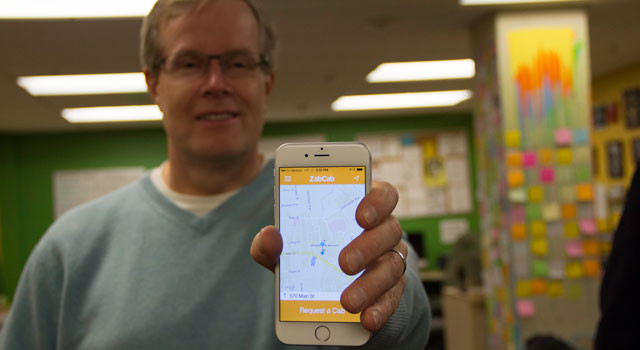 Martin Heikel is the CEO and co-founder of Flat Iron Apps LLC, which created the ZabCab app. .

The app first launched in Manhattan in 2012, then it was shut down and re-launched in Burlington Dec. 10.

A 2012 pilot program in Manhattan allowed for apps such as Uber and ZabCab to launch, according to the New York City Taxi and Limousine Commission.

This pilot program was shut down after a Manhattan Supreme Court case brought to attention a decades old regulation that banned the ability for yellow taxicab drivers to prearrange rides, according to the Taxi and Limousine Commission.

In June 2013, the pilot program started up again, according to the Commission.

In order to be a pilot member, the Taxi and Limousine Commission wanted a lot of data from ZabCab, including where people were when they downloaded the app and when people used the app, Heikel said.

“It was just an overreach on privacy concern for our passengers and I didn’t want to roll out under those conditions,” Heikel said. “Some companies like Uber were fine with it, but we weren’t. Because it was a pilot, we also didn’t know how long it would last.”

One difference between the recently launched Uber app in Burlington and Zabcab is that Zabcab is operating legally, Heikel said.

“I know that they have a cease and desist order in [Burlington] as they do in many cities,” Heikel said.

However, there was no cease and desist order in Burlington, according to Uber Technologies.

“To clarify, for UberX – our ridesharing option available in Burlington – we partner with individual drivers like you or me who use their personal vehicles for rides,” Uber said.  “Existing regulations don’t account for innovative options like ridesharing.  We’ve had productive conversations with city officials and look forward to finding a permanent home for Uber in Burlington.”

In the letter, Blackwood writes that “the administration is willing to work with Uber to try to reach an interim operating agreement, as Uber has done with other communities, that addresses both of our needs.”

“However, until such an agreement is reached, Uber and its drivers are operating in violation of the City’s ordinances,” Blackwood said in the letter.

This is the ordinance that Uber is not cooperating with, according to Blackwood’s letter.