No deal between nurses and UVM Medical Center 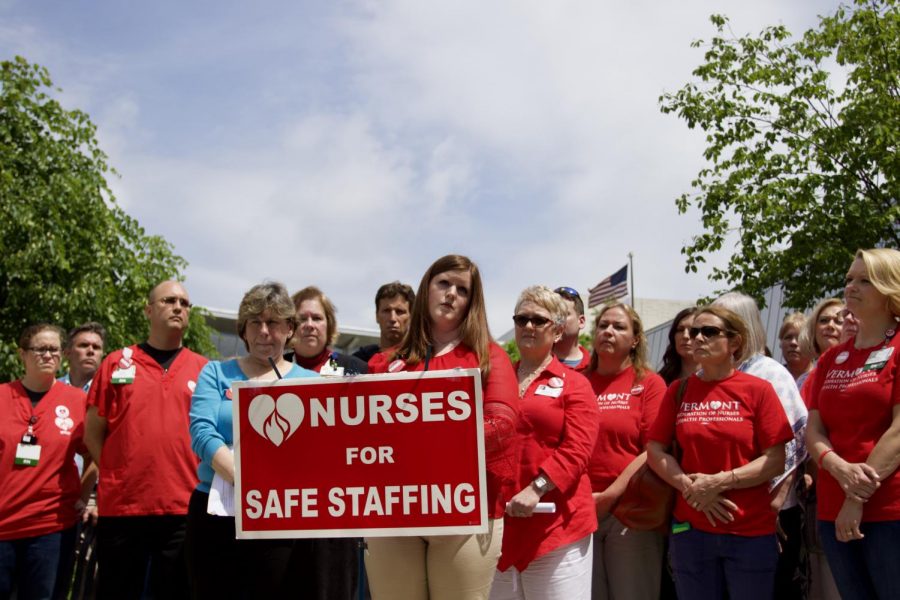 The announcement came at a June 1 community meeting outside the Medical Center that followed the last session of scheduled negotiations. The nurses have been in negotiations with the UVM Medical Center since the end of March over their annual contracts.

MacMillian said there is a lot of work left to be done before the nurses’ contracts expire July 9.

In a June 1 email to the Cynic, Sharon Schroeder, vice president of communications for the union, described a “collapse” in negotiations.

A large group of nurses and supporters walked into the auditorium where negotiation talks were held. When the medical center’s bargaining team saw this, “negotiations collapsed for the day,” according to the email.

The announcement came just six hours after a press conference where the nurses announced the filing of 20 unfair labor complaints against UVMMC.

The complaints against UVMMC include unlawful refusal to negotiate mandatory subjects of bargaining, unlawful removal of union signs and public intimidation of employees for posting union information.

Sarah Ferguson, a registered nurse at UVMMC, shared the news at the press conference. Nurses in many units within the medical center have experienced “intimidation tactics” since the start of negotiations, Ferguson said.

Within her own unit, Ferguson’s nursing manager made a fellow nurse remove her button that supported the union, she said.

A combination of understaffing and low pay make nurses’ jobs difficult at UVMMC, said Anna Westerville, a nurse practitioner in the urology department.

In many specialty departments like urology, patients have to wait for extended periods of time, often months, before they can be seen due to the nursing gaps, Westerville said.

A colleague of Westerville’s that works on the emergency surgery and trauma team has been working between 50-60 hours per week, a 20-hour overage, for the past two years.

“They have lived in a constant state of stress and fear that they are going to make errors and harm their patients,” she said.

The gap was filled when it was opened to physicians assistant applicants and the salary was increased by $20 thousand, Westerville said.

Westerville said at a one bargaining meeting she saw data that showed a rising amount of revenue and that the medical center is on firm financial footing, she said. The data was shown to the nurses by Chief Financial Officer Rick Vincent, she said.

The data showed that more revenue was brought in because of the nurses, but the nurses were not the ones seeing the financial award.

“[The UVM Medical Center] is turning around and telling us not that they are unable to use that money for increases in wages and benefits for the employees that made the money, but they are unwilling to do so,” Westerville said.

American labor leader Randi Weingarten, the president of the American Federation of Teachers,  also spoke at the press conference.

Weingarten came to Vermont to challenge the UVM Medical Center’s administration to care for their community, she said.

“This administration seems to only care about it self as opposed to the community and the people that have made it successful” Weingarten said. “That is not the Vermont State of mind.”

Weingarten described the scene at UVMMC as one of a crisis in the making.

“You have a choice, work with us or we will make sure the community knows you’re creating a crisis” Weingarten said.

At the press conference MacMillian said UVMMC has offered the nurses a 1 percent raise over three years. The hospital has not been responsive to the nurses’ concerns, she said.