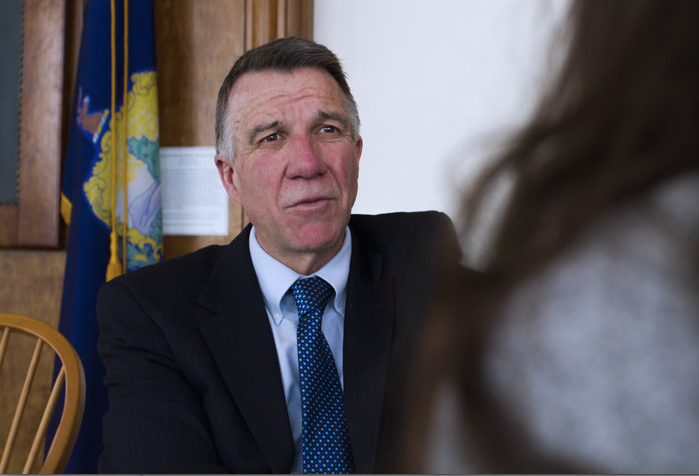 Gov. Phil Scott discusses his past at UVM and his path to the Vermont Statehouse in 2017.

Some — but not all — of UVM’s nearly 8,000 out-of-state students could get a vaccine in Vermont, but only if they intend to stay for the entire summer, according to Governor Phil Scott.

Despite this new guidance, some students have already found ways to get their vaccinations regardless.

Vermont’s current vaccination plan only allows out-of-state students who intend to stay in Vermont this summer to register for their vaccine April 19 with their peers, stated Jason Maulucci, Gov. Scott’s press secretary, in a March 31 press release.

Other out-of-state students must wait for more information from Vermont officials, and are encouraged to get vaccinated in their home state instead.

“College students who are residents of another state, and who do not intend to stay in Vermont for the summer, do not meet the current residency requirement at this time,” Maulucci stated in the press release.

Maulucci said the state expects to expand registration for COVID vaccines to all college students April 30. Vermont officials are currently determining the circumstances under which they could administer vaccines to other out-of-staters.

However, Deputy Commissioner Kelly Dougherty recommended out-of-state students returning to their home state for the summer do not attempt to be vaccinated in Vermont.

“The timeline does not allow enough time for students to be fully vaccinated before the spring term ends,” she stated in a March 30 email. “Because of the need to be sure you get the appropriate second dose (i.e., same vaccine) at the appropriate time (i.e., we recommend that people get their first and second dose at the same location).”

The state is prioritizing Vermonters for the vaccine, especially high school seniors who will otherwise miss out on normal celebrations of their achievements, Maulucci stated.

“A lot of it will depend on the supply,” Governor Phil Scott said at the March 24 press conference. “From my standpoint, I would want to make sure that we had vaccines available to anyone who wanted them, even those going to college when the time is appropriate.”

Scott did not mention at the press conference that students planning on staying for the summer would be eligible in less than three weeks, or that vaccines for all out-of-state students would open up April 30.

Despite these guidelines, some out-of-state students have already found loopholes in the state’s system, and will be fully vaccinated before their Vermont peers.

Among them is first-year Thomas Sykes, who used his dorm address in Harris to qualify for a vaccine in Montpelier.

Sykes teaches sailing in his home state, Massachusetts, which makes him eligible for the first phase of vaccinations as an educator.

When he put his information into the Vermont Department of Health’s website, he said his phone’s area code revealed his non resident status.

Sykes said he then switched to the pharmacy portal, and fronted his dorm address as his legal address. It accepted his information, and he received his first shot on March 28.

“I’m encouraging all of my friends who are camp counselors to do exactly what I did,” Sykes said. “It’s gone smoothly for them as well.”

Sophomore Sam Joyner also used his dorm address to book a vaccine appointment, despite his residency in Virginia.

Joyner said he has a high risk condition that qualified him for the vaccine in Virginia, but not in Vermont.

He was afraid that he would become exposed to COVID-19 if he traveled home for an appointment, so he called the Virginia Department of Health to see what his options were, he said.

When Joyner called the Virginia Department of Health, he was advised to register in Vermont by using his school address and to leave the spot blank when it asked for his physician, he said.

“I fibbed a little bit on the sheet but only and solely through what the Department of Health was telling me to do,” he said.

There are two ways for people to get vaccinated in Vermont, according to the Department of Health website. People can either register for vaccines through a pharmacy or go through the state directly.

People can sign up for vaccines on the Department of Health’s website. Vaccines registered there will be administered at state clinics, Costco and Walmart.

The alternative option is to get a vaccine at Kinney drugs, CVS or Walgreens by visiting their sites directly. These pharmacies still abide by the state’s eligibility criteria but they have separate registration systems, said Dougherty in a March 27 interview with the Cynic.

The vaccination plan is subject to change with the state’s supply, stated Ben Truman, public health communications officer, in a March 30 email to the Cynic.

“It may be that over the coming weeks our ability to vaccinate people such as non-Vermont resident students who attend school in the state can change,” the email stated.

Additionally, starting April 1, all BIPOC individuals and their households will be eligible for the vaccine regardless of age, stated Dougherty in a March 30 email.

Senior Christa Guzmán was able to get her vaccine through a BIPOC vaccine clinic despite her out-of-state status.

She found out about the clinic through Instagram and received her first dose of the Pfizer vaccine at St. Paul’s Cathedral on March 20.

“A lot of newspapers aren’t making this a big deal, but it is,” Guzmán said. “A lot of BIPOC are finding out about it through other friends or through like Instagram, instead of it being spoken about more.”

UVM has not yet broadly communicated vaccine policies for out-of-state students with the student body. Instead, it echoed statements from the state that all Vermonters are expected to be vaccinated by July 1 in a March 25 email to students.

Administration is waiting to communicate specific information on how they will administer tests to students for when they get more information from the state, stated Gary Derr, vice president for operations and public safety, in a March 22 email to the Cynic.

“We will share that information once we get final details from the state,” the email stated. “We will also assist with communications efforts to encourage students to get vaccinated.”