Over a thousand gather at green on 4/20 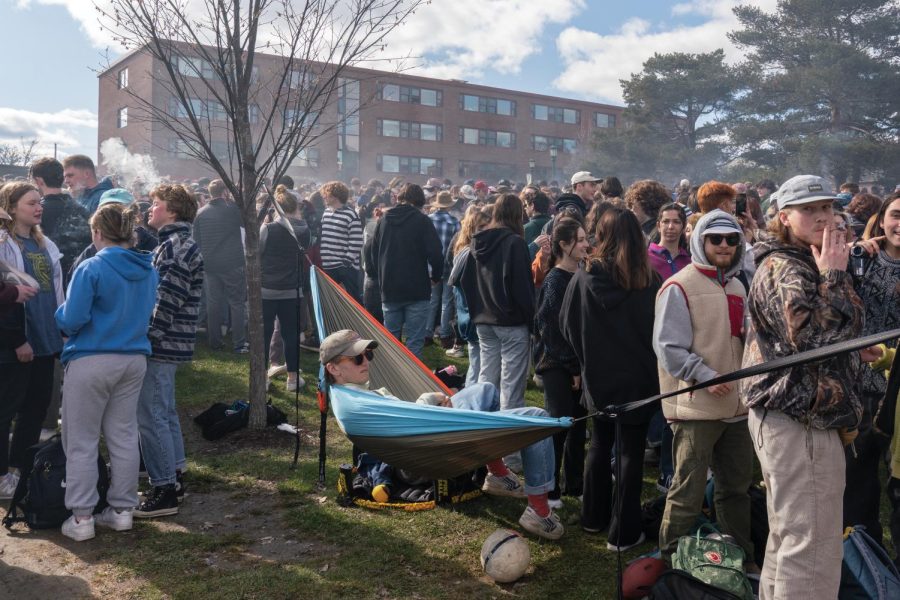 Students gather on the Redstone green for 4/20 festivities April 20.

Over a thousand students gathered on the Redstone green at 4:20 p.m. April 20 in celebration of the longstanding tradition of smoking cannabis on 4/20, said UVM Police Chief Tim Bilodeau.

The turnout demonstrated a marked increase in attendance as compared to early pandemic 4/20 celebrations in 2020 and 2021. While Bilodeau could not specify the exact headcounts from the previous years, this year’s gathering surpassed the others, he said.

Smoking cannabis also proved to be a safety concern, as three people were brought to the emergency room at the medical center for issues related to cannabis intake, Bilodeau said.

Fellow students brought the conditions of the hospitalized students to the police, Bilodeau said. Due to HIPAA laws, he could not elaborate on their conditions.

When the highly anticipated countdown to 4:20 p.m. concluded, a giant plume of smoke billowed up into the air, just as it had in years prior.

Students poured onto the Redstone green bringing activities such as picnics and die tables to play games on but UVM Police Services informed them additional activities were a safety concern since it encouraged a larger crowd, Bilodeau said.

Since previous COVID-19 restrictions such as masking, social distancing and capacity limits were lifted, this was the first normal 4/20 in two years, Bilodeau said.

“It’s always nice to be at a public event and see people gather. […] It’s college kids being rowdy. I’m not going to see this anywhere else,” said senior Sophie Feldman.

While she did not partake in smoking, Feldman said it was fun to watch because of the sheer novelty of the gathering and how embedded 4/20 is in UVM’s culture.

First-year Gus Powers said he came to the green because he and his friends simply love cannabis.

“I think weed is awesome,” Powers said. “Especially in a state that is promoting weed for other reasons than what we’re doing now, for health benefits and all sorts of stuff. It’s a drug that’s gonna be legalized all through America pretty soon.”

Powers and his friend, sophomore Justin Donaldson, rolled a total of 35 pre-rolls and brought them to the green, he said.

Donaldson and Powers said it felt great to be out on the green and get the community together.

However, they were disappointed in how quickly the event ended, Powers said. Donaldson and Powers hoped the congregation would last for more than the 15 minutes in which it occurred.

The short timeframe resulted from UVM Police Services noticing the crowd beginning to thin and subsequently encouraging students to move on, as the use of cannabis on UVM campus is illegal and is a student conduct violation, Bilodeau said.

Still, for large, dense crowds, UVM Police Services streamline efforts towards prioritizing safety and wellness, Bilodeau said. The police did not issue any sanctions at the event.