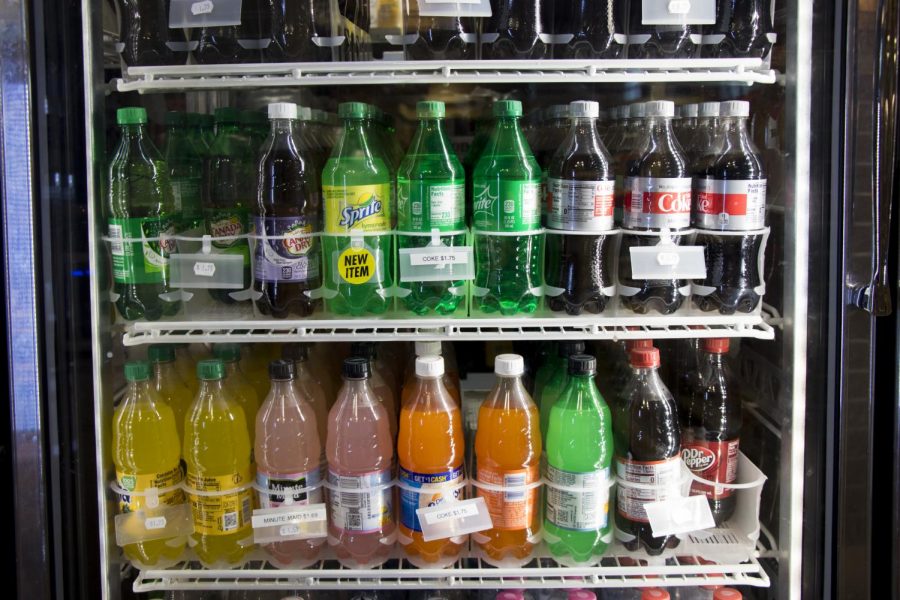 Different beverages for sale in plastic bottles sit in coolers in Redstone Marketplace, Nov. 20. A University-wide ban was enacted in 2013 to ban the sale of plastic water bottles.

Despite six years passing since UVM banned the sale of bottled water, the ban’s origin and impact remains controversial.

The ban, intended as an act of investment into local water, may have caused students to drink more sugary beverages and buy more plastic, single-use containers, according to the UVM Office of Sustainability website.

Gioia Thompson, director of sustainability at UVM Dining, said that the original intention of the ban was different than what people might believe today.

A student research study, funded by the Office of Sustainability and in coordination with the Post-Landfill Action Network, intends to evaluate how to reduce waste on campus through infrastructural, behavioral and subsistence changes.

The study will be published in January 2020 if not sooner, Thompson said.

The research, published in the American Journal of Public Health, showed that the consumption of sugary beverages increased on campus.

In addition to an increase in sugary beverages, the 2015 Honors College thesis further found no decrease in the number of single-use containers used following the ban.

“Soft drinks require twice as much plastic as single-use water bottles and energy drinks four times as much,” Johnson said. “Why ban the healthy choice?”

Vermont Students for Environmental Protection originally sponsored the bill, and UVM became the first public university to ban the sale of bottled water.

Junior and VSTEP President Caroline Gilman said that there is a discussion of starting a petition to move toward zero-waste as early as next semester.

“The ban was a great first step, but it definitely isn’t enough for the environment,” Gilman said.

VSTEP, in coordination with Eco-Reps and other environmental clubs and organizations on campus, work to limit and eventually ban the use of single-use containers and bottles on campus, Gilman said.