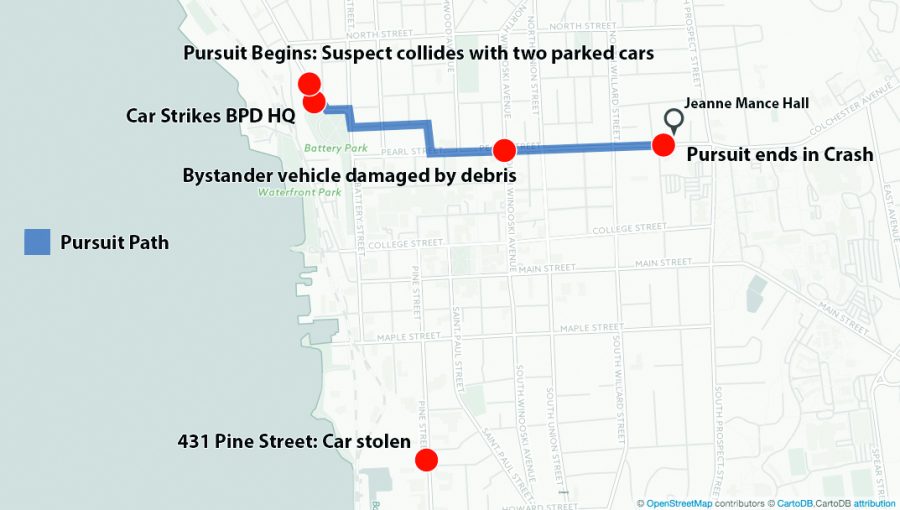 A destructive high-speed chase involving a stolen car came to a stop near Jeanne Mance after colliding with a Domino’s delivery car.

Lt. Paul Glynn then saw the car speeding north on North Avenue, before colliding with two parked cars, totaling both the vehicles, according to the press release.

Another vehicle was damaged by debris flying off of the stolen car on the corner of Pearl Street and South Winooski Avenue.

The chase came to an end in front of Taft School after the vehicle collided with a privately owned car being used for Domino’s delivery, according to the press release.

Jeanne Mance Hall is across the street from where the chase ended, and the scene outside caught the eye of some students.

“The crash happened so suddenly and soon everyone on my floor was alerted to the fact that police were brandishing guns outside,” sophomore Kira Nemeth said. “We were all glued to the windows waiting for whoever crashed into the Domino’s car to get out.”

Students scrambled to look out the windows to see what was going on, sophomore Michael Daley said.

“There was a sufficient amount of noise as a result of the excitement,” Daley said. “People were shouting and loudly debating what was occurring across the street as it was happening.”

“Once it became apparent that there were firearms in- volved, the RA on duty began to warn students to avoid the windows in fear of a violent response from the driver,” he said.

Junior Clarence Ng is an RA in Jeanne Mance and was working the night of the incident.

“Many residents in the building heard the screeching of tires, the sirens of police and, ultimately, the crash,” Ng said.

“I could see the police with their weapons drawn facing the [car],” he said. “It was scary for sure.”

Bruce Bovat, BPD deputy chief of operations, said they received many calls from people thinking that officers drew firearms out of their holsters without knowing what they were facing.

“[The officers] did a really good job of slowing the situation down, containing the situ- ation,” Bovat said.

Despite police attempts to communicate with her, Martin was unresponsive and wouldn’t get out of the car, he said.

After about five minutes, officers were able to position themselves so they could deploy pepper-balls into the vehicle, Bovat said.

“At this point, keep in mind, they have no idea who this person is, why they were eluding [the officers], what condition they’re under, if they have any weapons in the car,” he said.

They then decided to use nonlethal beanbags, discharged from a rifle into the suspect’s thighs twice, Bovat said.

This caused Martin enough pain that she communicated with the officers, who were able to remove her from the car without further incident, he said.

Officers did not suspect Martin was under the influence of drugs or alcohol, which the UVM Medical Center confirmed after she was taken to the emergency room for minor injuries, Bovat said.

“We think that the driving force for this person at this time was that they were suffering from some sort of mental health anguish or incapacity,” he said.