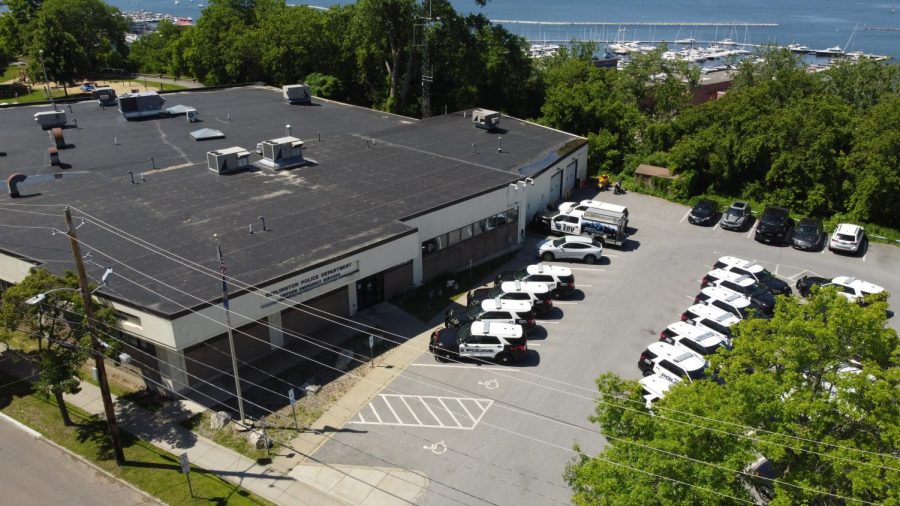 Police cars line up in front of the Burlington Police Department entrance Jun 20.

A new patrolling strategy will focus on the downtown area to prepare for an anticipated increase in crime, Mayor Weinberger said in a May 19 press conference.

“Too often last summer we experienced disruptive, intimidating and even dangerous incidents in City Hall Park and on the Marketplace,” Weinberger said. “With a declining number of officers, the city struggled to maintain a public safety presence.”

The City Center Plan, an extension of the Downtown Safety and Activation Plan, prioritizes the City Center Area, a circle that surrounds the downtown core, where more than 50% of calls needing service are based, Murad said.

The City Center Plan will consist of two police officers and two Community Service Officers stationed within the City Center Area, as well as two roving officers in the North and South end, he said.

The CSOs’ role has recently expanded to compensate for the Burlington Police Department’s decline in staffing over the last few years, he said.

CSO members have the authority to issue municipal tickets pertaining to noise, animal control and open containers, according to a Jun. 1 newsletter from Weinberger.

The plan will supplement additional public resources in place of police officers, such as Beach and Park Patrol Officers, Urban Park Rangers and Community Service Liaisons, the newsletter stated.

Street Outreach is a program through the Howard Center that provides services to aid mental health, developmental disability and substance abuse within Chittenden County, according to the Howard Center website.

“[CSLs] biggest role is once [a person in crisis] has been approached by street outreach […] it’s up to the CSL to assist them to ensure they get those services and continue with those services, which has been very successful so far,” Wade Labrecque, deputy chief of Burlington Police, said.

The CSL staff also works with people in homeless encampments by assisting people in finding housing, financial aid and escorting them off of private property areas, he said.

“[CSL members] do take some calls away from the officers that would normally have had to go through all of [them],” Labrecque said. “So that certainly helps since our staffing is basically cut by two-thirds almost”.

In June 2020, demand from Progressive members of the Burlington City Council resulted in the Burlington police force shrinking by 30%, according to a June 30 VTDigger article.

Last year, the City Council approved the BPD to increase their hires to up to 87 officers, according to an Oct. 19 2021 SevenDaysVT article.

The department has 54 effective deployment officers, including supervisors and detectives, that are currently working, Labrecque said.

“Nobody wants to be a police officer right now,” Labrecque said. “The State Police are having as much trouble as we are hiring people and that’s never a good sign.”

The Vermont State Police are facing a deficiency of 48 out of their 333 established officer positions. 51 other police departments in the state of Vermont reported they are also trying to satisfy unfulfilled positions, according to a Jun. 12 VTDigger article.

Labrecque said he expects that the department will take roughly five to ten years to fully recover from the reduction, due to potential retirements and the hiring and training process.

“If we’re lucky maybe three to four [years…], but realistically with the police academy and the amount of time it takes to hire an officer […] you’re talking 30 weeks over half a year of just training to be a solo police officer,” he said.

BPD officers felt the City Council did not support them, Murad said in an interview with the Cynic.

“[Officers that left] stated [they felt unsupported] in their paperwork, that the lack of political support is dragging them out of the city and onto other professions,” he said.

Almost a year after the cutbacks, the Burlington police kickstarted their Priority Policing Plan in May 2021 to adapt to their recent loss in staffing, which declares that officers will respond to calls based on urgency to avoid gaps in coverage, according to a May 2021 VTDigger article.

Certain calls from community members will emit a CSO response or pass to online reporting as opposed to an in-person response, Murad said.

“People are upset and concerned about the number of officers available, they don’t like not getting a response,” Murad said. “I hate not being able to send trained, equip police officers to every call.”

Murad said while he considers the CSO members as a valuable addition, the limitations of their enforcement power do not fulfill the remaining response capacity.