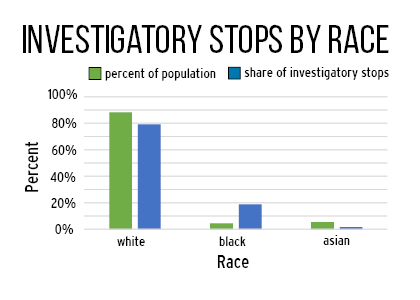 A UVM economics professor presented a study to the Burlington City Council April 11 showing differences in how races are treated by Burlington police officers.

Stephanie Seguino, a professor at UVM since 2007, has released three previous reports on this subject for various Vermont agencies, and has been working on this report, to be released April 27, with Cornell University professor Nancy Brooks since early January, Seguino said.

“Ultimately, behavior is very related to culture in a department,” Seguino said. “Racial disparities can be tolerated or even encouraged within a department.”

The study focuses on anti-Black bias, she said.

African-Americans make up 4.5 percent of the Burlington population, but were 18.8 percent of those pulled over by police officers for investigatory stops, according to the presentation.

In investigatory stops, a police officer pulls someone over because they may be suspicious of a civil offense, but have no hard evidence before pulling them over.

Brooks and Seguino focused their study on this type of stop, as it gives police officers the most freedom of whom to stop and whom to search, Seguino said.

“That stop in particular is more likely to be a strong indicator of racial bias in the police officer,” she said.

Black drivers are 2.5 times more likely to be searched than white drivers, according to Seguino’s presentation.

“Racial disparities within the Burlington Police Department is particularly severe among black males,” Seguino said at the meeting.

“We are trying to offer data and analysis of data as a way to help police depts reduce disparities.”

“We are not trying to punish people or disparage people,” Seguino said. “We are trying to rationally explore what is a complicated but pervasive problem in a lot of police departments.”

The study is mostly policy research, Seguino said. That is why it was presented to the city council, because it is an oversight institution of the police department, she said. 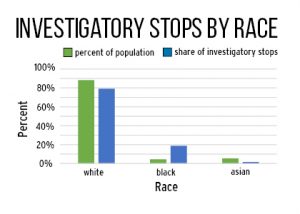 “For me the takeaway is that Burlington and the state of Vermont need to do better,” Ward 1 city councillor Sharon Foley-Bushor said at the city council meeting. “Having this tracking and having this presented to us on an annual basis is incredibly helpful.”

“I think a person rolling through a stop sign or changing a lane without signalling, regardless of their race, deserves a warning or ticket at an equal rate,” del Pozo said at the meeting.

“I don’t accept that the smell of marijuana emanates from black drivers’ cars more than white drivers’ cars percentage-wise,” del Pozo said. “This is Vermont.”

Del Pozo also said Seguino has been invited to do the same presentation in front of his supervisors at the police department.

Last month, Burlington police officers were able to see their own data and their own performance for the first time ever, which will give them a chance to reflect on their car-stop decisions, del Pozo said.

“I’m more troubled by the thousands of motorists who do or don’t receive warnings rather than the one person a month who is searched for probable cause, although I do really want to look at that disparity as well,” he said.

Seguino said she suggested the departments develop a warning system.

She said it is especially difficult because it is an all-white police force.