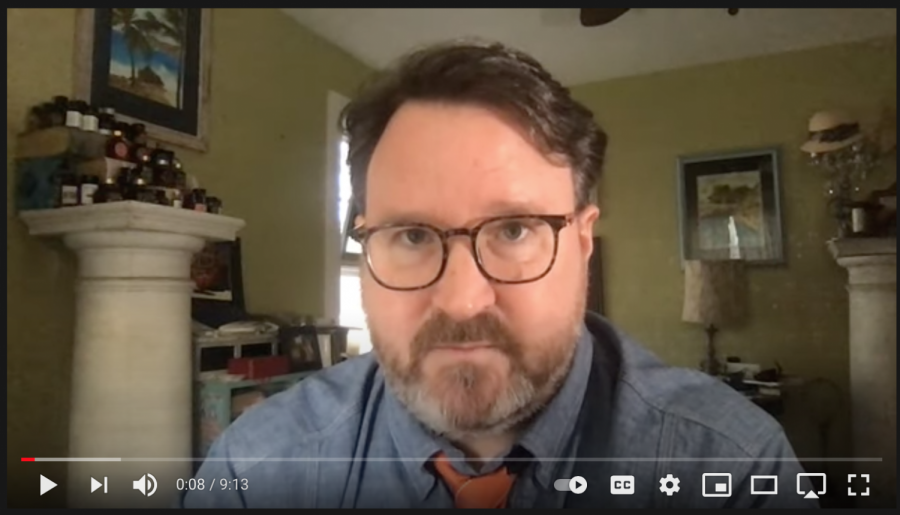 UVM Professor Aaron Kindsvatter records himself inside his home for his first video titled “Racism and the Secular Religion at the University of Vermont.”

Editor’s note: This article was updated at 8:46 p.m. Jan. 18 to correct a counting error in the headline.

Following calls for his resignation, former CESS professor Aaron Kindsvatter resigned Aug. 15, 2021, according to a Jan. 12 email from Jane Okech, associate dean of the College of Education and Social Sciences.

A series of videos he uploaded to YouTube about perceived discrimination against white people at UVM sparked the calls for resignation in March 2021. After resigning, he moved to the private sector with his own psychotherapy practice in the state of Vermont, according to a Jan. 12 email from Kindsvatter.

In a March 16, 2021 YouTube video, Kindsvatter said he would not resign.

“‘Would I please resign?’ No, nope, not a chance. Never gonna happen; no way. I hadn’t even thought about it, not for one second; no,” he said, according to a March 16 2021 Cynic article.

Kindsvatter stated he made his decision to leave UVM as a matter of conscience, in his email to the Cynic.

In his YouTube videos, Kindsvatter said he opposed some faculty training against racial biases, which he believed promote discrimination against white people, according to a March 15 2021 Cynic article.

Kindsvatter resigned because he felt it was immoral to continue teaching at UVM, according to Kindsvatter’s email.

“The administration’s statements played no part in my decision to leave,” he stated. “I simply lost faith that the University, the University administration or the faculty union (United Academics) had either the will or the capacity to provide, or even allow for, a liberal education based in critical thinking.”

“Counselors would be trained to use therapy sessions as a means to indoctrinate the vulnerable into a very unhealthy ideology,” Kindsvatter stated.

A.4.b states counselors should avoid imposing their own beliefs on their clients, especially if the counselor’s views go against the beliefs of the client, according to the 2014 American Counseling Association Code of Ethics.

Local comedian Jonny Wanzer posted a change.org petition Jan. 9 calling for the revocation of Kindsvatter’s practicing therapist license. The petition has 371 signatures as of Jan. 16.

In March 2021, Josephine Mercado ‘21, founder and then-president of UVM Sisters of Color, created an initial change.org petition calling for Kindsvatter’s resignation, following the upload of his YouTube video on March 8, 2021. The original petition has 3,491 signatures.

“Having conversations around anti-racism and acknowledging the role of whiteness in systemic racism has been supported by every department on campus,” the petition stated. “Kindsvatter’s ‘i-don’t-see-race’ mentality has been proven to be harmful towards any kind of societal racial justice.”

Neither Wanzer nor Mercado responded to the Cynic’s requests for comment.