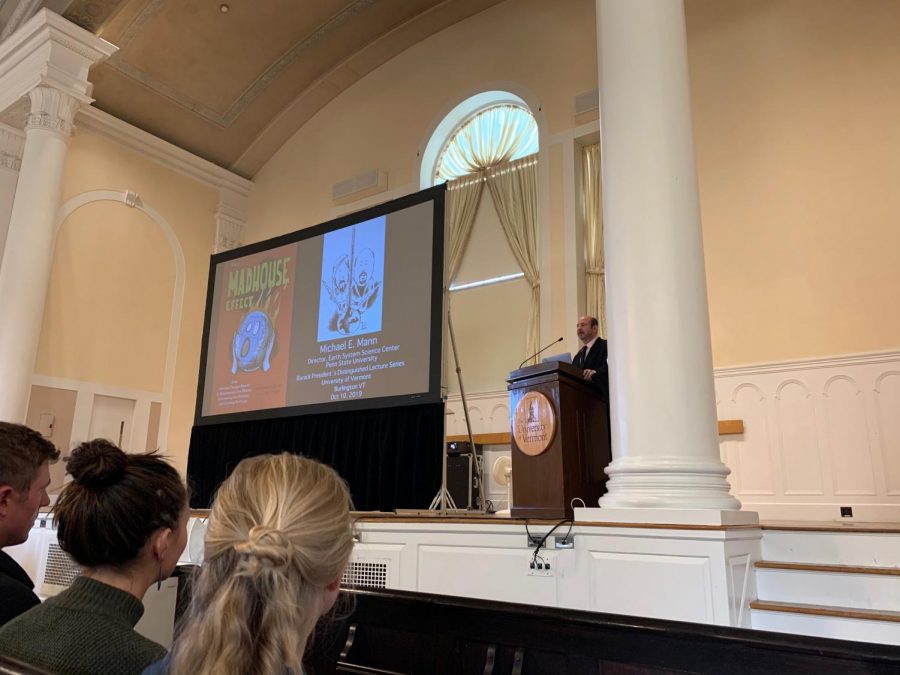 The packed crowd in Ira Allen Chapel braced themselves, preparing to listen to the dire forecast the speaker at the front of the room was about to give.

“Evidence for climate change is equal to evidence for gravity,” said Michael Mann, professor at The Pennsylvania State University and winner of the AAAS Public Engagement with Science Award and renowned for his work on spiking global temperatures, Oct. 10 to the crowd.

Mann has dedicated his career to finding the causes of natural disasters. During his talk, he shared his views based on collected data and research he’s worked on for the last several years.

“There are reasons why I expect the worst droughts, worst heat waves, worst wild fires and worst floods all in the same time,” Mann said. “We have seen that in recent years, it’s not a coincidence.”

Mann also discussed the consequences of the warming climate affecting sea levels which lead to an imbalanced climate system. Cyclones, hurricanes, tsunamis, tornados, heat waves and other phenomena are some of the consequences the earth is facing in result to climate change.

In addition, Mann spoke about how to address climate change in an age when the value of science and evidence is being questioned.

“We are in the madhouse now,” Mann said. “Using humor and satire, maybe we can cut through some of those ideological barriers when it comes to the issue of climate change.”

UVM’s Gund Institute, the Rubenstein School of Natural and Environmental resources and the departments of geology, geography and anthropology were responsible for bringing the event together, geology professor Paul Beirman said.

“It was a really great, digestible lecture,” she said. “I know that as someone that studies environmental science, it’s really hard to get these ideas across to people.”

Mann continues to remain optimistic about climate change because of the youth.

“The youth is taking a stand on climate change on levels that we have never seen before,” Mann said.