Protesters remain committed to demands despite inaction from City 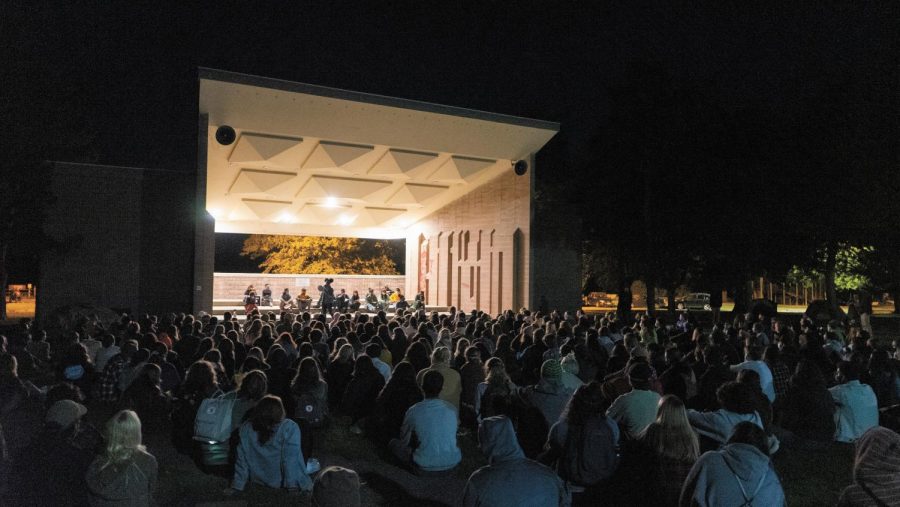 Protesters gather around the amphitheater at Battery Park Sept. 11 in the 18th consecutive night of protest.

As community members marched in black attire down Battery Street on their fifteenth consecutive day of protest last week, the mayor of Burlington spoke at an emergency meeting, unable to take action on protesters’ demands.

Despite the relentless push from activists that voiced their grievances for over two hours during the meeting, Blackwood said the situation is out of the city’s hands.

Protesters have been occupying Battery Park 24/7 and marching down Church Street every day at 6:30 p.m., saying the community will not be silenced until the local authorities terminate the three officers.

However, Blackwood explained during the meeting that according to Vermont State Law the Mayor and City Council do not have authority to hire or fire police officers, only the Police Chief does.

She also explained that the city faces numerous other barriers, like the legality of firing an officer for an incident that has already been evaluated.

“Once a matter has gone through a disciplinary matter the government can’t take further action against a person arising out of that same incident, and that’s one of the issues here,” Blackwood said.

She went on to discuss how the councilors have limited legal options and advised that the city not take further action against these officers because it would expose the city to, “significant legal actions and potentially substantial damages, as well as possible reinstatement of the officers or other injunctive remedies.”

Several protesters that joined the meeting during public comment spoke at the march later that night and expressed their dissatisfaction with the response of decision makers during the meeting.

“Don’t tell us what you can’t do because we see right through it. We know what you’re capable of,” said one speakers at the protest later that night.

Although the city was unable to meet protesters’ demands of firing the three officers, the Council did pass a resolution to charge the city’s charter change committee in assessing how it could change who makes decisions regarding police discipline.

Other activists that rejoined the protest later that night expressed doubt that the Mayor could not force the officers out.

“Maybe you can’t fire someone but you sure as hell can make someone resign, you’ve done it before,” said one organizer of the multi-day demonstration.

As the group marched towards City Hall Tuesday night expressing their frustration at the meeting, several speakers encouraged their white allies to bring more people to the protest in an effort to amplify their demands.

The group of leaders asked community members to keep working until their demands are met, reiterating the promise that the protests will not stop until the three cops are fired.

“I know it’s fucked up that people won’t listen to us but they listen to you,” said one organizer, addressing the white protesters in the crowd. “And I need you to advocate for us in every and any way possible.”

Despite the serious tone of the march, protest organizers afterwards led community members in song and dance, explaining to the crowd that it is important for them to connect with each other and experience joy together.

“Black joy is so important especially in a time like this,” said one organizer.

Protesters have vowed they will continue to occupy Battery Park 24/7 and march daily at 6:30 p.m. until their demands are met. The protest entered its 22nd day Tuesday Sept. 15.

“As a person of color who has suffered from racism all my life, it astonishes me that the mayor and the members on this council say they support the elimination of systemic racism and yet have shown no intention to fire racist and violent cops Jason Bellavance, Cory Campbell and Joseph Corrrow,” said Isaac Lee, during his public comment Sept. 14.