The Vermont Cynic • May 16, 2021 • https://vtcynic.com/news/protestors-stand-in-solidarity-with-palestine-amidst-rising-tensions-at-uvm-and-across-the-globe/

Protestors stand in solidarity with Palestine, amidst rising tensions at UVM and across the globe 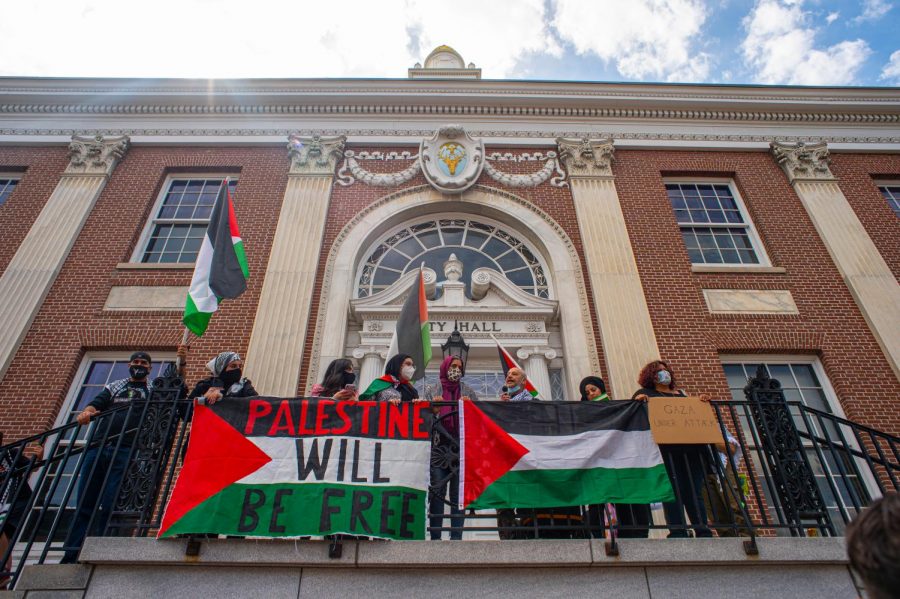 After meeting in Battery Park to listen to various speakers the protestors marched to City Hall May 15.

A crowd flooded the streets of downtown Burlington Saturday afternoon, calling for freedom and peace in Palestine, as tensions continued to heighten on campus and worldwide.

In other cities and towns all along the east coast, protesters gathered in solidarity with Palestine, according to a Decolonize Burlington Instagram post, the local social justice organization that organized the protest downtown on May 15. The protests were held in light of elevated violence that began last week.

The procession from Battery Park to City Hall drew in over 100 people, according to WCAX.

The protest was held on Nakba Day, the annual commemoration of a Palestinian catastrophe in 1948, in which hundreds of thousands of Palestinians were displaced from their homes and the state of Israel was created, according to the New York Times.

The speakers at City Hall highlighted the Israeli government’s mistreatment of Palestinians, including ethnic cleansing, murder and family separation. Cumulatively, the U.S. has provided Israel about $146 billion in bilateral military assistance and missile defense funding, according to the Congressional Research Service.

A former UVM student condemned UVM’s inaction and treatment of her during her time at the University, as she stood atop the steps of Burlington City Hall amidst a sea of people waving Palestinian flags.

“I was an outsider, my lived experience and trauma unwelcomed, my existence politicized, my identity as a Palestinian woman constantly stripped from me and left out of every conversation,” the speaker said. “Universities continue to perpetuate others’ claim to our land.”

The former student also referenced the birthright trips to Israel offered by UVM Hillel, which accepted funding from the Zionist organization Maccabee Task Force to take students to Israel and Palestine, according to a 2019 Cynic article.

The Maccabee Task Force has labeled itself a pro-Israel organization and stated it is against the Palestinian human rights movement that aims to boycott, divest from and sanction Israel, according to MTF’s website.

On May 12 @uvmhillel posted on Instagram addressing Jewish UVM students.

“I see you. Our Hillel hears you,” the post stated. “It can feel really hard to be Jewish publicly when there is conflict in Israel.”

Two days later Hillel made another post addressing the Jewish community of UVM.

“Based on vulgar and damaging social media posts yesterday from a student-run social media account, we facilitated a conversation with survivors and students with UVM’s Bias Response Team representatives,” the post stated.

The account Hillel was referring to was @shareyourstoryuvm, an account recently created to uplift the voices of survivors of sexual assault, abuse and harassment anonymously, according to their bio.

In a five part Instagram story created to respond to Hillel’s post, @shareyourstoryuvm apologized to the Jewish survivors in their community who believe their stances were harmful and anti-Semitic. Still, they stated they would not stand with Israel nor support Zionists.

Neither UVM Hillel nor @shareyourstoryuvm could be reached for additional comment.

Senior Cobalt Tolbert is part of the Jewish community and said the movement for liberation in Palestine has not been a key driver of antisemitism.

“It’s clear who the actual threat to Jews are, and it’s not the people who are calling for the end to this occupation,” Tolbert said.

The speakers also made a point to distinguish Judaism from Zionism.

“These are not Jewish values, these are Zionist values,” one speaker said.

Judaism is the world’s oldest monotheistic religion, while Zionism emerged much later, in the 1890s, according to Oxford Reference.

In 1975, the United Nations termed Zionism as “a form of racism and racial discrimination,” according to the U.N. Resolution on Zionism.

Zionism is the movement for the re-establishment, development and protection of a Jewish nation in what is now Israel, according to Oxford Languages. It was established as a political organization in the 1890s.

Palestinians say at least 145 people, including 41 children, have been killed in Gaza since the conflict erupted on Monday. Israel has reported 10 dead, including two children, according to WCAX.

The protesters also called for the shutdown of the Ben and Jerry’s franchise in Israeli colonies, and chanted “shame,” at the downtown storefront while marching down Church street.

Ben and Jerry’s is a local company, but their factory in Israel makes ice cream sold in a large supermarket chain in Israeli-only settlements. They sell their products solely in Israeli-occupied colonies in Palestine, according to Vermonters for Justice in Palestine, a local human rights organization.

Tolbert said that by basing their operation in new Jewish settlements and using Israeli-only roads, Ben and Jerry’s is legitimizing Israeli settler colonies, and doing nothing to support Palestine.

“Ben and Jerry’s are a bunch of Zionist motherfuckers,” one speaker said.

Rick, a member of Jewish Voice for Peace, spoke in solidarity with the protestors on the steps of City Hall, hands clasped with a Palestinian protester.

“Jewish communities must make a choice. Do we accede to a future living in denial and continue to allow apartheid, ethnic cleansing and massacre in our names, or do we engage with hard truths,” Rick said. “We choose the struggle for justice over silence.”

One of the leaders of the protest said the Israeli government thinks nobody cares about Palestine or their occupation of it. However, if people across the globe can stand up for Palestinians, real change could happen.

“There is such a need for international solidarity, especially from the U.S.,” Tolbert said.

Israel is the largest cumulative recipient of U.S. foreign assistance since World War II, according to the Congressional Research Service.

The movement and recognition surrounding the political violence against Palestinians have been growing, largely because people are filming the struggle, another speaker said.

A protester named Sarah spoke for Mo, a Palestinian in the U.S. who could not attend because Mo was being targeted by Homeland Security.

Mo’s statement called for people to end the use of the term “conflict,” when referring to Israel’s occupation of Palestine because it undermines the power imbalance of the situation.

Mo urged listeners in his statement to be careful when donating to Palestinian organizations, as the money often ends up in the hands of the Israeli government, to change profile pictures to a red background in solidarity, to stop the use of “Palestinian lives matter,” due to its oversimplification, and to speak out.

Protesters also called for the crowd to contact Vermont Senator Bernie Sanders in support of  H.R.2590, a bill promoting and protecting the human rights of Palestinians living under Israeli occupation, and ending U.S. taxpayer funding to the Israeli government, according to the Library of Congress.

“The Israeli government thinks that they are the only ones in this world,” Mo stated. “They think that no one cares about Palestine, and no one minds what they’re doing. If people across the globe can start to stand up for my people, then maybe we can get some real change.”