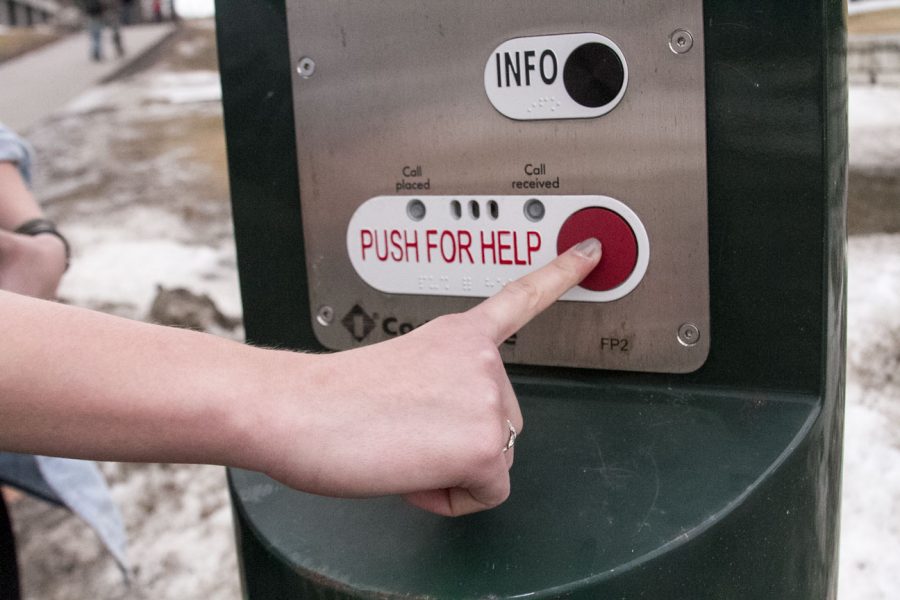 As Women’s History month, March commemorates generations of women who have fought for gender equity and against sexual abuse. Yet, such violence continues, especially on college campuses. UVM is no exception.

This semester three sexual assaults were reported to UVM police services, along with two domestic disturbances, two reports of stalking and on 12 separate occasions officers responded to blue light alarms, according to the Crime and Fire Log.

138 blue light units line UVM campus, with the goal of creating a safer environment. When pressed, the unit’s red button contacts police services through a recorded, official 911 line, according to the Physical Plant Department.

“It seems like there has been an increase in domestic violence on campus and it seems to be much more violent,” said Judy Rickstad, the Women’s Center’s campus victim’s advocate.

“This is more than we typically see by far,” Warrington said.

As students returned to campus after winter break, the Burlington Police Department issued a statement regarding two incidents in which young women were followed home from downtown, a Jan. 12 press release stated.

Two weeks later on the evening of Jan. 26, another woman was assaulted and robbed while in the Marketplace Parking Garage’s Bank Street stairwell, according to the Jan. 27 press release.

Students were notified Feb. 3, when a female student was groped by a “tall, thin, black male” while walking along Main Street around 2 a.m. Feb. 1, the press release stated.

That week a Facebook post circulated among students stating “multiple” other females were attacked that weekend, however they were not reported.

The post was originally publicly shared by senior Deniz Sehovic Feb. 2, then shared another 17 times.

In an effort to combat sexual violence, UVM will host the Dismantling Rape Culture Conference in the Davis Center April 9, as well as the annual Take Back the Night rally hosted by HOPE Works and the Women’s Center April 16.

While some sexual assaults are reported, many are not, Rickstad and Warrington said.

A female senior, who was sexually assaulted two weekends ago discussed why she chose not to report the incident.

The 23-year-old, who lives downtown, said she wishes to remain anonymous due to the intimate nature of the matter.

“People like to think Burlington is a much safer place than it is when it comes to these things,” she said. “But the reality is that it happens just as frequently here as it does other places. It’s a college town, you know. It’s definitely got its pocket of rape culture. I’ve met lots of women in Burlington who have experienced sexual assault in one form or another.”

The senior said she didn’t know the person who assaulted her. She met him at a bar downtown and they started talking. However, after that her memory starts to fade — she believes she may have been drugged.

“The next thing I knew I was in a car and I didn’t know where I was going,” she said. “Then I was in a motel and he was having sex with me. I started to cry and say no but he didn’t stop. Eventually I just let it happen because I just wanted it to be over.”

The senior said she chose not to report her assault because she is familiar with the process and that it can be “exhausting and retraumatizing.”

“Being disbelieved or blamed after that happens to you is really damaging for people, and since I had been drinking and talking to him at the bar I knew that there was a big possibility I could be victim-blamed,” she said.

“Victim blaming” is the notion that sexual assault is victim-provoked, that someone is “asking” to be assaulted due to their actions or dress, according the Women’s Center website.

No one’s behavior or dress gives another person the right to harm them, the website stated.

The senior said she doesn’t want her reasoning to not report her assault to deter others from reporting their own.

“It can be very tough and if you decide to take it on, make sure you have a lot of support and are emotionally prepared,” she said.

At UVM, assault survivors can contact Rickstad for free  and confidential support. Rickstad said she offers information and options, such as reporting to start a criminal process or reporting to the Title IX investigator to start the UVM conduct process.

“Although the system tries to be victim-friendly, it’s a very difficult process, some students want to just move on,” Rickstad said. “Also, there’s so much victim blaming that takes place it becomes easier for the victim to stay silent.”

Rickstad said it’s important to believe the survivor’s story and to validate that it was not their fault.

“Do not insist that they do things the way you might think they should do it,” she said. “Sexual assault is about power, which is taken away from victims when the crime occurs, do not take the rest of their power away.”

Though a majority of sexual assault survivors are female, many men are standing up against such violence, according to the Rape, Abuse and Incest National Network.

One of them is a self-described feminist and ally, senior Eric Davis.

Throughout his years at UVM Davis said he’s often asked by female friends to escort them home for safety concerns.

“It’s so unreasonable that someone would be brought to feeling so unsafe walking home in their own town,” he said.

Davis attributes his views to having inspirational male and female mentors.

“Guys need to have female mentors,” said Davis, who said he looks up to sociology professor Eleanor Miller.

“I’ve talked to women who claim that they’re not feminist and I ask them, ‘do you want equal rights?’ and they say ‘yeah,’ well then you’re a feminist,” Davis said.

“All it means is equality,” he said. “It doesn’t mean going out there saying ‘fuck men.’ We get a bad rep but all were asking for is equality. It’s not a women’s issue, it’s a society issue.”