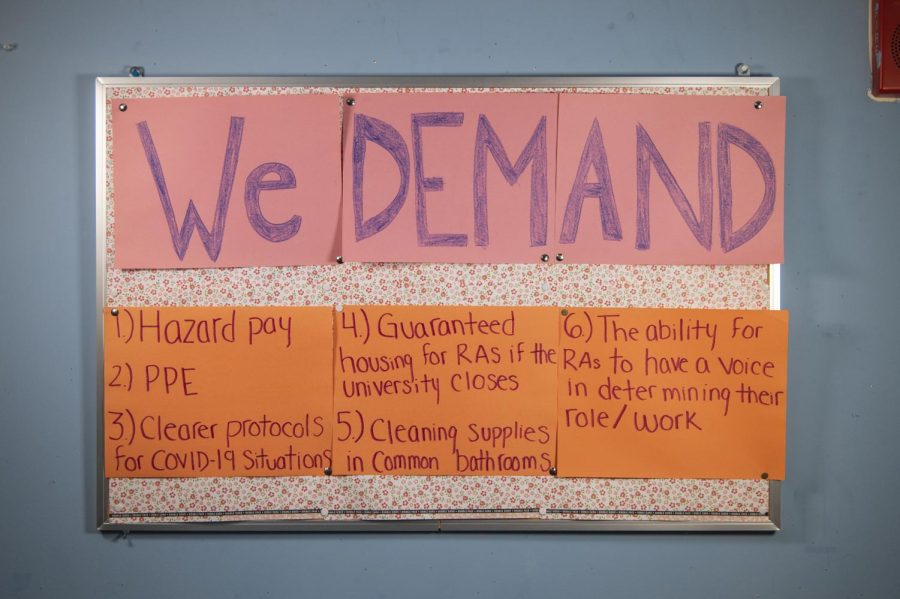 Frustrated with the lack of protection and guidelines for COVID-19 situations, a group of anonymous RAs sent a list of demands to the director of ResLife.

Three days later, they received a response that was “vague and frustrating,” according to one RA, that made no commitments to change any ResLife rules, instead claiming that most of the demands had already been met.

The group of RAs sent the list to Rafael Rodriguez, the executive director of ResLife Aug. 31 requesting hazard pay, personal protective equipment, clearer protocols surrounding COVID-19 situations, guaranteed housing for RAs if the University closes, cleaning supplies in common bathrooms and the ability for RAs to have a voice in determining their role.

Rodriguez responded in an email Sept. 2 to all RAs, stating that, “most of these items have already been addressed or are in progress,” and thanked the RAs that reached out, praising them for their hard work during the pandemic.

Some of the changes he highlighted included decreasing the frequency of room inspections to only twice a semester, no community walks and not entering student rooms to do a room check.

However, RAs said the email did not address their concerns, and that there have been ongoing issues since before students even arrived on campus.

The RAs in this story appear with single name pseudonyms as they feared they would lose their jobs for speaking out against ResLife.

“It feels like they don’t care because they’re not in this position,” Emily, an RA and Senior at UVM said. “They are home in their own homes, they don’t have to share bathrooms. It’s an out of sight, out of mind type of feeling.”

Emily, who has been an RA for two years, said that being an RA on the first weekend of school was stressful for her because she felt she wasn’t given clear guidelines on what to do concerning COVID-19.

“We went through training and it was kind of like they weren’t addressing COVID issues enough,” she said. “So the residents across campus were like ‘what do you do in this situation?’”

In an email response to the Cynic’s request for comment on this, Rodriguez stated that this wasn’t necessarily the case, and that training for RAs covered a wide range of topics including COVID-19.

“Representatives of the UVM Strong Working Group, including Gary Derr, Michelle Paavola, Annie Stevens and I met with the RAs alongside superiors prior to RA arrival to discuss the changes to their role,” he stated.

David, another RA, said there were other issues with the training as well, like how they were told that if a situation got out of control to call the police, something he didn’t feel was the right thing to do.

The lack of communication that Emily felt became apparent when students started hosting gatherings that broke the Green and Gold Promise, she said.

“[UVM’s guest policy] was written in a way that was not clear,” Emily said. “It could have been detailed much better, and that’s really important.”

According to an email from Provost Patty Prelock sent to students Sept.1, students cannot have any guests in their rooms. This guest policy is not included in the Green and Gold Promise.

Emily said that it was after the first weekend back that RAs decided to voice their opinion in an email written to ResLife requesting changes be made.

“Breaking up a party is no longer safe,” she said. “It’s always an exposure risk.”

Several RAs expressed frustration that they are on the front lines enforcing rules on students who aren’t complying with the Green and Gold Promise, all while not receiving hazard pay.

Hazard pay, according to the US Department of Labor website, is additional pay for performing hazardous duty or work involving physical hardship.

“The fact that nothing has changed other than that increased workload, that increased burden and the increased risk, now that we are in a pandemic,” David said. “We haven’t received additional compensation.”

Rodriguez responded to the request in his Sept. 2 email.

“In spite of the financial implications of our record low occupancy numbers we are still committed to offering the same number of RA positions as we understand how important and crucial this role is for many but will not change the current compensation” he said.

David said the response from Rodriguez was a lie.

“We wanted hazard pay and Raf responded saying we are still committed to offering the same number of RA positions. This isn’t true,” David said. “They didn’t offer the same amount. We’re understaffed.”

Rodriquez stated that with the exception of buildings taken off-line for isolation spaces that they offered the same number.

“However, we do have a handful of vacancies which the team is working on filling,” he stated.

David said that there is a pattern with upper ResLife in that when RAs voice their concerns, they will say that changes are being made, but that nothing ever changes.

“It’s like we get talked in circles,” he said.

Emily said that in another instance, some RAs were upset that not all RAs were given proper PPE, pointing out that some ResLife employees in dorms such as CCRH, did get face shields while others had to rely on their own face masks night after night.

Rodriguez stated in an email response to the Cynic that gloves, hand sanitizer, and disinfectant wipes for the RA rooms and Front Desk have been provided to RAs and that face shields have been recently deemed as an unacceptable type of PPE by Risk Management.

“The equipment provided reflects necessary PPE as determined by UVM Risks Management based on the type of work/activity being performed” he stated. “Face shields have been recently deemed as an unacceptable type of PPE by Risk Management.”

The email sent to Rodriguez also complained about an incident in which someone was asked to locate vomit, which Rodriguez responded to, stating he “wholeheartedly agree(s) RAs should not play any role in responding to vomit in the halls aside from reporting it up to ensure it is being addressed.”

Another issue was guaranteed housing, something that David thinks is important because for some people, this housing is all that they have.

“The only way he responded was like ‘okay, you can just apply for it… and maybe you’ll get it,” he said. “Which I thought was pretty troubling.”

Many RAs feel like they are on the receiving end of anger that they don’t deserve and didn’t ask for.

“We are at the receiving end of all of the built up frustration around this whole situation,” Katie, another RA said. “We don’t want to be seen as a police force, we are here to build the community, not destroy it.”

As for the next steps, the group of RAs is trying to schedule a meeting with ResLife to see if having a face-to-face conversation does anything.

David said that just because the RAs got an email response that they are not going to stop.

“We are going to keep trying to advocate for ourselves until we know for ourselves, our peers and for everyone’s safety because we are the ones enforcing the stuff” he said. “We are gonna advocate for that until something is changed and the conditions are better.”