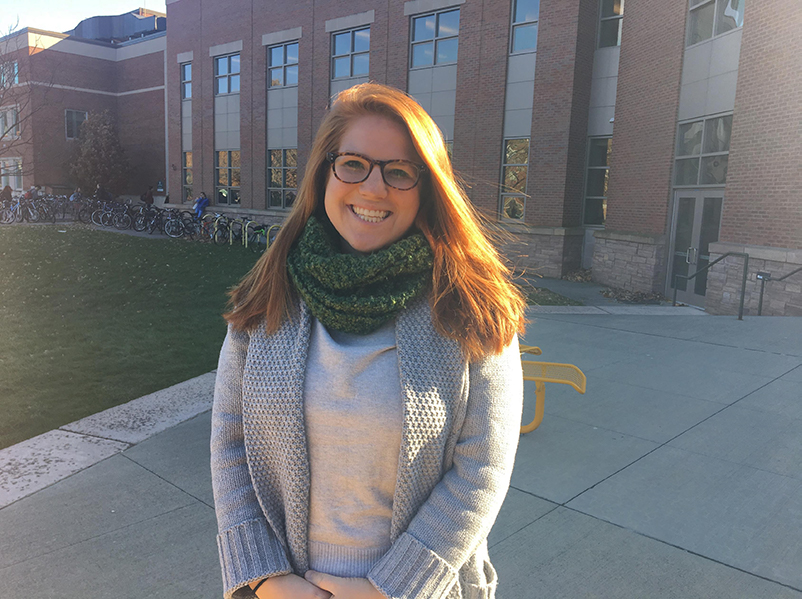 The new LivingWell sexual health educator is willing to talk loudly about sex in the middle of the Davis Center.

She joined the UVM community Nov. 6 and plans to emphasize educational topics that students are interested in, she said.

She wants comprehensive sexuality education on a college level, she said.

This includes events like contraception workshops and condom demos, as well as discussions about intimacy, relationships and breakups, Emerson said.

“We should be able to talk about pleasure,” she said. “Where are the classes on that? I think we could create a really radical space.”

Emerson also wants to bring visibility to issues that affect the LGBTQ+ community, she said.

“People talk about transgender and nonbinary identities as if it’s a new thing or a trend,” Emerson said. “It’s not. Native Americans had more than two genders, but we erased those people and the knowledge that came with them.

“There were certain powerful people who decided that for us and now we can reclaim it.”

Emerson grew up in San Jose, California and attended the University of Seattle for her undergraduate education.

She stayed in the Seattle area for three years after graduation working in AmeriCorps.

Emerson later moved to Philadelphia, where she received her masters of education in human sexuality studies.

“I spent an extra year [in the Philadelphia area] teaching gender and sexuality to fifth through 12th graders in an independent Quaker school,” Emerson said.

Emerson went on to write a curriculum for the school as her master’s project, titled “Practicing Consent Like a Quaker.” The school is still using it today, she said.

“I think for a lot of people in this kind of job, especially for something so niche,” Emerson said, “there are a lot of academic and professional reasons and also personal reasons.

“So on the personal side, when I was in middle school, I actually had abstinence-only-until-marriage sex education.”

When Emerson arrived atthe University of Seattle, she took a women’s studies and sexuality class and felt it was the first time people were really being honest with her, she said.

“You’re skeptical at first, but then you realize that you were really being lied to, and that was at a public school in a very liberal area,” Emerson said.

Emerson said she began to approach the idea of sexuality in an academic way by taking more sociology classes and eventually wrote her senior thesis on the social construction of virginity.

“I was able to interview a few sexuality educators, which was really my first view into the profession, and I was like ‘yup, that’s what I want to do,’” she said.

Emerson originally went into college wanting to pursue math education, but in her time teaching through AmeriCorps she realized that students wanted to learn about gender and sexuality, she said.

Emerson said she’s excited to start working with a new population of students at the college level.

Her job at UVM is going to be dictated by what students want, Emerson said.

She hopes students will request workshops and other programs they want to see at UVM, she said.

One of her goals is to shine a light on issues that she was sheltered from in her adolescence, she said.

“It’s ridiculous that I had to go through graduate school in sex-ed to learn what the internal clitoris is,” she said.

To request a workshop or discussion topic, students can fill out the program request form on the LivingWell website, she said.