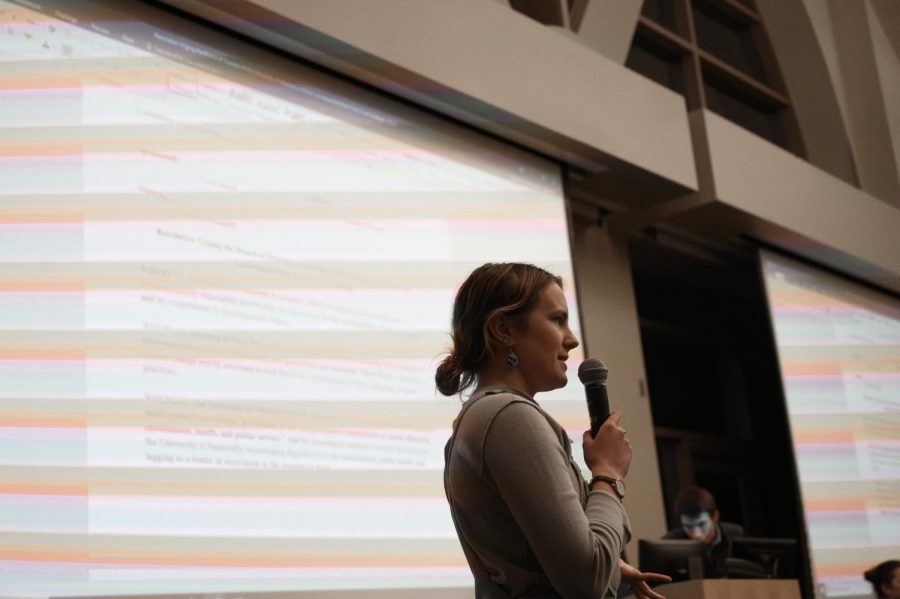 Junior Sophie Smith, chair of the Committee on the Environment, reads aloud a resolution urging the board of trustees to divest from fossil fuels at an SGA meeting, Jan. 21. Organize President Kieran Edraney, a senior, was also at the meeting.

To thundering applause and a standing ovation, SGA emphasized the importance of UVM’s divestment at their Jan. 21 meeting.

During their weekly meeting, junior Sophie Smith, chair of the Committee on the Environment, introduced a resolution urging the board of trustees to divest from fossil fuels.

“The Student Government Association recognizes that socially and environmentally responsible investments are imperative for the sustainability of the University and its commitment to environmental values,” the resolution stated.

During the meeting, Smith said that investing in  fossil fuel corporations supports practices that contribute to climate change.

Additionally, by supporting these fossil fuel companies, UVM is going against its own values of being a leader in practices like helping the environment, Smith said.

“By choosing to invest in fossil fuels, the University is financially encouraging degradation to the environment, public health and being a leader in innovation,” she said.

With the passing of the resolution Jan. 21, SGA requests the budget and finance committee of the board of trustees to conduct a divestment assessment and create an action plan for removing UVM’s holdings from fossil fuel companies.

“The resolution requests the executive committee of the UVM board of trustees craft a unique response that outlines their specific reasoning for inaction to students’ October 2019 proposal,” Smith said.

Smith detailed the long history of student action concerning the University’s divestment of fossil fuels, which started in 2008.

Additionally, SGA requested for the board of trustees to divest in 2013 and 2017.

Smith said the student group Organize, which submitted a formal proposal for UVM to divest from fossil fuels in 2019, was met with the same resistance from the board that past activists have encountered.

“They were met with the same response students received in 2016, without proper guidance or specific reasons for the response based on the proposal submitted,” she said.