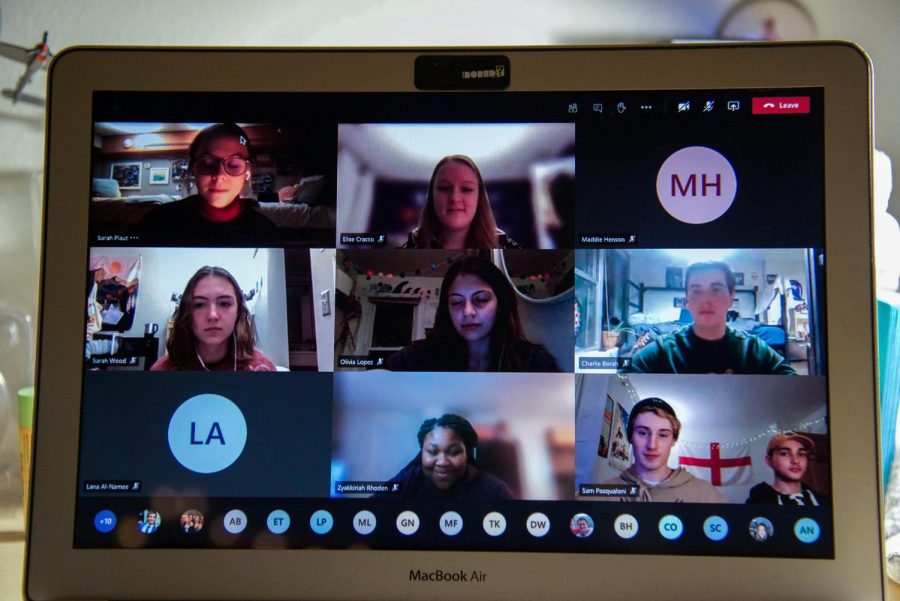 SGA meets for the first time this semester on Teams Feb. 2.

Resolutions demanding the reversal of cuts to CAS and discussing a new Davis Center flagpole policy were at the top of the agenda in the first SGA meeting of the semester.

In this Tuesday’s meeting, the senators passed a resolution addressing the termination of three professors and challenged administrators’ decision to slash programs from the College of Arts and Sciences.

Additionally, the group agreed on a new flagpole policy following heated controversy over the school’s policy in the fall.

“SGA believes you cannot properly teach ethical reasoning and decision making without a religion major that teaches the study of myths, rituals, ethical systems and formations that human beings have created in response to what they perceive to be powers beyond the human,” said Senator Charlie Borah.

Borah, a member of the Academic Affair Committee, wrote the resolution with input from other members. He said he was motivated by the outraged response from the UVM community to the cuts.

The resolution called for the reversal of the planned slashes to 12 majors and 11 minors as well as the terminations of Charles Briggs, James Williamson, and Steven Wright, Borah said.  Briggs is a professor in the history department, Williamson in the English department and Wright in the geology department.

While discussing the resolution, senators agreed the cuts would hurt more than help the University.

Senator Maddie Henson said that the CAS cuts make no logical sense and that it was important to have a well rounded education from different points of view.

“I completely understand the financial reasoning behind it, but just as a STEM major, this is incredibly wrong to do and it only can enrich our experience if we keep the classics in the humanities and especially geology,” she said.

SGA also discussed the new Flagpole policy. After a conflict between marginalized identity groups and the administration last semester over how long a special events flag could be up, control of the flagpole outside of the Davis Center shifted to SGA.

SGA Speaker Sarah Plaut said that over break herself and Senator Olivia Lopez wrote a procedure for how the Judicial Committee was going to work on the flagpole.

“Every member of the Judicial Committee will get the email whenever there is a flag request, and we are going to vote pretty much immediately whether it be in a meeting, email, text, whatever, and we decided to have a seven out of eight votes in order to fly a flag,” Plaut said.

The resolution was passed with no questions or abstentions.

Other than executive reports, the meeting ended with the swearing-in of Senior Elise Cracco to the treasurer position.