The Vermont Cynic • May 3, 2022 • https://vtcynic.com/news/sga-swears-in-new-speaker-and-treasurer/ 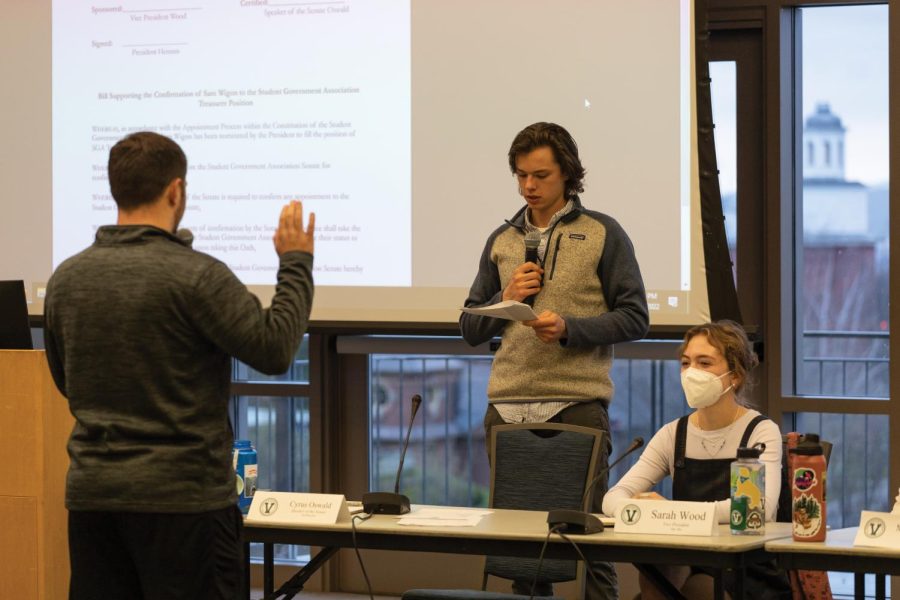 SGA swore in Treasurer Sam Wigon, a junior, and Speaker of the Senate Carter Purple, a first-year, for the 2022-23 academic year at their April 26 senate meeting.

Purple hopes to achieve personal goals such as reinstating minutes into SGA meetings as well as remain unbiased in meetings, he said. Wigon hopes to reorganize SGA’s Finance Committee to streamline club funding, he said.

The speaker’s role is to lead and moderate SGA meetings with objectivity, according to the 2020 SGA Constitution.

“[We have] a lot to look forward to this year,” Purple said. “First of all, we have a really strong Senate and a good mix of old and new senators who I can tell are really passionate about everything. So my primary goal is just to help facilitate that.”

The speaker is a very important leadership position within SGA, Purple said. They make sure all SGA business within and outside of meetings runs smoothly.

Purple hopes to reinstate the taking of minutes during SGA meetings, a practice that went on hold following the onset of the COVID-19 pandemic, he said.

He wants to improve accessibility to the outdoors for all students since not everyone at UVM is able to receive the benefits that come from living in a state like Vermont, he said. Purple hopes to bring the outdoors to a more diverse group of students.

Purple is meeting with Lina Balcom, interim director of student life, in the next few weeks to begin discussions on ways to meet those goals, he said.

In the meantime, Purple plans to meet before the end of the semester with outgoing SGA Speaker Cyrus Oswald, a senior, to discuss Oswald’s experience as speaker, Purple said.

Purple also wants to make it easier to schedule an appearance at public forum and reach out to clubs to encourage participation, he said.

Public forum is a section of SGA meetings where the public is able to address the Senate, in order for students to advocate for the changes they hope to see at the University, he said.

“We want you to come tell us your issues,” Purple said. “Tell us what’s pressing, tell us what you want us to do. That’s something we can do.”

The treasurer’s role is to supervise SGA’s financial affairs, such as its structure, planning and operations, according to the 2020 SGA Constitution.

Wigon has plans to reorganize the way UVM clubs and the Senate’s finance committee communicate, he said. He hopes to streamline the process through various trainings on finance and communication for ClubSigners and better communication.

“With COVID and a lack of staff, everything fell through and the situation of spending for some clubs was closed just because they didn’t do the trainings and then were falling behind,” Wigon said. “I’m hoping to avoid that.”

The finance department has since hired new staff and has committees searching for a new club sports director to facilitate the clearest approach to spending for clubs possible, Wigon said.

Wigon looks forward to working in the SGA Galaxy Space and being available for ClubSigners, he said. He encourages anyone with finance questions to stop by the office and speak to him.

“It should be easy for me to be in there for the 20 to 30 hours [per week] they need me,” Wigon said. “I’m going to be available by email for people to schedule time with me. I’m hoping to set up scheduled office hours somehow.”

Wigon wants to maintain consistency in his role and with clubs in regards to supplemental funding, which will now be run through him and the finance committee instead of the chair of the Finance Committee, he said.