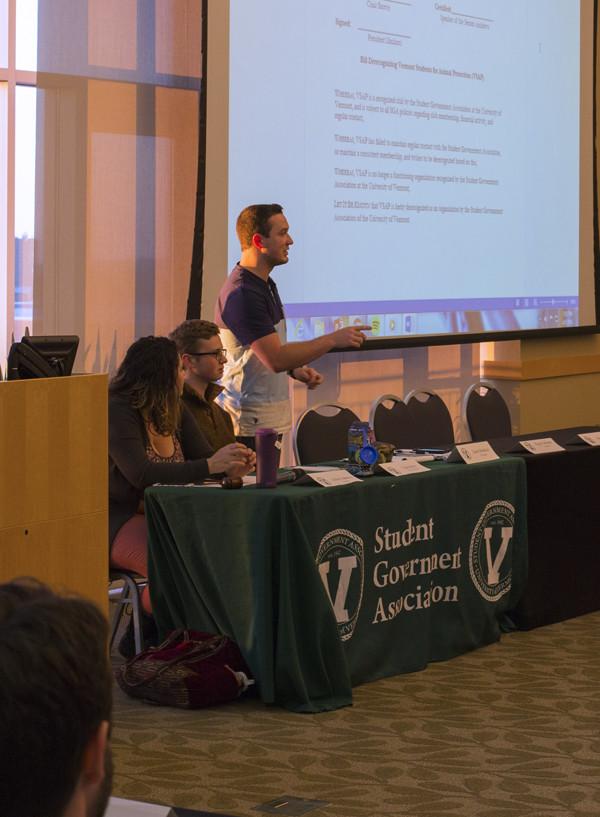 SGA President Jason Maulucci addresses the attendees of the SGA meeting April 5, 2016. SGA is planning to be carbon neutral by 2025.

SGA is looking to greatly minimize UVM’s impact on the environment by 2025.

In 2010, UVM committed to being carbon neutral by 2025 as part of a nationwide effort by universities across the country.

“I decided because of that to launch a study to look into how SGA could be carbon neutral by 2025,” SGA President Jason Maulucci said.

The SGA committee on the environment is currently tracking the carbon footprints of clubs on campus and looking at ways to bring their impact down to zero, Maulucci said.

“I think it has been going well, and the committee is well on its way,” Maulucci said. “I think it’s an important goal for the student body.”

Based on what the committee has found so far, being carbon neutral will not raise costs for student organizations or the student body, he said.

SGA is looking into several options on how to decrease its carbon footprint, he said.

Sophomore Will Corcoran, chair of the committee, is leading the effort with several other SGA officers.

They are working with Native Energy, a Vermont business that helps individuals and businesses reduce or offset their carbon footprints, Corcoran said.

“Club sports have actually been travel carbon neutral for the past year,” he said. “So we’re trying to build off of that and take it to all of SGA.”

The committee has been meeting regularly with an agent from Native Energy to figure out how SGA can cut emissions, he said.

“They are being extremely helpful in guiding us along this whole path,” Corcoran said. “There are four areas that we are focusing on: travel, heating, waste and shipping.”

Travel produces the most carbon emissions so the committee is tackling it first, he said. They have already tracked all car travel for all clubs and are looking into air travel.

“The difficulty is that it’s hard to track all of our clubs and organizations,” Corcoran said. “For example, the Beekeeping Club meets in different locations around campus. We are focusing on clubs that have a designated spot, like Ski and Snowboard.”

Once the committee has this data, they will pick a project from Native Energy that offsets the amount of carbon they find, such as a reforestation project, he said.

“It’s crazy complicated and it’s a huge task, but my committee is working really hard. I have four people that are all working diligently,” Corcoran said.

The team is looking at data from fiscal year 2016 and should know how much carbon they need to offset by the end of April, he said.

Professor Jon Erickson of the Rubenstein School of Environment and Natural Resources said he supports this effort by SGA.

“SGA’s initiative really plays into a larger goal by the University’s initiative,” Erickson said. “Our Office of Sustainability currently oversees our climate action plan which is one of the most aggressive plans in the country.”

Right now UVM works with Burlington Electric to make sure its electricity emissions are net zero, he said. That means the carbon generated from electricity used is mitigated to equal zero.

SGA has the opportunity to lead this effort and focus on how students and clubs travel, Erickson said.