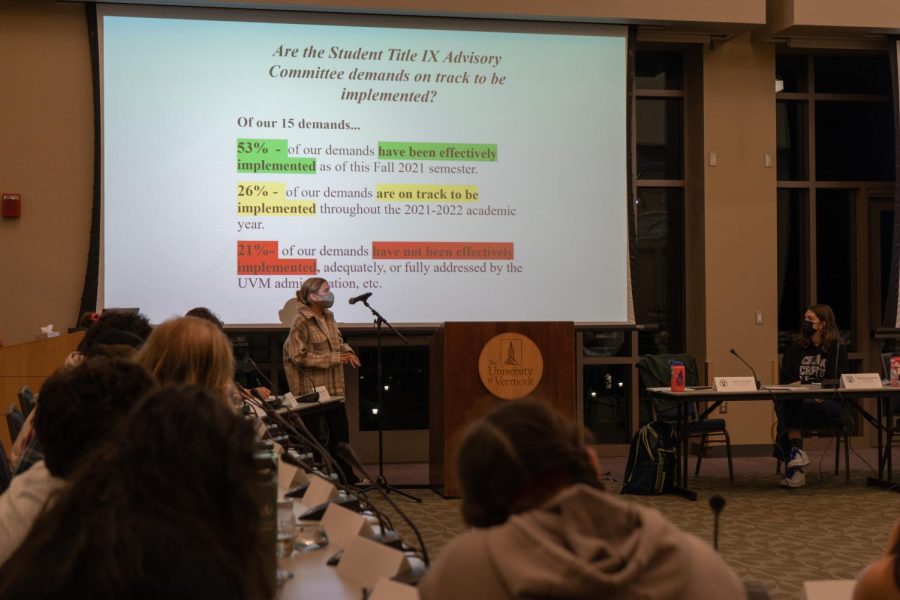 Shelley said 53% of the demands to which administration has agreed are fully implemented and 26% are on track to be adequately implemented.

These measures responded to the movement against sexual violence that erupted on campus last spring. Administration agreed to all 15 demands outlined by the Title IX Advisory Committee, according to UVM’s webpage responding to the student demands.

Among the demands that have not been addressed includes an independent investigation into the Title IX office, Shelley said.

“People don’t feel that if they report their sexual misconduct case to this office that it will be fairly investigated,” Shelley said. “We really need there to be trust in the Title IX office, so we asked for an independent investigation of that office.”

Instead, Shelley said the administration hired Grand River Solutions to conduct an independent review of the office, with a public summary of the review.

Grand River Solutions provides services that deal with issues relating to diversity and equality, according to their website. Their website states that they are committed to lowering the resource-intensive and monetary expenses of equity management and compliance.

“It’s my feeling, as well as some folks on my committee, that we wish the University would have chosen a more survivor-centered organization, [such as] an organization like RAINN, which is Rape Abuse Incest National Network, to conduct a review of the Title IX office,” Shelley said.

UVM successfully fulfilled their promise to hire three to four new campus victims advocates in addition to the one they had previously, Shelley said.

Additionally, she said the school fulfilled promises such as partnering with HOPE Works Vermont to provide 24/7 crisis counseling and advocacy to survivors on campus, continuing to fund the LiveSafe app, and creating a Prevention Education Director position.

The Affirmative Action Equal Opportunity Office also went through all reports from Explain the Asterix. The organization, founded by UVM alumni, gathered anonymous reports from survivors last spring, Shelley said to the SGA.

All campus police officers, RAs and Counseling and Psychiatry Services counselors trained on how to assist survivors, Shelley said. None were required to do so previously.

Seventy percent of the members of each fraternity and sorority must attend sexual assault education programming, Shelley said. Prior to the demands, the attendance rule had only existed for sororities.

Requiring all SGA members and all SGA-sanctioned clubs to attend semesterly sexual violence and education training is a demand on track to be met, Shelley said.

However, the initial training was postponed, according to an Oct. 4 email from Ann Wong, chair of the club affairs committee.

“I regret to inform you that due to circumstances outside of Club Affairs’ control, we are going to have to reschedule the sexual assault training to a different date,” the email stated. “We are expecting it to be rescheduled to some time in mid-November before Thanksgiving Recess.”

A group of students and faculty have also formed the Title IX Internship Committee, which is currently working to create an undergraduate internship program at UVM, to comply with another demand.

Committee member and junior Maddie Henson said they are looking to hire an internship coordinator by next summer.

After that, they are planning to hold a semester-long course and evaluate potential interns for approval during fall 2022, with the first batch of peer educators beginning the internship program by spring 2023.