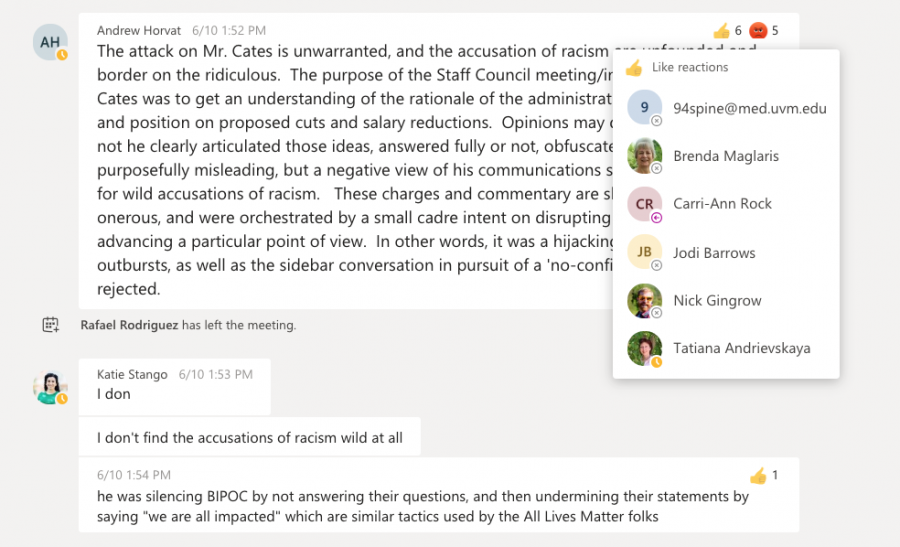 Staff Council issued an apology email to Suresh Garimella after some staff members voiced accusations of racial insensitivity that occurred in the monthly Staff Council meeting.

The other recipients of the email include Provost and Senior Vice President Patricia Prelock and Vice President for Finance and Treasurer Richard Cate, who was accused of making racist comments earlier this week.

The email began with a frank statement of the Staff Council’s own serious failings at the meeting.

“We the Officers of Staff Council, and the staff of the Staff Council office, failed to adequately amplify questions presented by several Black, Indigenous, and People of Color (BIPOC) staff members attending the meeting. This caused serious harm,” stated the email.

This email was sent to Garimella two days after senior media technician Andrew Horvat sent messages that Ana-Cristina Medal, a career counselor at the career center, stated are “incredulous”.

Horvat sent a 142 word long message defending Cate for his comments in the June 9 Staff Council meeting, stating that while Cate was not well articulated, he was not being racist and a vote of no confidence would be uncalled for.

“These charges and commentary are slanderous and onerous, and were orchestrated by a small cadre intent on disrupting the conversation and advancing a particular point of view,” stated Horvat.

Horvat stated he believes the attack on Mr. Cate is unwarranted, and the accusations of racism are unfounded and border on the ridiculous.

“It was a hijacking of sorts,” Horvat stated, referring to Sandra Bermanzohn’s call to attention to the questions about racial issues that were being ignored. “These outbursts, as well as a no confidence vote, ought to be rejected.”

Tatiana Andrievskaya, an office support generalist for the Center of Academic Success, was the Staff Council member who “liked” Horvat’s message. Andrievskaya is a member of the Personal and Professional Development committee.

The committee shall be responsible for monitoring and reviewing all matters that deal with personal and professional development of non-represented staff as they relate to conditions of employment, according to the Staff Council website.

Individual members of this committee share the responsibilities of creating agendas, facilitating meetings and attending Executive Board meetings in the 2019-2020 academic year, the site states.

Shirley Pine, a member of the Staff Council Executive Board, sent a message in agreement with Horvat. “Thank you, Andrew Horvat. Well stated,” she responded in the chat.

Pine’s message was sent on June 10 and has since been deleted.

Neither Horvat nor Pine responded to the Cynic’s requests for an interview.

Pine’s voice was also heard in the Jun 9 Staff Council meeting where she interrupted the search of a question regarding racial justice which has been asked by Bermanzohn.

“You have not a small group of staff saying, this is racist, this harms us, you aren’t listening, you are avoiding our concerns…and you [Horvat] and Shirley state that these attitudes and accusations are ridiculous and disruptive…a hijacking. I’m so sad.”

The messages from Horvat and Shirley erode his entire belief that staff council serves as the voice for all staff, Evans stated.

However, after the email was sent out, Evans said he had a different perspective.

“I am really appreciating the gesture from Staff Council because it surprised me and a lot of other people in its thoroughness and its humility, and even the speed in which they wrote that and sent it out,” he said in a June 14 interview.

Staff still have not heard anything from the administration regarding what they experienced during the Staff Council meeting with Richard Cate, Evans said.

Though simply replacing Cate is not productive to fixing the problem of racial inequity at UVM, Evans said.

“What would make me more satisfied than anything would be to have relationships and conversations with those white folks who made those comments and actually participate in their learning and growth,” Evans said.

Though it’s tempting to make enemies out of others, simply condemning people is unproductive in the long run, Evans said.“You’d have to replace a lot more people then you probably can even imagine,” he said.

Eleven people left the meeting after this message was sent. Among those 11 people were Stephanie Loscalzo and Lacey Ure, both members of the Staff Council and also part of the Personal and Professional Development committee.

Director of Student Life Daphne Wells responded to Horvat’s message, stating that some of her fellow staff members are still choosing to ignore the problems at hand, even after everything that is going on in the world.

“Andrew Horvat, your disrespectful, off base, and vile comment is the reason the Black and Brown people have to show up and do the extra labor spoken about yesterday and educate you on basic race relations and human decency,” stated Wells.

The dismissiveness of Black and Brown people is an epidemic at UVM, and many staff are showing their true colors in this Teams chat, Wells stated.

“I will never show up to a Staff Council meeting ever again. Andrew Horvat, you owe some people on this thread some money for the time they spent educating your disrespectful ass,” stated Wells.

Wells declined to comment on the message she sent to Horvat.

In a statement issued to the Cynic, Lunna wrote, “We are listening carefully to what our campus colleagues are voicing. As members of the UVM community, and as a leadership group, we too are seeking a path forward that results in a strong university.”

Lunna states a strong university is one that can address racism, value voices from a variety of perspectives and positional authority, and truly live Our Common Ground values for all.

Staff Council said they have begun re-evaluating and re-imagining the structure and process of it’s meetings going forward. They plan to educate themselves about their participation in systematic racism at UVM in an ongoing fashion.

Not one member from the Teams chat of 220 people reacted to this message as of June 14.