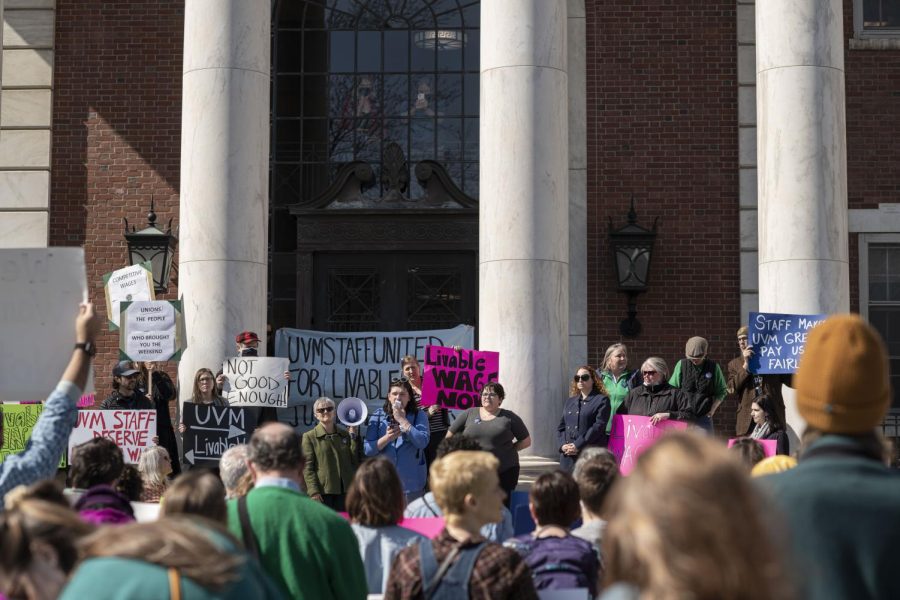 Chrysanthemum Harrell ‘22 speaks in front of the crowd March 16. She stands among members of Staff United holding signs expressing activism.

Editor’s note: This story was updated March 23 at 10:00 a.m. to correct base pay errors and cut outdated numbers of union representation.

UVM Staff United protested on March 17 in hopes of negotiating a contract they feel is fair from the administration that includes livable wages and improved working conditions, said Ellen Kaye, a cataloger at the Howe Library and co-lead negotiator of the union.

UVM Staff United brought a proposal to administration containing a guaranteed livable wage for all staff workers and ample annual wage increases for the staff in December, and received an answer March 16, Kaye said.

“They answered our proposal, and it does not give us what we deserve, and so that is why we are having a rally because we want them to understand that we are willing to stand up for this,” Kaye said.

Kaye said staff may not have the ability to provide the level of service that they have traditionally provided for students and for UVM, given their current treatment.

“We are understaffed, underpaid, and our ability to support students can be suffering,” Kaye said.

The protest took place at noon in front of the Waterman Building and lasted for an hour. Kaye and several other members of UVM Staff United gave speeches and rallied at Waterman with posters and chants to convey their message.

A group of staff led an initiative to unionize in fall 2019, Kaye stated in a March 18 email. This is the first time UVM non-custodial and non-maintenance staff have unionized, Kaye said.

Before the staff unionized, they lacked representation, rights and a collective contract, Kaye said.

“You are basically an ‘at will employee,’ which means you could be fired any time for any reason,” Kaye said. “That’s what we’re working on with the administration. We have been meeting with them since September, to iron out the details of a contract, an agreement between administration and staff about our wages and working conditions.”

In fall 2021, the union started to work to negotiate a contract with the administration regarding their wages and working conditions, Kaye said.

The most recent UVM list of base pay was last updated online in November 2020. Base Pay is the initial salary paid to an employee prior to benefits, and raises, Investopedia’s website stated.

Robbie Grant, an audiovisual technician in classroom technology services, said he was unable to afford to pay his own heating bills this winter.

“We are the staff, as opposed to the faculty, and we get paid a yearly wage or an hourly wage,” Kaye  said. “By and large, most staff make less than most faculty.”

The union wants the equivalent of a liveable wage for Chittenden County, Kaye said. For $20 an hour, many staff said they can’t afford to live in this county without a second job.

Five hundred of the 1,350 union members do not make a liveable wage and 30% are food insecure, Wallace-Brodeur said.

A liveable wage differs depending on where an individual lives – it’s a wage that allows a worker to meet their basic needs, according to a June 5, 2019 New York Times article. Minimum wages typically coincide with federal poverty guidelines.

The majority of the staff work close to 40 hours a week and work a second job, Kaye said.

“I’ve been running out of money before each paycheck and when I checked my bank account, all I spent my money on was food and gas, and that’s it,” Grant said.

Some staff’s families have been put into so much debt, it’s impossible for them to see them getting out of it while others depend on their families with food assistance, Kaye said in a rally speech.

“I’m hoping that the administration takes us a little bit more seriously and understands the impact that they’re having on us, with not paying folks fair wages,” said Alex Hazzard, a student services adviser for the Mosaic Center for Students of Color.

Many staff members are food insecure and have second or third jobs to make ends meet, said Rachel Wallace-Brodeur, a project director in the department of pediatrics at the Larner College of Medicine in a rally speech.

“[UVM] can start by valuing their workers, the staff that make this place a kinder and more compassionate place,” Wallace-Brodeur said. “Make it a healthy place to work, and an easier place for us to serve students.”

UVM Staff United launched a petition asking President Garimella for liveable wages, justice, equity and accountability, Kaye stated in a March 20 email. The union plans to meet again soon to decide their next steps for the next bargaining session on April 1.

Both administration and the UVMSU agreed to keep the rules of negotiation private, so the administration has chosen not to comment further on claims made by staff members about their financial circumstances at this time, according to the email.

“We continue to negotiate in good faith with UVMSU,” Corredera stated in a March 18 email.