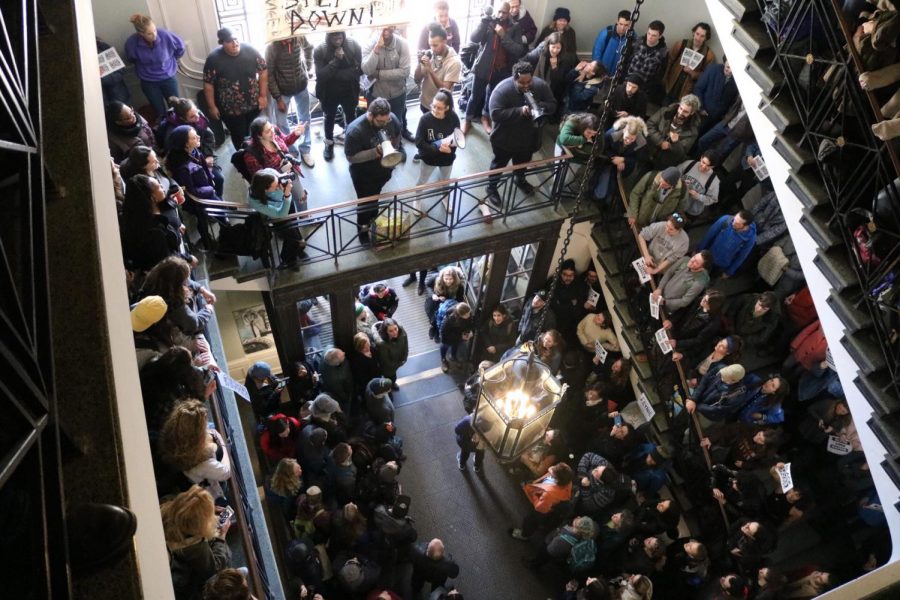 Update 3:21 p.m. NoNames for Justice requested sleeping bags on Facebook, saying “we’re staying at Waterman,” and telling people to stay if they are in the building.

The third-ever Waterman takeover began at the University of Vermont at 1 p.m. Feb. 26.

More than 250 protesters from student racial justice group NoNames for Justice have taken control of the Waterman building, attempting to clear all classes from the building.

UVM Police Services said that that they were not aware of any classes being cleared from the building after investigating a tip about it.

If students see anything [about classes being cleared from the building] they should call police services, they said.

The crowd chanted: “We’re taking over,” and “shut it down.”

The takeover began in preparations for negotiations with President Tom Sullivan at 5 p.m. today, Edosomwan said.

Arts and Sciences Dean Bill Falls signed his support on behalf of CAS this morning at 8 a.m.

Leaders have put out a call for food and water via the NoNames Facebook page.

The Waterman building houses administrative offices, including President Tom Sullivan’s office. The takeover will last until administrators and protesters reach an agreement on a list of protesters’ demands, McCarron said.

NoNames leaders led a planning session last night to discuss how they would occupy the building and organize students. The group publicized their planning session on their Facebook page, and warned media personnel not to attend. McCarron said the group’s highly publicized walkout, scheduled for noon today, was a cover-up of the real Waterman takeover plan.

SGA President Chris Petrillo said he was aware of the planning meeting, but didn’t attend.

Petrillo, who was unaware of the plan to takeover Waterman, said he was planning to monitor today’s walkout via Facebook live stream on NoNames’ Facebook page.

UVM community organizer and former student Valentine Kulsic has been in charge of developing “propaganda” for the NoNames protesters in preparation for the takeover, Kulsic said.

“I was unaware that I was on the record when I made the joke about propaganda, and when I made said joke I clarified immediately that I was referring to chants and slogans,” Kulsic said in a comment on this article Feb. 26, and added to have only worked on the campaign for “2.5 hours of my time.”

This demonstration follows a week-long hunger strike from John Mejia, assistant director of off-campus relations, a student-run rally in solidarity with Mejia Feb. 20, a protest at the cross-section of Main Street and S. Prospect Street Feb. 22 and a demonstration in the Waterman building outside of Sullivan’s office Feb. 23.

It also follows two previous “Waterman takeovers” in 1989 and 1991 and a 1996 student hunger strike, all in the name increasing diversity and inclusion among students and faculty on campus.

In the 1988 takeover, students occupied the Waterman building for five days, demanding more effort to bring students of color to campus. As a result, then-President Lattie Coor signed the “Waterman Agreement” April 23, 1988.

The agreement demanded the University hire between four and 11 tenure-track faculty members before 1992, double the number of undergraduate students of color, development diversity classes, increase administrative representation for students of color, evaluate faculty accused of racist remarks and punish University employees who made racist remarks.

In 1992, then-President George Davis decided to annul the Waterman agreement. In response, 22 students took over the president’s office for 20 days, demanding greater multicultural awareness and representation in students and faculty, according to Cynic archives.

On day 20, eight students were take by a police bus. Davis declined to negotiate, and said there was an “atmosphere of coercion,” according to Cynic archives.

Students built a tent city on Waterman green they called Diversity University, which was meant provide an education on social and racial justice issues they said the University wasn’t providing.

In 1996, in response to three death threats on women of color at UVM, Maneshkona-Shontae Praileau ‘96, a Mohegan-African-American student, went on a 64-day hunger strike, according to Cynic archives.

“as a result of student Maneshkona-Shontae Praileau’s hunger strike, a national movement begins and calls for students nationwide to join together. Support for Shontae comes from around the world once word gets out over the internet,” according to the University “Our History of Diversity” timeline.

A previous version of this article stated that students acting as “secret service” were preventing people from entering and leaving executive offices. This is untrue. NoNames leaders and administrators are currently in private talks within executive offices. No students are patrolling.