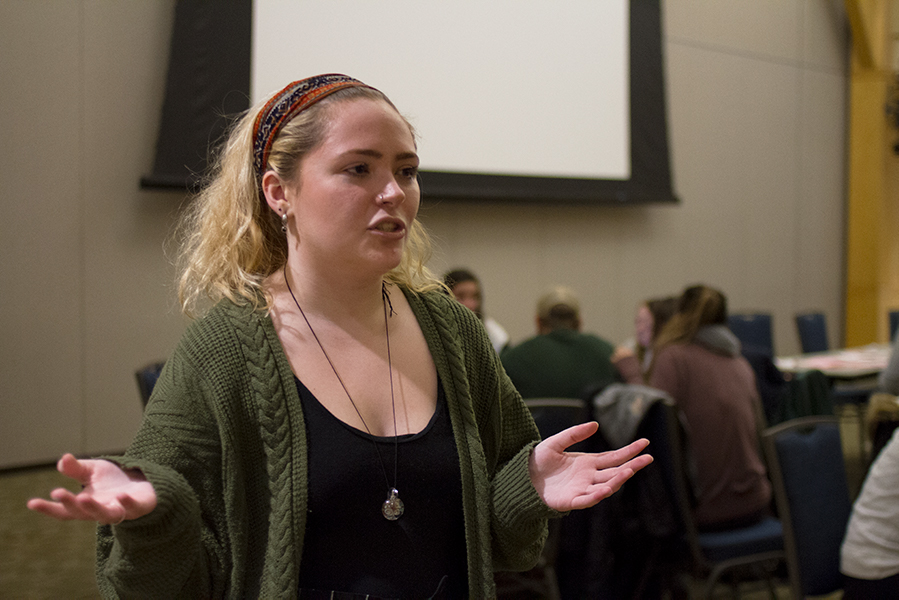 Sophomore Syd Ovitt speaks Dec. 9 at an Explain the Asterisk event. The movement gained suport from Philip Barith, a UVM English professor and the chair of the Vermont Senate Education Committee, who said that he will be proposing policy in January.

Legislation that would force UVM and other universities to disclose if a student was dismissed for sexual misconduct will soon be proposed in the Vermont Statehouse.

Philip Baruth, a UVM English professor and the chair of the Vermont Senate Education Committee, said that he will be championing that legislation in January 2019.

Baruth will work with sophomore Syd Ovitt, who started a nationwide campaign that would force colleges to indicate if a student was dismissed for sexual misconduct, he said.

Ovitt said that she is excited to work with Baruth to draft the legislation that she has been working toward in her campaign.

“I think it’s incredible when you finally get to see something you’ve poured your heart and soul into accepted into action,” Ovitt said. “I’m grateful for everyone that has helped me along the way, and I’m ready to get to work.”

Baruth said that he first heard about Ovitt’s campaign in a debate with other legislators in November.

The number of sexual assaults on UVM’s campus struck him, because it reflects a larger, nationwide problem, he said.

Baruth will be working with other legislators to create a bill that addresses concerns over student privacy and federal privacy laws, while making sure those found responsible don’t get to transfer to another university  just to assault again, he said.

Baruth said that he expects the bill will have support and is a good first step toward addressing campus sexual assault across the country.

Ovitt started a petition in March after she reported her sexual assault to UVM to make sure what happened to her wouldn’t happen to anyone else, she said.

In June 2018, the man Ovitt said raped her was found not responsible by Title IX investigators, she said.

Since March, Ovitt’s petition has received 49,732 signatures and support from other Vermont legislators such as Rep. Peter Welch.

“What Sydney’s talking about really makes sense,” Welch said. “I so appreciated her advocacy … and her acting so energetically to keep people from future harm.”

In a Dec. 6 Facebook post, Welch stated that he will be introducing federal legislation with Californian Rep. Jackie Speier in the new Congress.

Currently UVM does not have a practice that indicates if a student has been dismissed for sexual misconduct, UVM Communications Director Enrique Corredera said.

The University does indicate on transcripts if a student is dismissed for academic dishonesty or academic performance, according to the Code of Academic Integrity.