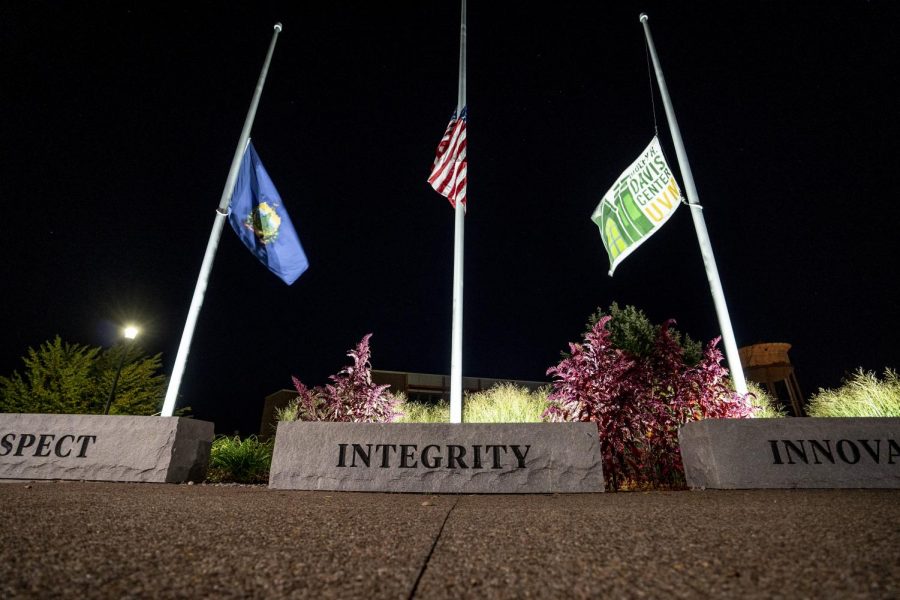 A flag with the image of the Davis Center flies from the flag pole where the Hispanic Heritage Month flag once flew. The flag was ordered down after five days due to a University policy limiting event flags to be raised on the pole for only five days.

Two thirds of Davis Center student employees have gone on strike after the University took down the National Hispanic Heritage Month flag despite student requests to keep it up.

Gary Derr, vice president of operations and public safety, removed the flag from outside the Davis Center Sept. 25 and replaced it with the Davis Center flag, citing the University’s recently changed flag policy which now limits special events flags to five business days.

In response, 32 students are striking.

“I think the message is very clear that we as the BIPOC population of the staff, as well as our white allies, who are also striking with us, we’re serious,” said UVM Junior Adrian Pastor, president of Alianza Latinx. “We’re done being made to feel small, unseen and pushed to the side.”

Allen Josey, director of UVM Event Services and the Davis Center said in response to the loss of employees, the building is reducing its hours and staff are adjusting their schedules.

“In a nutshell, we cannot operate without our students,” he said. “They are the engine that makes this building work and are the most valuable part of this office.”

Pastor said the flag has flown outside of the Davis Center for all of Hispanic Heritage Month for the past three years.

But this year, despite students’ requests for the flag to stay up longer than the new five-day policy allows, the group of advocates were told Friday afternoon the flag was coming down.

“It is important that we remain consistent in the time that flags are permitted to be flown at the Davis Center,” Derr stated in a Sept 25. email. “I hope you will find other meaningful ways to celebrate and mark Hispanic Heritage Month.”

Zyakkiriah Rhoden, chair of the SGA Finance Committee and Treasurer of the Black Student Union, quickly helped organize the strike along with other Pastor and other students in Alianza Latinx and SGA.

“I made the decision to fly the Black Lives Matter flag in June after the George Floyd unrest,” Wells said during the meeting. “And shortly after that, I received emails saying that not only had the policy been changed and revised… that the flagpole would be moved under Gary Derr.”

The students that raised the flag, UVM Student-Athletes of Color Affinity Group, responded on social media with a statement.

“Today, the University plans on removing the flag because it violates their policy, which proves that the University is continuing to perpetuate a harmful notion of false equivalency on campus and throughout society,” it stated.

The statement also said the removal disregards the values of the Black Lives Matter movement and wrongfully identifies it as a political trend.

In the days before the Black Lives Matter and Hispanic Heritage flags were removed, SGA unanimously passed a resolution Sept. 22, calling on the administration to allow identity groups’ flags to stay up for longer than five business days and to give Wells control of Davis Center special events flag again.

In a Sept. 26 statement on behalf of Derr, UVM Spokesperson Enrique Corederra said the University joins in celebrating Hispanic Heritage Month despite the removal of the flag 25 days before the annual event concludes.

“While the University supports the right of members of our community to express their points of view, it expects employees to fulfill all of the terms and conditions of their employment,” the statement reads.

On Sept. 28, UVM’s Student Government Association posted a statement on Instagram, calling for urgent action and providing a timeline on the incident from their end.

“It is clear the removal of student flown flags across campus is a trend, not just a one-off instance,” the post stated. “We at the UVM SGA urge students to use their voice and make some noise.”

The post directed viewers to an email template, which SGA encouraged be sent to administrators such as President Suresh Garimella and Provost Patty Prelock.

Rhoden said they plan to strike at least until the end of Hispanic Heritage Month Oct. 15.

“Hopefully between this time, Gary will come to his senses when the Davis Center cannot run without us,” she said.