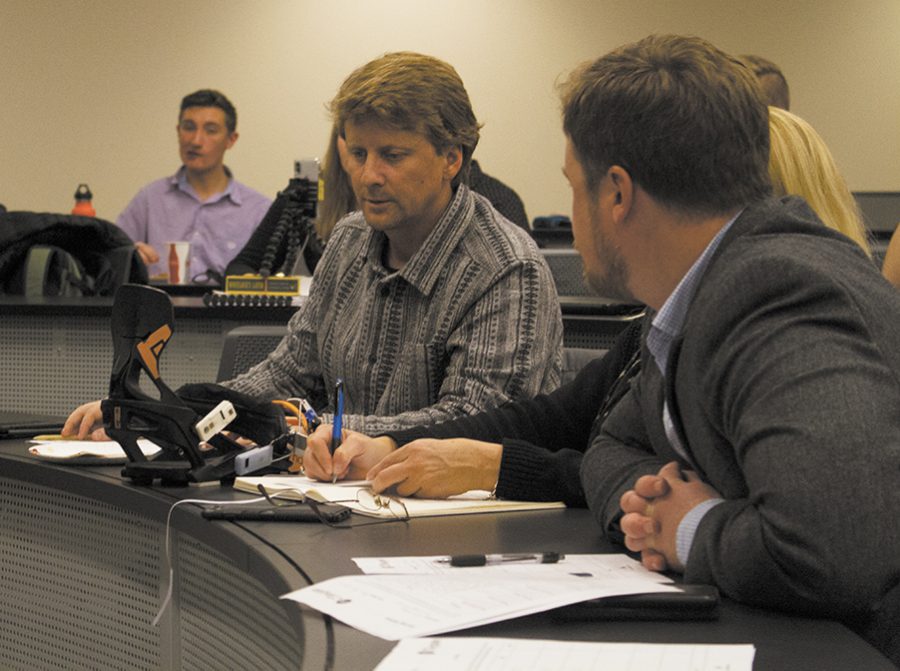 Nick Grimely, co-founder of LaunchVT, consults his other judges during LaunchVT Collegiate pitch competition. Senior Max Muller and junior Grayson Glosser won with their businesses' redesign of the hospital gown, which they called the Recovery Robe.

Four teams of UVM students competed Nov. 13 for the chance to win money to help fund their businesses.

Senior Max Muller and junior Grayson Glosser won with their business’ redesign of the hospital gown, which they called the Recovery Robe.

Their team designed the gown after they heard complaints about current hospital gowns from patients and caregivers, which included having to remove IVs in order to change the gown and removing the entire gown when doing examinations, Muller said.

“It’s not dignified,” he said. “You’re exposed. Your butt’s flapping in the breeze.”

The UVM Entrepreneurship Club held its qualifying competition to pick UVM’s representative to LaunchVT Collegiate — the winner of which would go on to compete in the final LaunchVT competition.

LaunchVT is a statewide business pitch competition which Vermont entrepreneurs enter for the chance to receive financial support for their business, Entrepreneurship Club President Cole Green, a junior, said.

Muller and Gossler are members of Design for America, a national organization that encourages students to find creative solutions to common problems, Muller said.

Their team has been entering pitch competitions like LaunchVT as a way to fund the Recovery Robes project and make a usable model, Gossler said.

The other pitched businesses covered a variety of products and services, from a device that charges small electronics  to a company that specializes in identifying and removing invasive plant species.

LaunchVT Collegiate was created to make it easier for college students to enter the competition and is only open to representatives chosen by colleges and universities in Vermont, Green said.

“Students are largely unsuccessful in competing against adults, so LaunchVT Collegiate is a vehicle for which college students can compete with these seasoned professionals,” he said.

LaunchVT Collegiate doesn’t happen until February, but the November qualifying competition was intended to give the winning team the opportunity to perfect and prepare their pitch for the collegiate round, Green said.

Pitch competitions like LaunchVT are perfect for students, because it allows them to come up with business ideas and practice making pitches, said LaunchVT co-founder Nick Grimley, a competition judge.

Grimley is the director of entrepreneurship and tech commercialization for the Vermont Agency of Commerce and Community Development.

One of the purposes of LaunchVT is to find a way to encourage people to start businesses in Vermont and combat the number of people moving out of the state, Grimley said.

“Growing up in Vermont, I saw a lot of young folk leave the state to find opportunities elsewhere,” he said. “If we had more businesses [in Vermont], maybe we’d have more people staying in the state.”

Vermont’s population has been decreasing at a rate of 0.3 percent a year since 2010 — roughly 2,000 people per year, according to the U.S. Census.

The national population has grown by 5.3 percent, according to the Census.