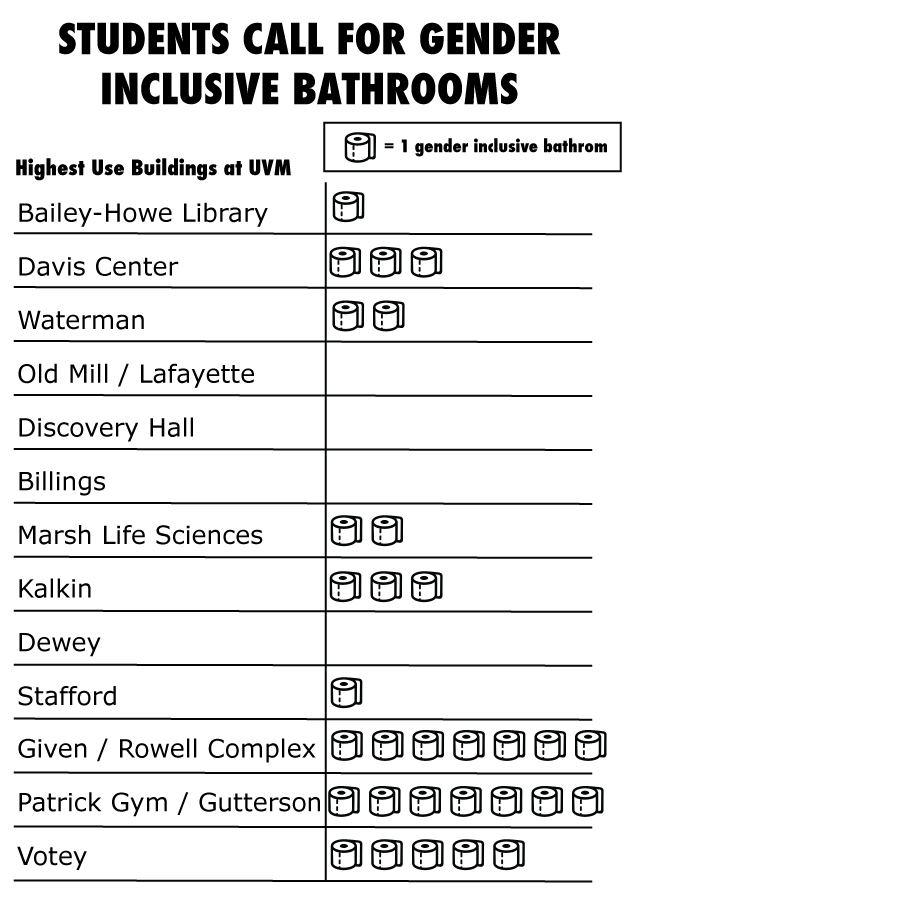 Everybody uses the restroom, but at UVM there’s not a restroom for every student.

Students are calling for greater access to gender-neutral restrooms across campus. There are 1,473 restrooms in UVM-owned buildings, 253 of which are gender-neutral, according to UVM’s 2016 Lavatory Inventory.

Access to these restrooms is a huge concern for students who use them, said Becky Swem, education and outreach professional of the LGBTQA Center.

“One issue is a safety issue,” Swem said. “There are transgender students who might not drink water because they are concerned about using the bathroom on campus, and that can cause health issues.”

Trans students who use gender-neutral bathrooms may have to travel out of buildings or across campus just to use a restroom, she said.

“Another issue is they can’t use the bathroom because they are worried about how that will be received if they will be harassed for choosing the bathroom that they want to use,” Swem said.

The LGBTQA Center is focusing to create spaces for everyone to use and feel comfortable in, she said.

UVM created the Gender-Inclusive Restroom Task Force Report August 17, 2016, which studied access to restrooms on campus for LGBTQA students and made recommendations to address these issues.

The report suggested creating gender-inclusive restrooms in high-traffic buildings such as the Davis Center and Bailey/Howe library.

Junior Z McCarron, petitioned students for the increase of more bathrooms in the Bailey/Howe library April 22,  2016, they said.

“[The petition] ended up escalating to the point where we were sitting in the dean of libraries’ office refusing to leave during finals week,” McCarron said.

Upon learning of the sit-in, President Tom Sullivan called a meeting with leaders on campus to discuss the issue and created the GIRT report as a result, McCarron said.

“The GIRT report is suggestions—It’s not policy or a committee with power to change these issues,” MacCarron said. “We found there were a bunch of timelines set in the report that were not even close to being met.”

Since then, McCarron has been continuing to organize students to implement the suggestions found in the report.

“We now are actually working through all of those things,” McCarron said. “We’ve identified specific high-use areas and a lot of them don’t have gender-inclusive restrooms.”

On the LGBTQA Center’s website is a Google map of all gender inclusive restrooms on campus. Old Mill, Lafayette, Billings, and Dewey Halls do not have gender-inclusive bathrooms, according to the map.

The Christie-Wright-Patterson complex has only two gender-neutral restrooms, according to the map.

McCarron is hopeful UVM will increase these numbers in the long-term.