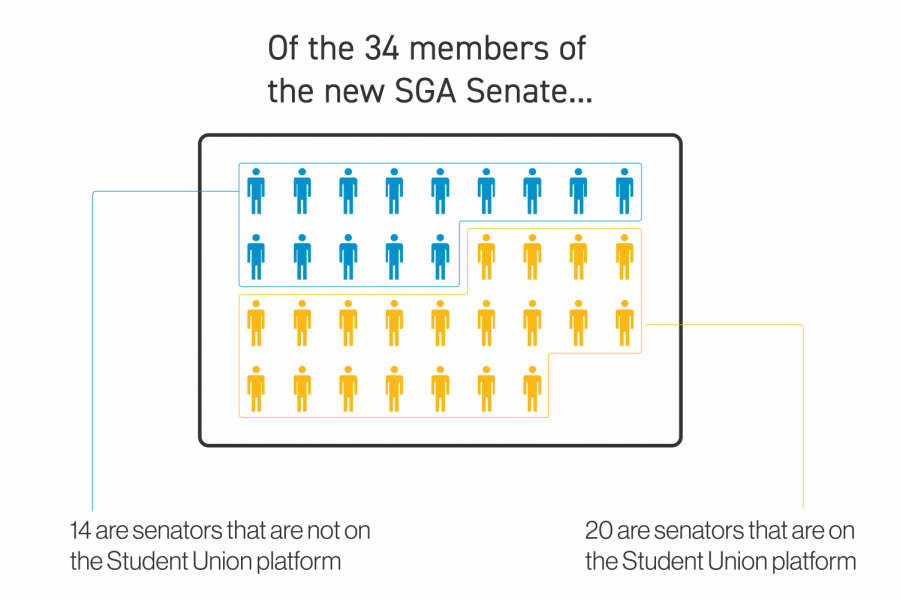 34 UVM students were elected to serve on SGA for the 2020-2021 academic year Thursday, April 9. The majority of students elected ran on a platform that supports the creation of student union. Of the 34 SGA senators elected 19 are new to the organization while 15 will keep their seats.

Following the election of an SGA President who ran on a platform to create a student union, 20 SGA senators that ran on the same platform were elected Thursday night.

Junior Ben Bieri, the SGA president-elect won the presidential race on a platform to get rid of SGA. Now, his supporters hold a majority inside the senate.

According to the results, all 20 candidates that ran on the UVM Union of Students platform were elected, as well as 19 first-time senators and 15 incumbents.

The results, which were announced in an email sent out late Thursday night, listed out the 34 senators that are to make up SGA during the 2020-2021 school year, as well as more information on the numbers of the presidential election.

Senior Nick Bouffard, chair of the SGA Elections Committee, highlighted the involvement of the UVM student body in both the Senate and the presidential elections, despite not physically being on campus.

“We had two student-body-wide elections gathering thousands of votes from students like yourself,” he said, “The two presidential debates alone amassed more than five days worth of collective watch time.”

The email listed the individual numbers for both the presidential and senate races and the winners of each.

According to an Instagram post by the Union, they are a “democratic collective of students, dedicated to the end goal of establishing a formal student union at the University of Vermont.”

Many of the candidates share the goals of pushing UVM to divest from fossil fuels, increasing student representation and diversity within SGA and more funding for CAPS for increased mental health care across campus.

These students range from first-time senators to incumbents.

The senators that ran on the Union platform make up the largest percentage of senators elected to SGA, approximately 37%.

Most of the members of the Union are new members to the senate, with only 30% of the Union being incumbents.
More New Faces
More first-time members were elected to SGA than incumbents were reelected.

According to the results only 27.8% of those elected to SGA were incumbents who did not belong to the Union, the smallest percentage of students.

However, most incumbents did not belong to the Union, with only 40% of the incumbents who were elected running with the group.
Less Members
The number of seats reserved for first-years to be elected in the fall has increased, leading to a smaller number of senators being voted in now during the spring, Bouffard said.

“In the past, five seats have been reserved for incoming first-year students,” Bouffard said in a text message. “This spring we changed it to eight seats reserved.”

This means that in the fall semester with the next election, eight seats are reserved for first years.