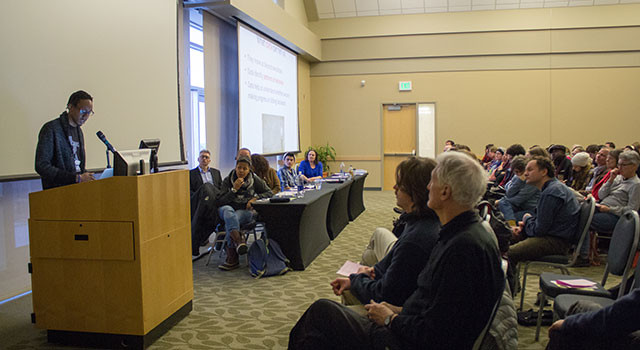 A new United Academics committee focused on civil rights hosted a discussion about racial justice in Vermont and at UVM.

The Civil Rights Committee hosted  and sponsored the teach-in event, “Vermont is NOT an Exception.,” Feb 23.

During the event, a panel of UVM professors, students and civil rights activists, such as Todd St. Hill from the We Charge Genocide movement in Chicago, discussed the issue of racial equality within Vermont and UVM.

This event was created by the recently-founded United Academics Civil Rights Committee, which was “inspired by the vibrant anti-racist movements that have grown in the wake of Ferguson and Staten Island,” according to the teach-in’s program.

“Unions across the country have adopted resolutions to address what we see as a problem with justice, and our union decided we needed to become a part of that broader effort,” Gennari said.

During the forum, students, faculty members and local residents were allowed to voice comments and questions to the panelists.

“I think it was very important because it is a very difficult conversation that all of us should have, and I think it was great because we invited the community and not just people on campus,”  junior Roxy Chang said.

“I didn’t grow up in the U.S., but coming to UVM, it’s a part of how I come to terms with all of these things they talked about, and racism does exist and it’s a problem in the state and in the school,” Chang said.

One of the first panelists to speak was UVM professor of economics Stephanie Seguino, who presented her recent study on racial disparities in Vermont State Police traffic stops.

Sequino believes that Vermont is similar to the rest of the country. We do worse than North Carolina, Illinois and Texas, Seguino said.

“We do worse than Texas, although that may be because it’s largely Hispanic, that is the minority that is targeted, and so I’m not suggesting that we make too much out of Texas, but it’s important to recognize that in many ways Vermont is like the rest of the country,” Seguino said.

“I thought it was really great. I mean, it was a breath of fresh air to me … and tonight I felt real communication that I didn’t think existed here in this country,”  junior Nick Patyk said.

“It was great hear people actually thinking about how to change something, and again it’s great to think and talk, but obviously it needs to end in precise and specific actions and goals,”  Patyk said.