The Changing Face of UVM: Students and faculty take a stand against budget cuts 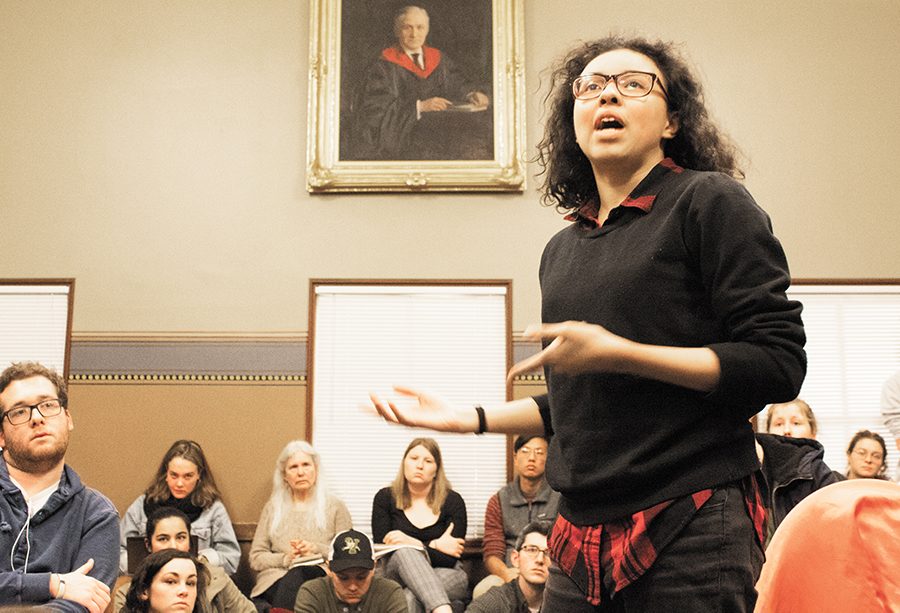 A portrait of UVM graduate John Dewey, a philosopher and proponent of an education as a means of social reform, overlooks the John Dewey Lounge as sophomore Charlotte Looby delivers an impassioned speech Feb. 5 at a United Academics meeting.

Faculty and student outcry has followed cuts in certain College of Arts and Sciences’ programs due to declining enrollment.

The faculty union, United Academics, held a teach-in Feb. 14 in front of Howe Library, while students participated with UA in letter-writing campaigns and distribution of posters critical of the administration.

Two classics professors who taught ancient history courses have retired in the past four years and weren’t replaced, and now senior lecturer Brian Walsh has not been rehired for next year, Franklin said.

The changes come as humanities majors have seen a 44 percent decline in enrollment since 2009, according to a Feb. 9 email from Falls and Provost David Rosowsky.

There are few places where Falls can afford to make cuts, but major traditional curricula are being lost, Franklin said.

“Do we want to be a university where students can’t study the history of Greece and Rome, two cultures that provided templates for American government?” he said.

Other areas of classics are also feeling squeezed.

“It was kind of chaos,” Jodoin said. “We spent a lot of time focusing on concepts the 200 and 300 students didn’t need.”

In addition to two lecturers not getting rehired, humanities and biology lecturers’ hours were cut, according to a December 2018 memo from Falls.

Nine additional lecturer positions will likely be cut in the next five years, according to the memo.

The declining enrollment reflects a demographic shift in the Northeast.

There are increasingly fewer college-bound students, which is causing more competition between institutions, Falls said.

The impact of this is especially felt by liberal arts programs, he said, citing Green Mountain College’s recent closure announcement.

Outside of Vermont, Hampshire College in Amherst, Massachusetts, may not admit new students in the fall and announced a desire to merge with another academic institution, according to a Jan. 15 Boston Global article.

Former student trustee Caitlin McHugh, a senior, said after the 2008 recession, students feel pressured by their parents and the job market to pursue STEM careers, leading to lower humanities enrollment.

“On the flipside of that, to be considered a good candidate to go out and get a job you need to have those humanities bases to be able to problem solve and communicate with people,” McHugh said.

“I have students coming in to talk to me every single week about whether or not they should shift to nursing or some applied field,” Bose said.

Linda Schadler, dean of the College of Engineering and Mathematical Sciences, said there is a impression among students that they can only get jobs with a STEM degree.

“There’s some validity to that impression, but it’s not true that they can’t get a job with a political science degree,” Schadler said.  “So I think some of it is perception as opposed to reality.”

Incentive-based budgeting, the model that determines college funding, allocates money based on the number of credit hours enrolled in by students in a college, Cate said.

IBB has advantages, like decentralizing the control of money, but it systematically disadvantages CAS by weighing other college’s credits monetary worth higher, said Ellen Andersen, associate professor of political science.

“IBB structurally puts CAS at a disadvantage in a way the dean can’t fix. The provost fixes that,” Andersen said.

The credit hour weightings are being eliminated in IBB 2.0, which is slated for implementation this summer, Cate stated.

“I think that the transparency that IBB has provided has given more people insight as to how things actually work,” Cate said. “There was just a small core of people in a central administration that were really involved [before IBB].”

UVM is limited by the cost of providing education, and administration and board of trustees are not keen on further raising tuition for students, Cate said.

UA President Sarah Alexander, associate professor of English, said UVM and other universities need to have Greek, Latin and classics, even if they are less popular or less profitable than other disciplines.

“I don’t see our mission as making money,” Alexander said. “A university is not a corporation. It does not run on what’s most profitable. It’s about the production of knowledge.”

At a Feb. 5 UA meeting, assistant French professor Charles-Louis Morand Metivier criticized the University’s priorities, citing the $95 million Multipurpose center project being worked on while lecturers are being cut.

Money raised in the Move Mountains fundraising campaign have gone toward scholarships and professorships in CAS, but a significant number of donors are excited about the Multipurpose center, said Shane Jacobson, president and CEO of the UVM Foundation.

Donated money must go to the area designated by the donor, Jacobson said.