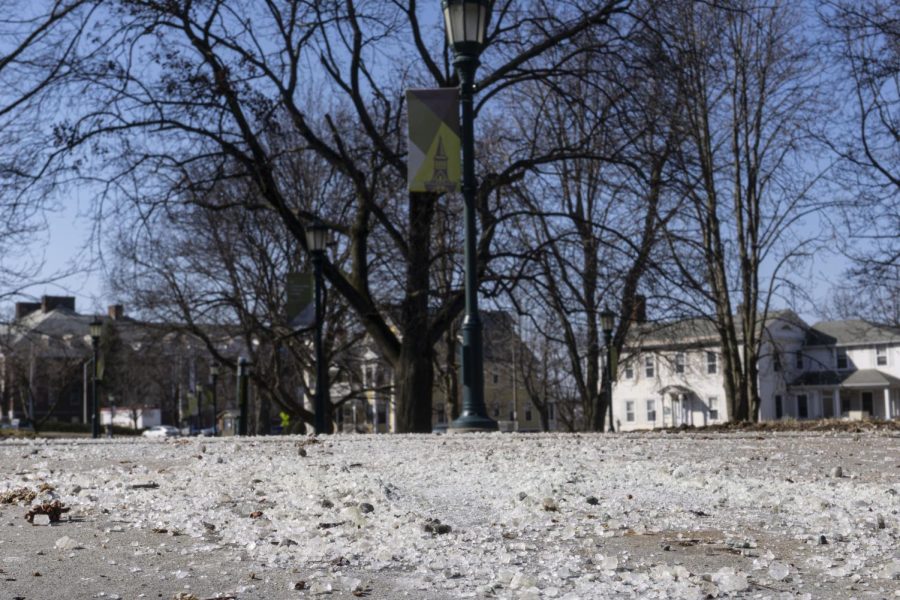 Road salt lies on a path through the Waterman green March 17.

A group of students, faculty and staff aims to minimize salt use to prevent structural and environmental harm, according to a March 4 press release.

The Salt Mitigation Task Force began in January 2020, when Lynn Wood, physical plant zone manager for the Davis and Trinity zones, noticed salt damage on buildings under her care, she said. Wood leads the care of over 100 buildings.

“I see a lot of the damage that happens to the buildings,” Wood said. “I’m also very much a problem solver. So when I see things like that, I want to come up with a solution that fixes them.”

Road salt undergoes a chemical reaction with concrete and metal, which causes the materials to degrade, she said. This has damaged doors, stairways, walls, pillars and steam vaults.

Salt prevents snow and ice build up, splitting it into sodium and chloride and blocking water molecules from bonding to each other, said Kris Stepenuck, professor at the Rubenstein School of Environment and Natural Resources.

When looking for ways to reduce salt use on campus, Wood reached out to professors Courtney Giles and John Lens from the department of civil engineering, who she previously worked with regarding engineering problems on campus, to initiate this collaboration.

Additionally, she reached out to Stepenuck, who previously worked around the state monitoring the environmental effects of salt on water, Wood said.

Stepenuck works with the Lake Champlain Basin Project, according to their website.

The LCBP aims to protect the natural environment of the Lake Champlain basin, according to their website.

After the snow melts, water carries sidewalk and road salt into bodies of water like Centennial Brooke, and downstream into Lake Champlain, where it continuously builds up, posing a danger to aquatic life, Stepenuck said.

“If salt runs off into surface waters […] it makes the water salty, which then can kill the aquatic life,” Steppenuck said. “So over time, we’re causing problems in lakes as well as streams that aren’t going to change. They’re only going to get worse the more salt that we put in the water.”

Keeping walkways safe despite the changes was the top priority, Walker said. They hoped to waste less salt while still keeping walkways clear by using more exact tools like the new HillTip salter. The HillTip is semi-automated, he said.

By pre-programming it, the staff can precisely regulate where and how much salt is released, helping to ensure there is little to no excess.

HillTip is a Finnish company that manufactures road maintenance tools especially for controlling ice and snow, according to their website.

On top of reducing salt, Physical Plant has looked for ways to reduce its impact on structures, including putting an epoxy coating on the bottom portion of doors to reduce damage, Wood said.

“If you’re getting close to morning time when […] the students are moving, you don’t have as much time to plow, you’re gonna use more salt to try to melt the snow,” Walker said. “So we’re trying to be here at the right times, that’s a big step in reducing the total amount of product that we use.”

Junior Nathan Claessens, a student in CEMS, got involved in the project this past February. Claessens meets every week with the group to brainstorm ideas to reduce salt use.

“We’re researching other ways that we can kind of change the current infrastructure to make it almost impossible to […] use salt,” Claessens said. “Conductive concrete is kind of what we’re focusing on right now or other sorts of walkways that would melt any type of ice.”

Conductive concrete has a special rod through it that allows it to be heated, melting ice and snow on top of it.

The group hopes to experiment with this next winter, Claessens said.