‘They don’t give a shit:’ faculty union fills John Dewey Lounge to discuss cuts to the humanities 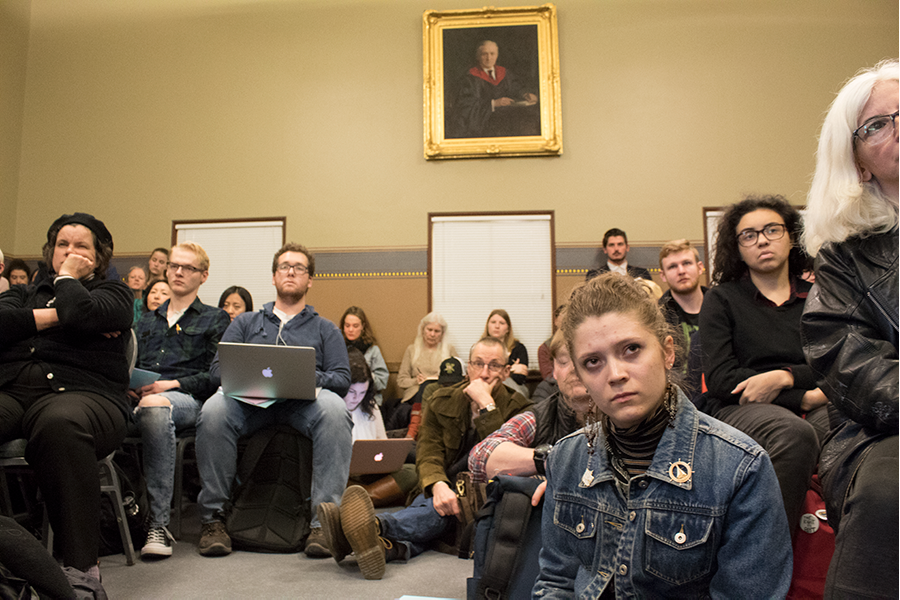 Sophomore Nina Singleton-Spencer sits among students and faculty during the discussion portion of a Feb. 5 United Academics meeting. Students have expressed their frustrations over the College of Arts and Sciences budget changes through posters, memes and protests.

The UVM faculty union plans to take action against recent cuts to various humanities departments in the College of Arts and Sciences.

The faculty union, United Academics, held a meeting for faculty and students Feb. 5 in the John Dewey Lounge to discuss the state of the humanities at UVM and possible responses to the administration’s decisions.

The room overflowed with students, faculty and community members. All 70 chairs were filled; students and faculty sat in the aisles, stood against the walls and flowed out the door and into the hallway.

CAS Dean Bill Falls announced the college would not renew contracts for two lecturers and would reduce the hours taught by 10 others, according to a December 2018 memo sent by Falls to CAS faculty and staff.

Suggestions for action included writing letters to the administration and board of trustees, spreading their message to the public through pamphlets and radio appearances and demonstrating on admitted student days.

Metivier said that the University’s priorities are skewed, citing the $95 million multipurpose center project being worked on while lecturers are being cut.

The UVM Foundation is fundraising for the multipurpose center, and its other costs will be paid for by an increased student fee by classes that will utilize the facility upon its completion, according to a November 2018 Cynic article.

“If there’s a burden on this University, it’s the oligarchy that sits on our shoulders,” Walsh said.

Attendees also discussed how students can get involved in protesting the administration.

Junior Scarlett Moore, a member of UVM’s International Socialist Organization, said the best way to win student support is for UA to take up demands that students care about, like the needs of minority student groups.

Senior Charlotte Malling, chair of the SGA academic affairs committee, said the senators on her committee are not taking sides, but they support UA since they are working to protect the humanities.

“We’re working to make information from all perspectives transparent and we all have the same goal: protecting the integrity, diversity and rigor of our liberal arts program,” Malling said. “Let’s work together to make this information transparent to students— student responses have historically been the most effective.”

“They are not going to throw you out of classes,” Kete said. “You’re here. They want your money.”

The meeting also touched on the announcement of the sole candidate for the next University president, Suresh Garimella, executive vice president for research partnerships at Purdue University, according to a Feb. 4 email from David Daigle, chair of the UVM board of trustees.

Daigle said in a Feb. 3 interview with the Cynic that announcing Garimella is the sole finalist does not guarantee he will be the next president. Garimella will be on campus Feb. 13 to 15 for public meetings with the campus community, according to the email.

That decision remains up to the board, Daigle said. The process was a hybrid partially private, partially public process, which is the new standard in the market for University presidents, he said.

Sarah Alexander, UA president and associate professor of English, said the process for selecting the next president excluded students and faculty more than in the past.

“It does not demonstrate a commitment to shared governance,” Alexander said.

Metivier expressed similar sentiments about faculty being shut out from the process.

“The candidate, let’s be honest, is our next president,” Metivier said.

This story updated at 11:12 a.m. on Feb. 6 to include additional comment from Malling.