Time off trouble for election 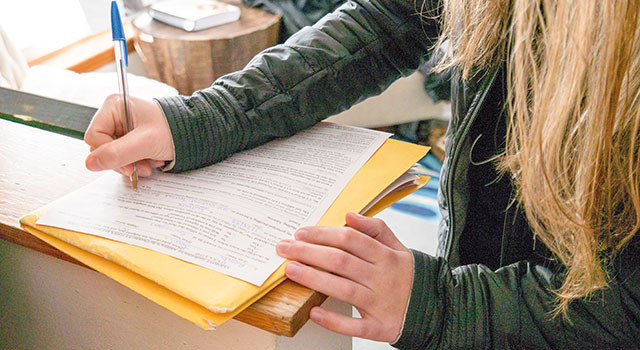 For the Ward 1 and Ward 8 elections, absentee ballots may provide the majority of the votes March 3.

Eugene Bergman, senior assistant to the Burlington city attorney, said that Town Meeting Day, or Burlington’s local election day, has been held on the first Tuesday of March since the 1800’s.

If a person is not in town on Town Meeting Day the only way to vote is to request an absentee ballot and get it to the town clerk by 5 p.m. the day before Town Meeting Day, according to the Election Law Handbook.

Last year, approximately 17.7 percent of the total votes cast were through absentee ballots, according to the final statement of votes for the 2014 election.

Junior Khalil Lee, senator on the SGA finance committee and a member of the Ward 8 Neighborhood Planning Assembly, believes most students know what an absentee ballot is.

Students actually participating in the election and using absentee ballots is an entirely different matter, he said.

“It just makes elections very small,” Lee said. “Historically these things don’t get more than a couple hundred people involved which is kind of a shame.”

In fact, only about 26 percent of registered voters voted during the 2014 election, according to the statement of votes.

“It’s challenging to encourage the highest possible student participation if all of the students are gone on Election Day and their only option is absentee voting,” said senior Maggie Love, SGA senator and chair of the Committee on Legislative Action.

Lee believes that holding town meeting day during spring break has always been an issue.

“They know full well we’re not going to be there,” he said.

Spring break for UVM has been scheduled over the first Tuesday of March since 2010.

During the Oct. 12, 2009 Faculty Senate meeting, the 2011 spring recess was approved so their would not be an extra “Town Meeting Day Recess,” according to the meeting notes.

“Well, we’ve talked about that before as to what it meant,” Lee said.  “Historically, they’ve had [Town Meeting Day] during spring break as a way of keeping students uninvolved in the process.”

In 2013, the city wards of Burlington were re-districted so that there was an eighth ward that included students who live on campus. In order to participate in Town Meeting Day, a person has to be registered to vote and present at one of the polling stations, according to the Election Law Handbook.

Rep. Peter Fagan has been a Vermont resident for 47 years and has a son who is a senior at UVM.

“I don’t ever remember it not being the first Tuesday of March, which would, I guess, put that solidly on your vacation calendar,” Fagan said.

The academic calendar is created by the Student Affairs Committee and the Registrar. It’s presented to the Faculty Senate to approve, said Keith Williams, UVM registrar.

“At the time we were making the calendar, the student government at the time wanted to have spring break during the first week of March because that was when their friends from other schools were having spring break,” Williams said.

Chittenden spoke during the public forum at the Jan. 27 SGA meeting and presented his ideas for changing the calendar.

During the meeting, many senators brought up the fact that spring break occurs over Town Meeting Day and asked to move spring break to allow students to actually be in town to vote during the election, according to the meeting minutes.

Chittenden has now taken this into consideration and added it to his proposed calendar changes. If any of Chittenden’s proposed changes are taken into effect, the change would be seen for the 2016-2017 academic year, Williams said.