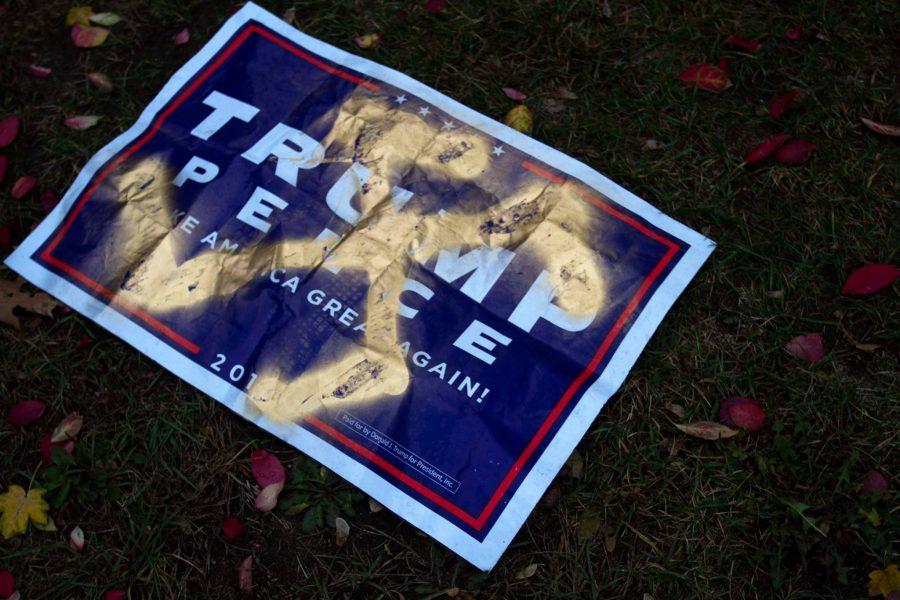 A student found a campaign sign with a spray painted swastika Nov. 9.

Sophomore Isabelle Schechter discovered a campaign lawn sign three doors down from the Hillel center, where she is working as an engagement intern, she said.

The Hillel center is a Jewish organization on campus.

It is unknown whether the sign was meant to be directed at Hillel. The sign has since been removed; UVM police were not able to comment at this time.

“[The sign] made me feel terrified and nauseous,” Schechter said. “It was like a punch in the stomach about this reality … that we’re facing.”

The students who found the sign had thrown it into a puddle in front of the Aspire Together pregnancy testing center before bringing it to the attention of Hillel staff, Hillel Engagement Associate Max Davis said. 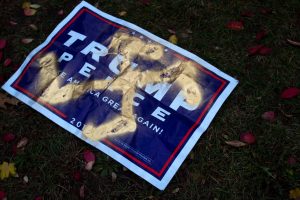 “For Jewish students,” Matt Vogel, executive director of Hillel said, “no matter what the intent is, seeing a swastika holds a very deep and painful association with [the Holocaust]; a deeply tragic part of our history.”

Sophomore Arielle Cheifetz said she was disturbed by discovery of the sign because of the swastika’s historical context.

“The part [about this] that is the most disturbing,”  Cheifetz said, “is that this occurred on the anniversary of Kristallnacht, a night [in 1938] where almost 200 synagogues [in Germany, Austria and Czechoslovakia] were destroyed, over 8,000 Jewish shops were sacked and looted and tens of thousands of Jews were removed to concentration camps.”

Cheifetz said she has concerns over the implications of the swastika being found on a sign supporting President-elect Donald Trump, and that she believes minority groups are preparing for hateful speech or actions to be committed against them. This unease is echoed by other members of the community.

“I’m worried there’s going to be much more of this since the election went in favor of Trump,” senior Connor Clark said. “ [He is] someone who is openly hateful toward minority groups.”

The sign was brought to Hillel because students feel it is a place where they can feel comfortable and bring up these types of incidents, Vogel said.

“I’ve seen the importance of the Hillel center as a space where students feel safe,” Hillel Assistant Director Sharon Silverman said. “ I know people are getting what they need for nourishment, whether that’s a bagel, a conversation, a hug or an ‘I see you.’”

Both Silverman and Vogel said students have been coming into the Hillel center for support following Trump’s election.

“This day hasn’t compromised our values,” Silverman said. “We are here for students more than ever, and that’s something that’s going to continue on as we go through some changes for all of us.