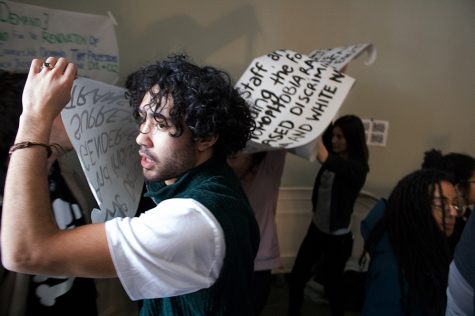 After multiple protests led by student-led racial justice group NoNames for Justice, groups around campus have released statements ranging from warnings to support.

NoNames released an email statement Feb. 27 recapping the events of the Waterman takeover, in which hundreds of students occupied the building from noon to 10 p.m. Feb. 26.

During the takeover, NoNames leaders spent time in negotiations with President Tom Sullivan, starting around 5 p.m. While leaders requested a mediator, they said Sullivan refused.

While some classes continued in the building, students walked out of some classrooms to join the protest.

Protesters occupying the building used some rooms to study, learn about the demands and create healing spaces for students of color, the email stated.

The statement also served as a warning to community members who might continue protests.

The statement expressed the University’s regret for the disruptions caused by protests, and stated that officials are prepared to take disciplinary and legal steps to address future disruptions.

Following the protests, the Center for Health and Wellbeing sent out a statement signed by
Jennifer Archambault, CHWB marketing coordinator, Feb. 27 expressing the center’s commitment to the wellbeing of all people of color at UVM.

The center also stated they were taking a stance because racism is a public health matter.

“We see you. We hear you. Black lives matter. We are committed to putting actions to our words,” the email was signed.

Four University identity centers  — the LGBTQA Center, the Mosaic Center for Students of Color, the Interfaith Center and the Women’s Center — sent out a statement of support Feb. 27.

The centers will be hosting a conference regarding activism from 1-5 p.m. Saturday, March 3 in the Waterman building, the email stated.

The identity centers expressed their appreciation for students working to uphold and improve the common ground, the email stated.

Sullivan sent out an email Feb. 26 detailing conversations that he took part in with the deans of all the colleges over the weekend. The conversations addressed the protests and ways to expand the University’s commitment to diversity and inclusivity, the email stated.

The email detailed steps that will be taken to improve diversity and inclusivity on campus, including:

Providing and requiring professional development for D1/D2 professors around curriculum development and managing conversations and interactions pertaining to diversity
Creating a position to help the college develop and implement the required training as well as diversity-related curriculum
Creating a recruiter position to help the college diversify the candidate pools for faculty positions, as well as provide resources to recruit, hire, and retain diverse faculty and staff members
Providing support for diversity related positions
Having each college formalize professional development for all faculty focusing on diversity and cultural competency. This will be done through faculty meetings, special seminars, or faculty retreats
Ensuring that commitment to diversity is included in the annual faculty review process

Sullivan stated that the deans of each school are on board with the demands outlined in his email.

Bill Falls, dean of the College of Arts and Sciences, sent an email to the CAS listserv outlining the steps that the college plans to take to improve diversity and inclusivity on campus.

Falls also invited students to speak with him in an open forum at Waterman, Feb. 28 at 6:30 p.m.

The actions Falls intended to take included the steps outlined by Sullivan, as well as:

Working  to increase the support for and visibility of the work of the Faculty Diversity Fellow, Professor Jinny Huh and the Associate Dean, who holds the diversity portfolio, Professor Abby McGowan.
Directing the creation of a Student Diversity Fellow who will work with the Faculty Diversity Fellow and Associate dean to ensure that student voices are included
Supporting the work of the College’s Diversity Task Force to attempt to achieve a more diverse faculty, and ensuring that the Task Force will work closely with the recruiter mentioned in Sullivan’s plan in its efforts to achieve a more diverse faculty.
Communicating progress made on the Climate and Diversity pillar of the College Strategic Plan as well as outlining specific goals to be achieved by 2020.

At around 10:50 p.m. Tuesday, Feb. 27, the SGA voted to support the NoNames for Justice movement.

The resolution they passed stated that SGA “understands that NoNames for Justice is an activist group on the University’s campus that seeks to embody a holistic approach to activism rooted in self-care, empathy, accountability, cultural responsiveness and rectitude.”

Debate on the resolution lasted for nearly three hours.