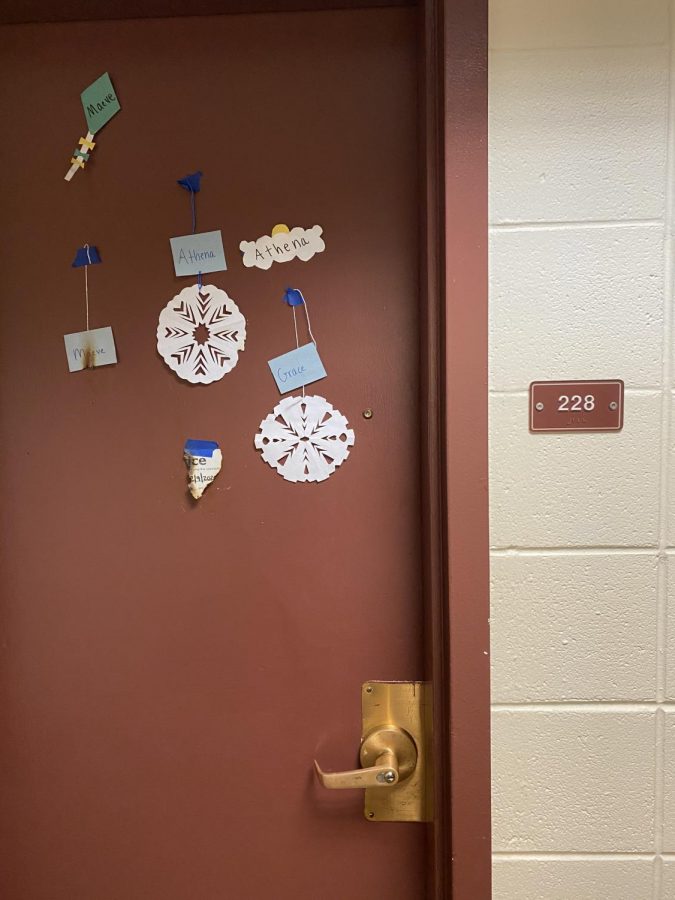 Paper decorations and a notice of room inspections show the lingering marks of fire. Five first-years were charged with arson after setting paper decorations on several doors on fire, according to UVM Police Services.

UPDATE: One day after UVM Police announced it had cited five UVM first-year students into court for arson, the Chittenden County State’s Attorney’s Office has declined to prosecute the students.

Second degree arson carries a penalty of up to five years in prison and a $1,000 dollar fine, according to Vermont law.

UVM Police believes the five students were responsible for setting pieces of papers on other student’s doors on fire inside of Harris residence hall early Feb. 9.

The first fire alarm was activated at 1:37 a.m., and by the time Burlington firefighters arrived, the fires were already out.

“We charged for arson, because obviously setting doors on fire inside a residence hall is particularly dangerous,” Bilodeau said. “I think our community had that sort of expectation that police would respond in a way that takes that very seriously.”

Bilodeau said it’s not unusual for the state’s attorneys office to not pursue charges against college students, but the seriousness of the Feb. 9 fire needed a serious response.

“I think with serious crimes, it’s important to let the state’s attorney see those cases and make that determination,” he said. “I think there can be factors that we’re not aware of, but that’s standard in policing.”

Ruby Bryan, a first-year who lives on the second floor of Harris, said the group of students lit a piece of paper on her door on fire.

Bryan said she had just laid down to go to bed when the fire alarm went off and initially didn’t think much of it.

“I was like ‘oh, it’s just Harris being terrible on a Saturday,’” Bryan said. “I didn’t think it was an actual fire.”

But as she stepped outside her dorm, her nose was filled with the smell of something burning, Bryan said.

“It smelled so toxic burnt, like burnt chemicals, not toast or anything,” she said.

After the building was deemed safe by first responders, Bryan said she noticed the damage to her door.

Byran and her roommate had decorated the door with stickers of Peppa Pig, a children’s cartoon show character. Now in some places, Peppa’s face has been smoldered away, she said.

At first, Bryan thought the incident was just annoying, but once police started asking questions, her thinking shifted, she said.

“What if the door actually caught on fire?” Bryan said. “This is Harris. We’d have to jump down two floors. There’s no way out if there’s actually a fire.That’s so fucked up. Something could have actually happened.”

The fires do not appear to be targeted, Bilodeau stated in a Feb. 9 email.

Editor’s note: This story was updated at 10:48 p.m. Feb. 10, to include new information that the Chittenden County State’s Attorney’s Office declined to prosecute the five students.