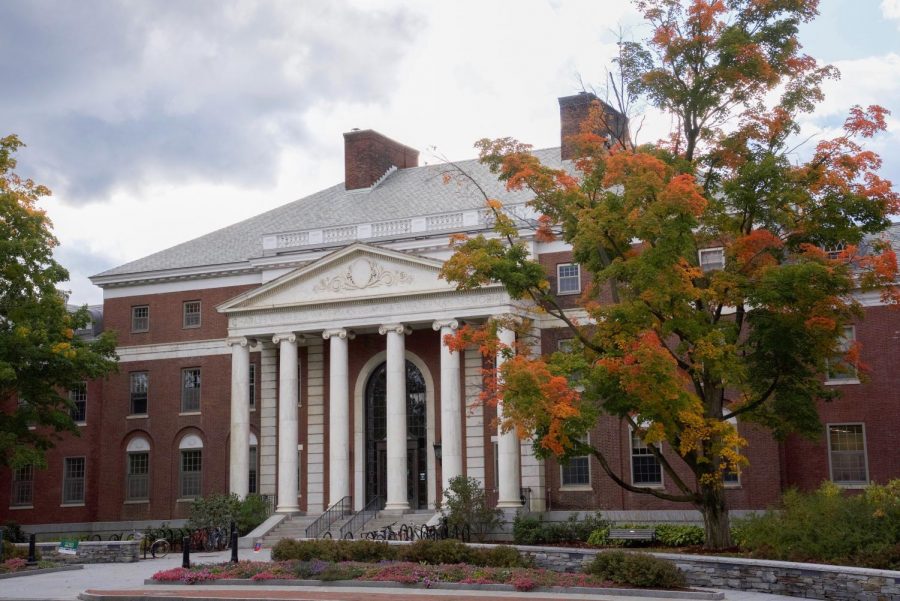 The Waterman building located on the corner of South Prospect Street and College Street stands with nobody around it, Sept. 30. Waterman is the largest academic building on campus.

The University of Vermont is reconsidering their long-held seven college organization in favor of a dramatic reorganization into four broader colleges, which could occur as early as March.

260 faculty members attended the monthly Faculty Senate meeting Nov. 16, many of whom said they were concerned about where they fall in the University’s potential reorganization, and were interested to hear the proposals surrounding the reconfiguration.

Despite these concerns raised by faculty, however, the University is pushing forward with its plan.

“This has been a broken process,” Professor David Feurzeig said during the meeting. “People are doing a great job of being diplomatic, but we’re ticked off.”

In the spring of 2020, a Faculty Senate committee put forth a proposal to reconsider the organization of the University, and create a new system to reflect the recent growth and changes in the UVM curriculum and academic offerings.

The morning of the Nov. 16 meeting, a last minute proposal was shared with the senate by Professor Thomas Borchert, advocating for a complete restart of the reorganization efforts and the establishment of a collaborative ad hoc committee to better represent the faculty.

Many senate members said they felt the reorganization plan excluded faculty voices and did not account for all departments. Faculty members said they were blindsided by this proposal, and had not received information on its financial implications or where their department would fall within the four proposed colleges.

Associate Professor Susan Comerford was frustrated with the disconnect between the Senate and the faculty, and added her comments into the meeting chat.

“When have we ever had 260 people at a faculty senate meeting? Faculty are tired of being an afterthought,” Associate Professor Susan Comerford wrote.

Provost Patty Prelock said the goal of this change was to enhance the student experience, reduce complexity and redundancy in the curriculum framework, increase forward-thinking academic alignments and reduce administrative costs.

“The plan was always to talk with the Faculty Senate exec,” Provost Prelock said. “[We will] identify with them together what should be the next steps and how we should roll this out.”

Amid concerns from faculty, President Garimella unmuted his microphone and said that his personal interest is in keeping the administration lean, and that he hopes to make it even leaner.

However, there are no specifics available yet as to where departments fit in, or how this will impact finances.

Due to lack of faculty support, the senate moved to vote on the proposal to restart with a new joint committee, rather than on whether the reorganization should move forward. The motion passed with 55 approvals, three oppositions and five abstainments by senate members.

The new ad hoc committee will bring forward its findings over the need to reorganize alongside their proposals no later than December 2021. The Senate will consider their findings in Spring 2022.

“You are asking the faculty to make a decision about a reorganization where they cannot see themselves,” Professor Dale Jaffe said in response to the reorganization proposal. “We are not outsiders, this is our University, we have a right to know where we land in a scheme you want to propose.”

In addressing the concerns of the faculty around where they fit into the four proposed colleges, Garimella said that he felt they did not need to get into the weeds of what departments go where.

“This is not far enough along to figure out anything meaningful in terms of finances,” President Garimella said in the meeting. “[We] need to work at an aspirational level first.”

The implementation date of the original reorganization plan, which is still continuing development despite concerns from faculty, is in March. Many faculty at the meeting said they were concerned and confused about the fast moving timeline.

“I really would like to understand the reason for the aggressive timeline,” Helga Scheckenberger, department chair of German and Russian said. “To do something so radical in such a short time does not seem very prudent.”

“Sharing the committee’s work, progress report, methodologies, and insights would go a long way toward building confidence in any committee’s work,” Professor Libby Miles said. “Faculty need the background documents, not just a two page powerpoint asking where we see ourselves.”

Many faculty voiced concerns in the meeting, and said they were not informed or consulted after the reorganizations were originally proposed.

He announced that Christopher Burns, Faculty Senate vice president, will serve as interim president until July 1, 2021 and Senate Member Evan Eyler will take Burns’s position as Faculty Vice President during those six months.

The Executive Committee will hold a president elect nomination and election process in upcoming months to determine who will fulfill these positions permanently.

Senate member Wade Carson said he was concerned that these requirements would affect accredited programs that have specific criteria and prevent students from being able to complete a minor in some departments.

“We’re going to have this central committee that will work through some of the logistics,” responded Professor Pablo Bose. “Especially for programs that don’t have a whole lot of wiggle room in terms of their existing major requirements.”