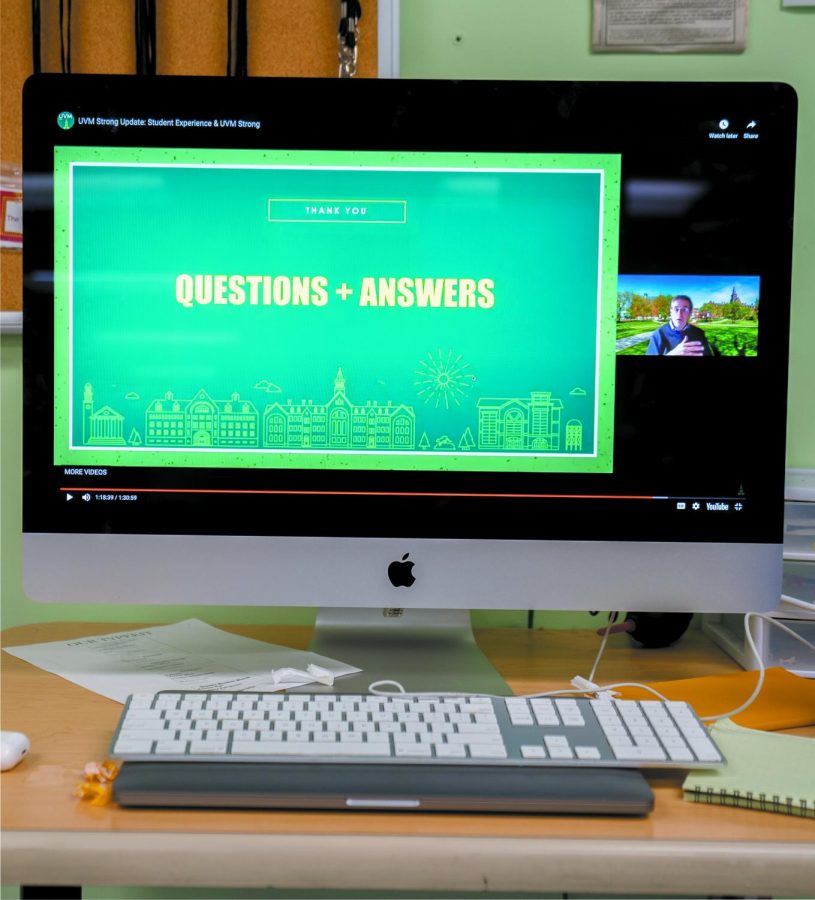 UVM is struggling to keep track of weekly student COVID-19 tests, according to one administrator, despite reassurance from the University that testing and contact tracing have been a success.

Gary Derr, vice president for operations and public safety and Annie Stevens, vice provost of student affairs, spoke to students and their families during a UVM livestream event Sept. 21 where many asked questions and raised their concerns to the two decision makers.

One anonymous parent said their student was wrongly fined by the University for skipping mandatory weekly COVID-19 testing even though the child had not missed a single test.

“Tracking all the right names for testing has been more challenging than we thought,” Derr said in response.

According to the Green and Gold Promise, missing a test results in a $250 fine after the first violation, and suspension after the second.

After apologizing to the parent, Derr recommended talking to the Center for Student Conduct and going through an “appeals process” while the University checked its records, then he moved onto the next question.

Another anonymous parent asked what UVM is doing to control student activity on Redstone.

150 students gathered on the Redstone Green on Sept. 6, some ignoring social distancing protocols, pulling down masks to talk to friends and openly carrying cans of beer, according to a Sept. 16 Cynic article.

Stevens responded, saying that, “Police Services are on and around the Redstone Green, and will be writing documentation for students,” who do not follow UVM guidelines.

The number of reported test results received has fluctuated over the four weeks since classes started.

This last week, 10,874 results were received. However, during a board of trustees meeting Sept. 25, Stevens said 11,900 students in total are back on campus.

Some of the issues in compliance come from students misunderstanding when exactly they’re supposed to get tested, stated UVM Spokesperson Enrique Corredera in a Sept. 23 email.

“Students wrongly [assume] that it’s fine to test once a week, regardless of how many days go by in between tests,” he stated in the email. “[However], students have to test every seven days, and no later than nine days, to remain in compliance.”

Fluctuations in the reports can also occur because “students are not necessarily testing on the same day of the week each week”, he stated.

In a Sept. 16 email to students, Derr reiterated the importance of testing and thanked students for “meeting their testing responsibilities.”

“We are currently working through compliance issues and notifying those not in compliance of the clear expectations and consequences, which include fines and other sanctions, including suspension,” he stated.

Another parent asked about dining options for students during the livestream event.

“Can you provide an update on the dining situation? We hear that the options are very very limited,” one question stated.

Despite these reports of limited dining options, however, Rafael Rodriguez, director of Residential Life, said that he did not notice any issues with dining on his regular walks around campus.

“I’ve been to Campus Marche, where the sushi and the burrito station are both open. I’ve been to Central Campus dining, and every single station was open there,” he said. “I’d like to get some feedback from students to see what students mean by ‘limited.’”

Stevens also said that the sheer amount of students in the dining halls at once may be a contributing factor.

“When a lot of students come in to eat at once, the food may just run out, and some of the options become more limited,” she said. “We will certainly give that feedback to dining services. We are doing as much as we can.”