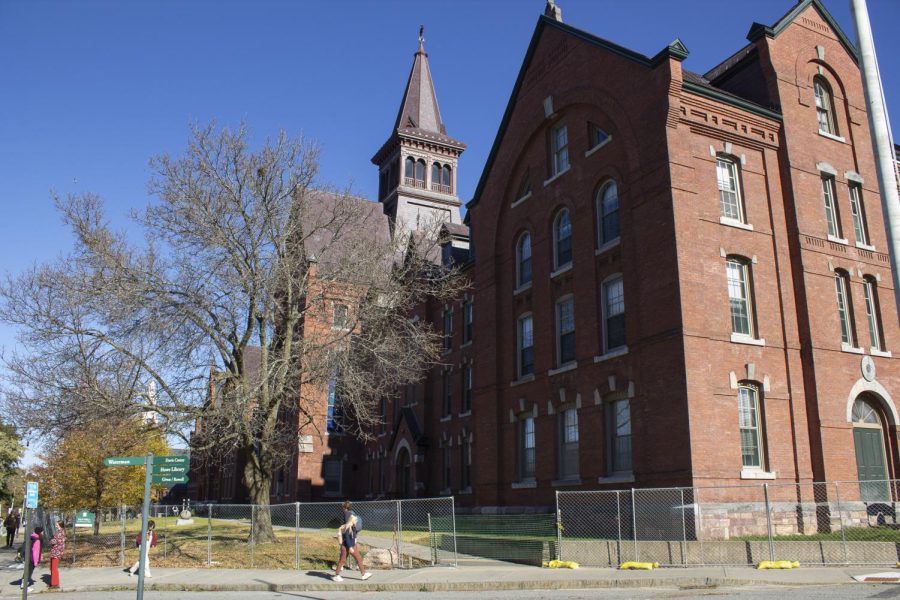 Old Mill stands on University Place free of construction trucks Oct. 29. A fence still surrounds the front of Old Mill to protect the grass that is growing.

UVM completed its estimated $1.5 million restorative construction of Old Mill after 17 months, according to an Oct. 27 email from UVM Spokesperson Enrique Corredera.

The construction extended past its expected duration of May 11, 2020 to Sept. 30, 2021, according to an estimate from a statement on the Physical Plant Department website Aug. 2. Old Mill was originally built in 1825, according to the email.

“The project is complete except for site restoration,” the email stated. “The fence will be going away at the end of next week. It was kept there for two weeks to give the grass a chance to grow without pedestrian traffic.”

Physical Plant reconstructed the southeast side of the building. Areas of brick were replaced and reinforcement was added to better structurally support the wall with the stained glass window in Dewey Lounge, the email stated.

In 1883, the building was remodeled from a Federal Style to a High Victorian Gothic Style according to a University Green Area Heritage Study headed by the Historic Preservation Program at UVM.

Old Mill underwent additional renovations in 1995 to create office and classroom spaces, the email stated. Renovations were completed in May 1997 and cost $17 million.

Luce Hillman, executive director of facilities management, declined to be interviewed for this article and referred the Cynic to Corredera’s emailed statement.