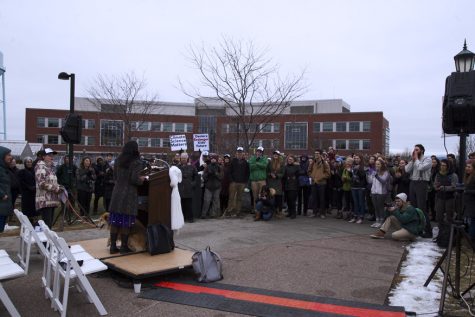 On Inauguration Day, a new non-partisan environmental club called UVM Stand hosted speakers at the Davis Center flagpole at 10 a.m. Jan. 20 to talk about facing climate change issues over the next four years and beyond.

Students and professors concerned about climate change organized the rally in response to the recent presidential election results.

“We feel that now, in this moment when the administration does not reflect the values we stand for, it’s the people’s role to stand up and speak for what we believe in,” senior Erica Gilgore, a member of the club, said.

State Rep. Ram, a UVM alumna and former SGA president, spoke about including the needs of all people while penning new policies and regulations.

Her personal story dealt with moving California dry cleaners away from using harmful chemicals in their businesses.

Because environmentally-friendly cleaning products can be expensive, Ram worked with low-income business owners to make sure they could afford the transition.

“It is up to you to join the light at the crossroads,” Ram said. “Find who is not here, who is left behind and bring their voice to the table.”

Provost David Rosowsky said he advised students to learn about climate change through discussions about environmental issues while at UVM.

“The good hands are yours, so let’s get started,” he said. “Your planet is calling you.”

“This was pretty much my first rally,” first-year Dylan Depalma said. “It’s cool to be around a bunch of people with the same mindset.”

In a letter read at the event,  Sen. Bernie Sanders promised to “work to defeat policies that move our country backward” and voiced his opposition to the nomination of Scott Pruitt for EPA administrator.

Jon Erickson, professor in the Rubenstein School for Environment and Natural Resources, emphasized the importance of starting climate crisis action at the state and university level.

Colburn spoke last and read a letter from Lieutenant Gov. David Zuckerman. Zuckerman called on students to participate in government and interact with their legislators.

The rally ended with participants signing a green banner with their names or personal purposes for attending the event. 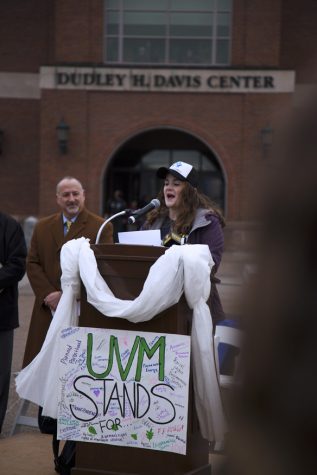 “I think we should all feel obligated to be here,” sophomore Colby Bosley-Smith said. “Climate change affects all of us.”