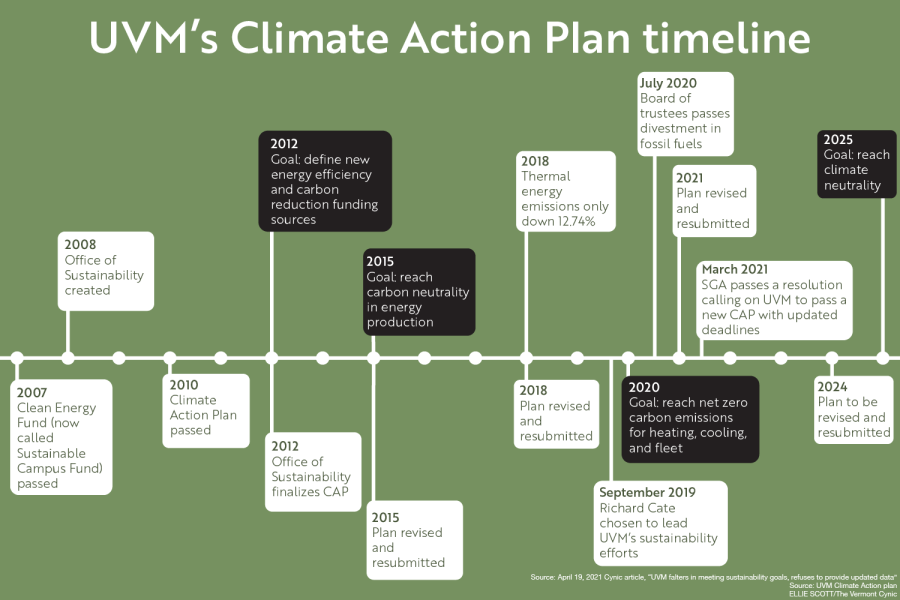 The Office of Sustainability released updated goals for this year in an Oct. 18 email to the UVM community following the University’s failure to adhere to its original Climate Action Plan.

Although Richard Cate, vice president of finance and administration, said the original goals went unmet due to inadequate technology, some students said it was due to the financial limitations of the office.

The University failed to meet their 2010 CAP goal of thermal energy carbon neutrality by 2020, which caused dissatisfaction amongst many student groups, according to an April 19 Cynic article.

“It was a desire, a very strong desire, to do those things, but they just weren’t achievable in the timeframe,” Cate said. “The technology hasn’t advanced [and] I think some people thought that technology would change some of this in terms of the cost and make it more affordable.”

The Office of Sustainability inevitably suffers from financial limitations, although those haven’t had a huge impact on the Office’s ability to get things done, he said.

“If there’s one uniform characteristic it’s that everybody needs more money than what I can give,” Cate said. “It’s always a balancing act.”

Cate oversees the finances of 600 staff members, including the Office of Sustainability, he said.

Abigail Berkowits, member of SGA’s Climate Action Plan ad hoc said they are not confident in the Office’s ability to meet new goals, though they do feel supported by the Sustainability Office.

“Historically because of the lack of following through that the administration has had with previous students’ demands […] I fear that they won’t follow through,” said Berkowits. “Its frustrating because it’s all a marketing plan.”

Cate’s oversight of the Office of Sustainability may be an issue going forward, given his position in control of University finance, Berkowits said.

“I think that [Richard Cate overseeing Office of Sustainability] absolutely is a problematic relationship,” Berkowits said. “I think it just goes to show that the University cares more about money than they do about the safety of students and the planet.”

Elizabeth Palchak, director of the Office of Sustainability, said Cate serves as an active supporter of sustainability initiatives and plays an important role in the office.

“I’ve known Richard [Cate] for years and I have always seen him as an ally to the office,” Palchak said. “I think finances are complex and I can’t really say anything about that, but I meet with him regularly and I’ve felt nothing but support since I’ve arrived.”

Senior David Sidelle, president of the environmental club Organize, said administrators need to do most of the work to create impactful environmental changes.

“A lot of these transformations that need to happen environmentally require expertise, planning and a lot of time and effort,” Sidelle said. “They’re not the kind of thing that can be […] figured out by students who are already so burdened by the school semester.”

Palchak said she was hired Aug. 2 to listen to student and stakeholder ideas and help initiate a sustainability plan across campus over the next year.

The Comprehensive Sustainability Plan will take input from a Campus Sustainability Working Group and other stakeholders, according to Cate’s Oct. 18 email to the University.

Palchak said they aim to release a draft after receiving feedback next summer.

Palchak will also hear from the SGA Committee on the Environment and the Climate Action ad hoc group in the near future, according to an Oct. 19 email from Palchak.