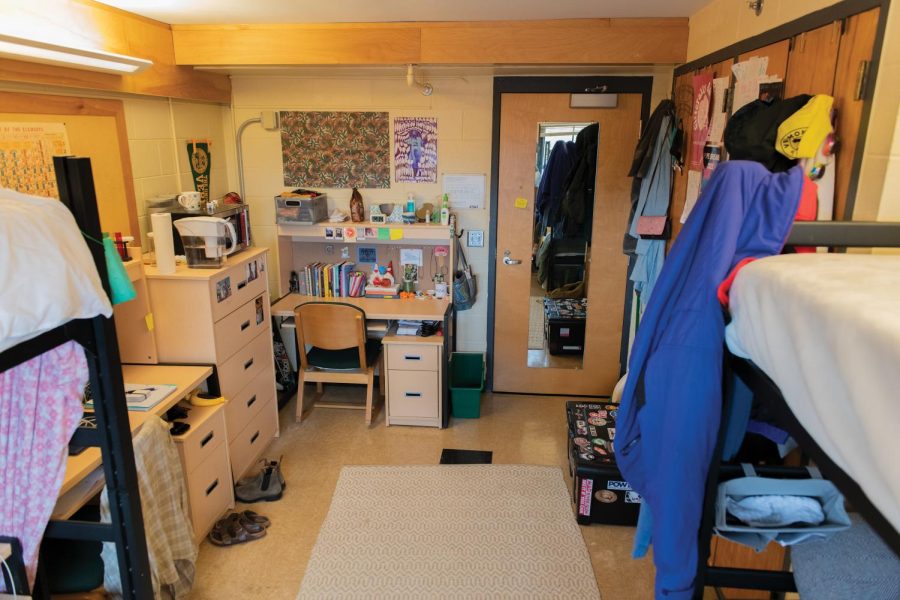 A triple dorm in Davis Hall on Redstone campus.

ResLife did not use triples in fall 2020 because of the pandemic-related lower numbers of students on campus, the email stated.

“By and large, there is no significant difference between students who are in triple rooms or double rooms,” Hytten said. “They are academically achieving in the same sort of ways. Their experiences are typically the same.”

However, students should not have to experience living in a triple, said first-year Lillie Tyroler, who lives in a forced triple in Davis Hall.

All triple rooms on campus are double occupancy rooms housing three people, according to the 2021-2022 ResLife Contract.

Students often refer to a room designed to house two people that was converted to house three people as a forced triple, Hytten said.

“Just because you can technically fit a third person, doesn’t mean that you should,” Tyroler said.

The triple is cramped and does not offer Tyroler a lot of personal space or time, she said.

“I just never go into my room,” Tyroler said. “I feel like I never have a space that’s my own. […] It’s just a place where I put my stuff and sleep in.”

Tyroler did not expect to live in a triple and didn’t know it was an option until she found out her housing details before moving in, she said.

“Here in Residential Life, we try very intentionally to not talk about forced triples,” Hytten said. “That is language I think students and parents have started to adopt.”

The requirements for an effective triple rely on a fixture count, which is the ratio of students to bathroom facilities, Hytten said.

A private triple is a double occupancy room for three people with a shared full bath,. It costs $8,058 for one year, the contract states. These are located in UHeights North and South.

A suite triple is a double occupancy room for three people with four to seven people sharing one to two full baths. It costs $7,664 for the year, according to the contract. These are located in University Heights North and South as well as the Trinity Campus Back Five.

A traditional triple is a double occupancy room for three people with a common hallway bath. It costs $6,934 for the year and is located in all halls except UHeights North and South, Living/Learning, Central Campus Residence Hall and the Trinity Campus Back Five.

Sophomore Jack Pitblado chose to live in a triple in Ready Hall this year because of its financial benefits.

“We save a good amount of money living in that living arrangement, [which] is preferable to paying to live in a single or something,” Pitblado said.

Still, Pitblado wishes triple rooms were larger than double rooms to accommodate the extra person they house, he said.

“It’s not fun to have the same size room as the people living next door [in a double] and they have more walkable space,” Pitblado said.

However, Pitblado likes having two roommates since they are his friends and enjoys living with them, he said.

“I would say I’ve had a good experience living at UVM, but living in a forced triple has definitely been annoying at times,” Pitblado said.

First-year Kiely Hills, who also lives in a forced triple in Davis Hall, thinks her living situation is unfortunate but overall positive.

“It can have negative aspects,” Hills said. “But I don’t know if I would change it if I could go back.”

When Hills learned she would be living in a triple, she expected the room to be larger than a double and felt disappointed when it was not, she said.

However, Hills is close with her roommates and enjoys living with them, she said.

“It’s a really fun dynamic to have three people, if you take away the [lack of] space,” Hill said.

In the future, ResLife wants to implement incentives for more returning students to opt into living in triples, Hytten said.