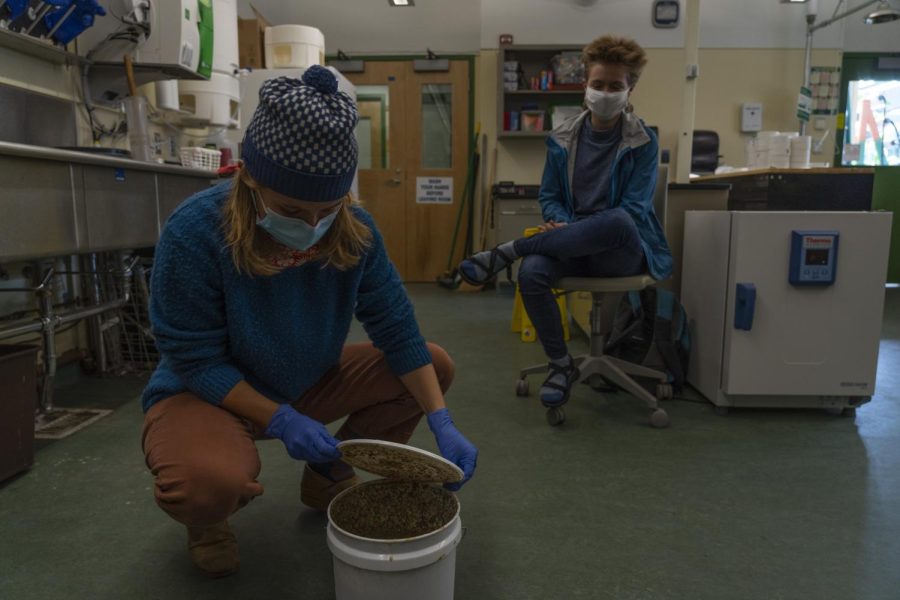 Two graduate students work in a lab where they research uses of biogas produced from food waste through anaerobic digestion.

This article was updated Nov. 28 at 12:54 p.m. to contextualize information about compost processing.

Roy, alongside Porterfield and graduate student Sarah Hobson, decided their research would focus on ice cream packaging because of its production in Vermont, Porterfield stated in an Oct. 27 email to the Cynic.

“I’m looking at ice cream, packaged ice cream that’s gone through the depackager, and I’m trying to figure out how much biogas we could produce from that,” Porterfield said. “Biogas is produced through anaerobic digestion.”

Biogas is a combination of methane and carbon dioxide which is produced by bacterial decomposition of organic waste, according to the Merriam- Webster dictionary.

Anaerobic digestion is a sequence of processes that break down biodegradable material when there is a lack of oxygen and produces biogas, according to the American Biogas Council site.

“One challenge with food waste is that over one-third of food waste in Vermont is still packaged,” Roy said. “How to beneficially use that material is an open question right now.”

All of the plastic, such as price look-up code stickers from produce, travels to the compost piles and into the final compost product. The plastic then spreads into the soil and throughout the environment, Hobson said.

This only applies to small plastics that pass through Chittenden Solid Waste District’s Organics Diversion Facility filtration system, according to a Nov. 22 email from Michele Morris, CSWD’s director of marketing and communications.

Green Mountain Compost screens out all plastics larger than three-eighths of an inch, the email stated.

“I don’t know if it will directly impact UVM,” said Corey Berman, Recycling & Zero Waste program manager. “We’re already attempting to divert organics from the landfill, we have to anyway by law.”

Act 148, Vermont’s Universal Recycling law, was passed in 2012, according to the Vermont Official State Website. The law has since been updated in order to take different types of waste into account.

“[The government is] hungry for our research and our data because they may be interested in some sort of policy,” Hobson said.

The group involved engineering professor Matt Scarborough in their research, who helped with the chemistry for it, Porterfield said.

This data could potentially change the way Vermont, and subsequently UVM, deals with packaged food waste in the future as well as its byproducts, Hobson said.