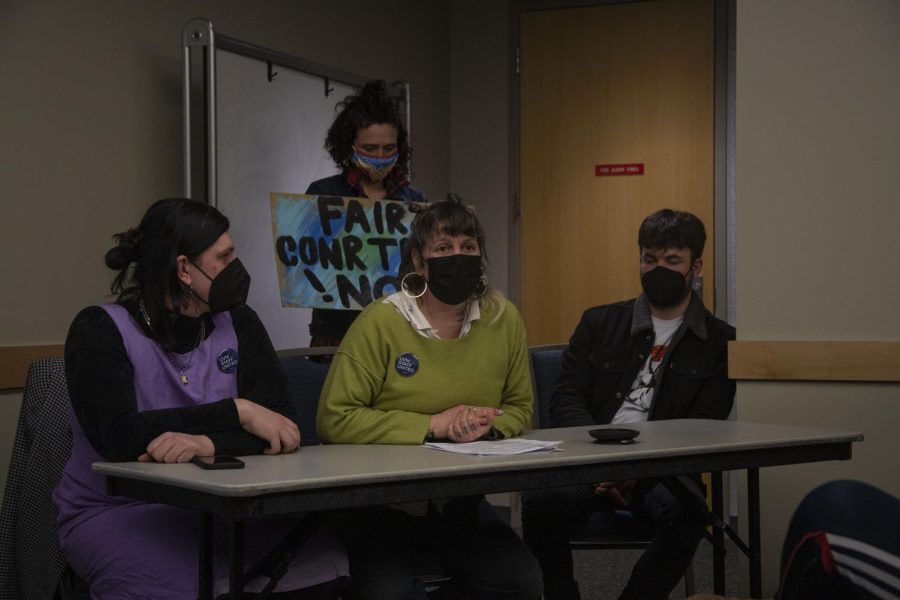 Members of UVM Staff United speak at a town hall meeting Feb. 17. The meeting took place in the Jost Foundation Room in the Davis Center.

Editor’s note: This story was updated Feb. 24 at 9:30 p.m. to remove the name of the Asian Student Union from those who attended the town hall meeting.

Staff struggle with food insecurity, government aid needs and housing, said Annie Valentine, education and training manager in the Center for Wellbeing. United Academics, United Electrical Workers 267, the Graduate Student Union and the union of students joined in support at the town hall, according to a Feb. 17 email from Valentine.

“I hear these stories of people sobbing that they can’t pay their electric bills in the middle of the winter,” said Jay Hardesty, Catamount Farm program coordinator and Farmer Training Program lead instructor.

Hardesty said many staff members are on the Special Supplemental Nutrition Program for Women, Infants, and Children, as well as the Electronic Benefits Transfer programs and still can’t afford food or bills.

UVM Spokesperson Enrique Corredera did not comment on the topic of staff needing WIC and EBT to afford the cost of living in his statements to the Cynic.

During the town hall, staff member Crispina Pincus, office and program support generalist in the leadership and developmental science department, said she relies on relatives to help her keep up with living expenses.

Many staff members making below $20 an hour received a pay cut during the pandemic, Valentine said. These conditions caused a significant drop in staff morale.

There was a 3.5% reduction for staff who make between $60,000 and $80,000 and those who make over $80,000 per year received a 5% reduction, according to the email. All of these pay cuts were temporary and were reversed within the same fiscal year that they were implemented.

“Many of us who are in this field have chosen it because we care so deeply about student development, about the [college] experience [and] identity,” Valentine said. “How do we get to honor those and spend time when we’re all feeling really exhausted?”

Staff endures these hardships despite the University being in the best financial shape it has been in for a long time, according to a Feb 16. email from David Feurzeig, UA member and professor of music.

“The big picture is that the University has a substantial surplus,” Feurzeig said. “At the same time, UVM makes budget documents year after year that say, ‘we don’t have enough money to pay for instruction, to pay for support, we have to cut back.’”

UVM must make sure that it closes each fiscal year with a positive fund balance, according to a Feb. 19 email from Corredera. The University also has to reserve funds for future endeavors in another fiscal year.

The University is committed to compensating its employees fairly and competitively based on their performance, according to Corredera’s email. UVM raised the minimum wage up to $15 an hour last year, a minimum higher than federal and state levels.

UVM also offers its employees a comprehensive benefits package that includes tuition remission for employees and dependents, medical, dental, and other benefits which increases the total compensation. Health insurance premiums and parking permits are also based on a graduates scale pertaining to wages, according to Corredera’s email.

Staff aims to continue negotiating for a livable wage that allows them to afford the expenses that come with living in the Burlington area. UVM has more than enough money to afford the pay increase, Hardesty said.

Staff are continuing to negotiate with administration in the upcoming weeks. Staff United is holding a Honk and Wave event, holding posters by the road, to garner awareness and support for their fight, March 3 at 4:30 p.m. outside the Davis Center.