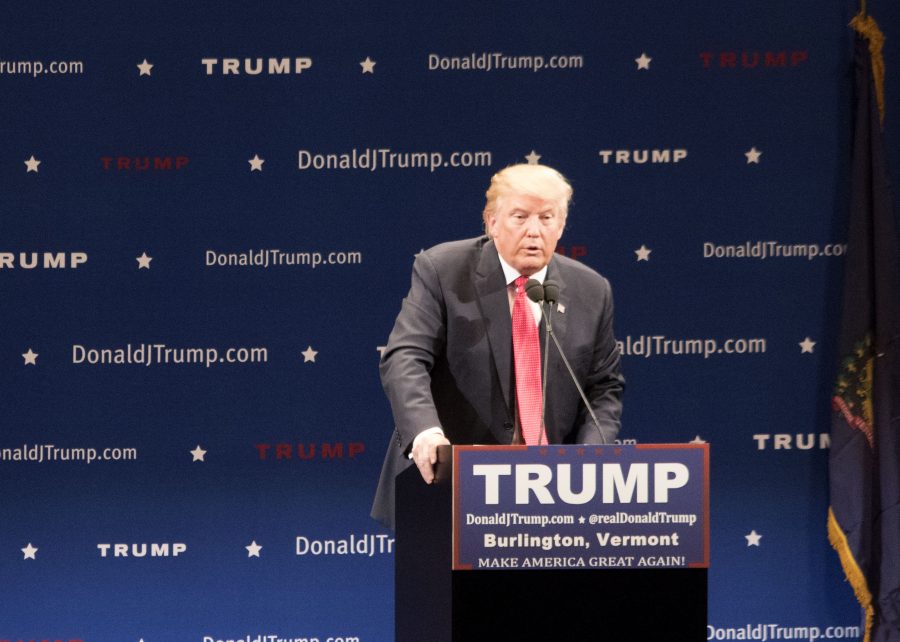 Two UVM students said they were removed after  protesting a Donald Trump rally held at the Flynn Performing Arts Center Jan. 7 in Burlington.

First-year Greer Sargeant and senior Lily Sargeant chanted “get Trump out” during the event, feeling the rally was racist and his speech lacked substance, they said.

After hearing Trump’s proposal to build a giant wall on the Mexican border, the sisters jumped out of their seats, shouted that Trump’s comments were racist, and began chanting.

The two were filmed at the rally in a video by media outlet AJ+.

The two women were quickly ripped from their seats and escorted out of the venue, they said.

“We were yelling ‘get Trump out’ and yelled about how they kicked out the only two black people in the audience; we called him a racist,” Lily Sargeant said.

The Sargeants don’t believe they were escorted out because of the color of their skin but said the rally had a racial element.

“People outside, in line, were wearing KKK hoods and had signs with race crossed out,” Lily Sargeant said. “Trump is an overt racist and complete outward bigot and the fact that Vermont’s stance on his racist behavior wasn’t addressed drives me up a wall.”

“All the media is doing is just portraying how we were forcibly removed and not about the racial tension we felt as black women at the rally,” Greer Sargeant said.

We knew from when we stood up we were going to be forcibly removed, Lily Sargeant said, and that’s not the issue; the issue is with Trump and Trump supporters’ overtly racist behavior.

“There were certainly racist undertones to his speech,” Maulucci said. “ Whether it be his asinine proposal to deport millions of people and build a wall on the Mexican border, or his call for a ban on Muslims entering the United States, Donald Trump hold bigoted views that are antithetical to American values.”

As a white male, Maulucci also uncomfortable by the racial element within the rally.

“I was uncomfortable, not only with the positions that he holds, but by the level of support that he’s receiving, even in Vermont, apparently.”

Senior, and SGA Treasurer, Roger DaGama, who was part of one of the last groups to be let into the venue, believed Trump was trying to avoid the issue but said Trump’s rhetoric was racially suggestive.

Jamil Handy, who never made it inside the venue, said he didn’t witness anything overtly racist.

“Maybe it’s because I’m white and I need to check my privilege but I really didn’t notice anything too offensive or distasteful,” Handy said.

While racial insensitivity fueled their protest, the sisters still feel that Trump’s private security and supporters were overly aggressive.

“People waved and shoved signs in our faces, one guy pushed my sister, getting her foot stuck in the seats,” Lily Sargeant said. “A few people even yelled ‘get the fuck out’ in our faces.”

“Somebody pulled me, hard, from my seat. I was stuck and they just kept pushing me,” Greer Sargeant said.

The Trump campaign gave out around 20,000 tickets for the venue, which can only seat around 1,400, and a massive line formed nearly around the block.

“We were waiting in line for 4½ hours and right at the door they were screening people,” Greer Sargeant said. “They asked if we were Trump supporters and we had to lie to get in.”

Once outside, the sisters said they felt a wave of support from the crowds of protesters lining Main Street, and the local police attempting to keep the peace.

The two were not charged with any crime, they said.