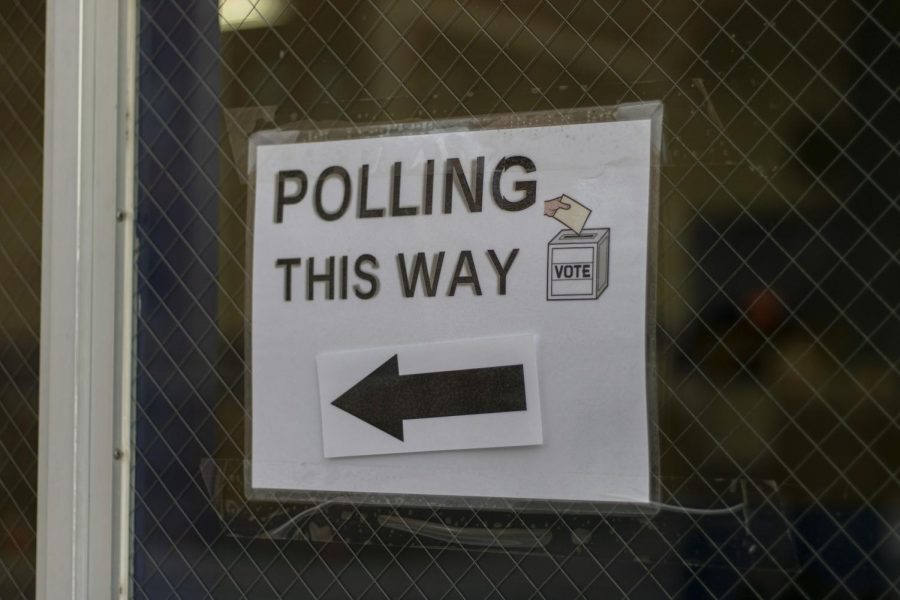 Signs point to the polling place for potential voters Nov. 3.

As vote counts for the Presidential Election continued to trickle in following Election Day, UVM students anxiously waited, reflecting on the tumultuous weeks leading up to it and what’s next to come.

Although Joe Biden was not announced the winner until Saturday morning, UVM’s Office of Civic Engagement held affinity spaces for students of various identities to process the election in the days that followed Nov. 3.

Stepping out of the Mosaic Center for Students of Color following the Nov. 4 affinity space for BIPOC community members, Senior Crystal Zhou said she’s hardly had time or energy to focus on the election.

“To be honest, I know that no matter who wins, there’s nothing I can do about it,”  said Zhou. “I already voted and it’s out of my control now.”

Zhou said she’s been mostly focused on applying to graduate school, but that the current political climate has exhausted her emotional energy.

“I’m a person of color on this campus and it’s been hard for me,” said Zhou. “Also, because of this pandemic, there have been a lot of racist attacks against my community.”

She said she’s frequently had to privately message people who have posted controversial or offensive things on social media, and it’s been a large stressor in her already busy life.

Throughout the day Wednesday, other students on campus including First-year Wyatt Knowlton anxiously awaited the results to come in, hoping for news that Biden would be the next president.

Knowlton said he’s been watching the election closely and meticulously trying to calculate the many factors that could contribute to a win for Biden, including mail-in ballots that have yet to be counted.

“It’s stressful waiting and I think the most important thing for me has just been trying to keep myself occupied with other things,” Knowlton said.

Knowlton said the stakes are high in this election, and that a Trump re-election would be an unfathomable loss to him.

“I would be lying if I said that I hadn’t taken a look at Canadian immigration laws and such things. But who knows,” said Knowlton. “I think I’ll just have to jump off that bridge when I get to it.”

Like many other students, Knowlton said the one positive effect of this election was the voter turnout and said that this was likely due to the fact that many people received mail-in ballots.

Other students on campus including UVM Sophomores Viv Billman and Amanda Roche were also on edge about the results coming in.

“I’m scared,” Roche said. “I am one red county away from a Brittany 2007 level breakdown.”

Both students said the emotions around campus were filled with similar anxiety, and that students seemed rather dejected following Election Day.

“I think it’s been a lot of nerves and nervousness,” Roche said.

Billman hopes to see results in the next week for the election and was impressed with voter turnout in the UVM community.

“There’s been a lot of push to vote, so that’s good,” Billman said.

At the Davis Center, Juniors Eliana Pansegrouw and Wendy Schiller also said they were struck by the sober atmosphere on campus after arriving from their off-campus residences.

“We just got here,” Schiller said. “But it feels very somber.”

Schiller said her emotions over the past 24 hours have fluctuated but says her confidence in her preferred candidate Biden is growing as results come in.

“In the 2016 election, nobody was really that worried about it,” said Pansegrouw. “Everyone thought there’s no way [Donald Trump] could win.”

Schiller agreed and said that the 2016 election felt like a joke.

“Now there are record numbers of people coming out,” said Pansegrouw. “I think people are now cluing in.”

First-Year Student Andrew Banno said he is anticipating a Democratic win and was similarly impressed by the voter turnout and the energy around voting among students.

Banno said he has felt great support and encouragement for voting in the Wellness Environment learning community where he is living on campus.

“Everyone is talking about going out and voting there,” said Banno. “The energy is really strong.”

Banno said he has remained optimistic throughout the election, despite the race being closer than he had hoped.

“There’s a good chance Biden can win, and that would be huge,” said Banno. “I’m hoping Biden takes it.”