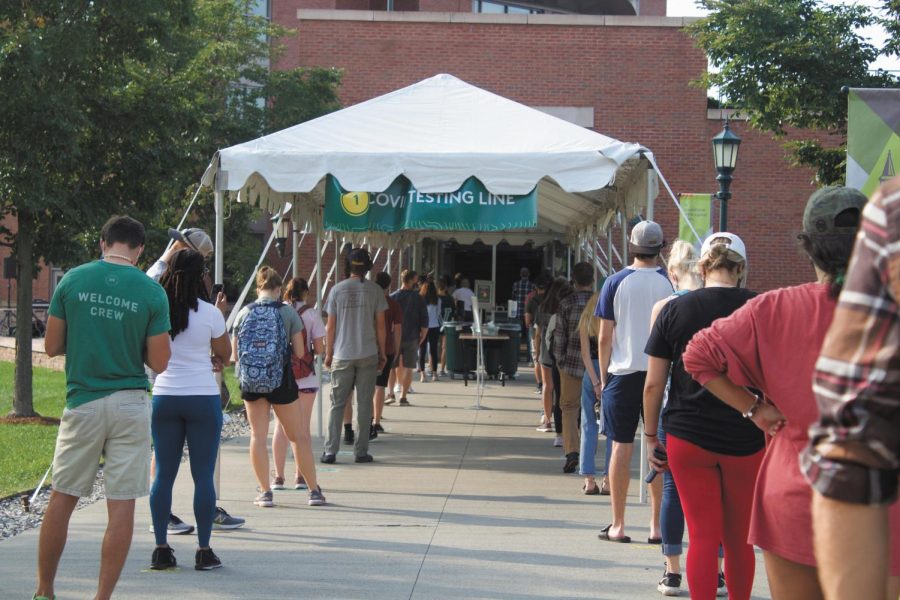 UVM students stand in a long line outside of the Davis center Covid testing site, Sept. 10.

UVM is extending twice-weekly-testing for all students an additional two weeks, following an uptick in off-campus COVID-19 cases.

According to a March 19 email from Garry Derr, Vice President for Operations and Public Safety, UVM will continue this heightened testing pattern until at least April 3.

In the email, Derr also alerted the community of 51 new positive cases since Monday, 44 of which were from off-campus students. The remaining seven cases were reported on-campus.

Although there has been an “alarming” increase in COVID-19 cases off-campus, Derr stated that the school may loosen restrictions for on-campus students as early as Monday of next week.

“Five of the [on-campus] students impacted were already in quarantine thanks to contact tracing,” the email stated. “If this trend continues through Sunday, we feel optimistic about amending the on-campus guest policy next week.”

UVM received multiple reports of student gatherings happening within the Burlington community on Wednesday night, St. Patrick’s Day, the email stated. The size and locations of these gatherings were not disclosed.

“Twice weekly testing will help us identify positive students and prevent the potential spread from these gatherings,” the email stated.

Moments after Derr announced the continued testing, Vermont Governor Phil Scott laid out the schedule for all adult Vermonters to get a COVID-19 vaccine.

According to the governor’s plan, each remaining age band will be able to register for their first vaccinations by mid-April.

Vermonters, aged 16 and up will be able to register by April 19, according to a March 19 Department of Health press release.