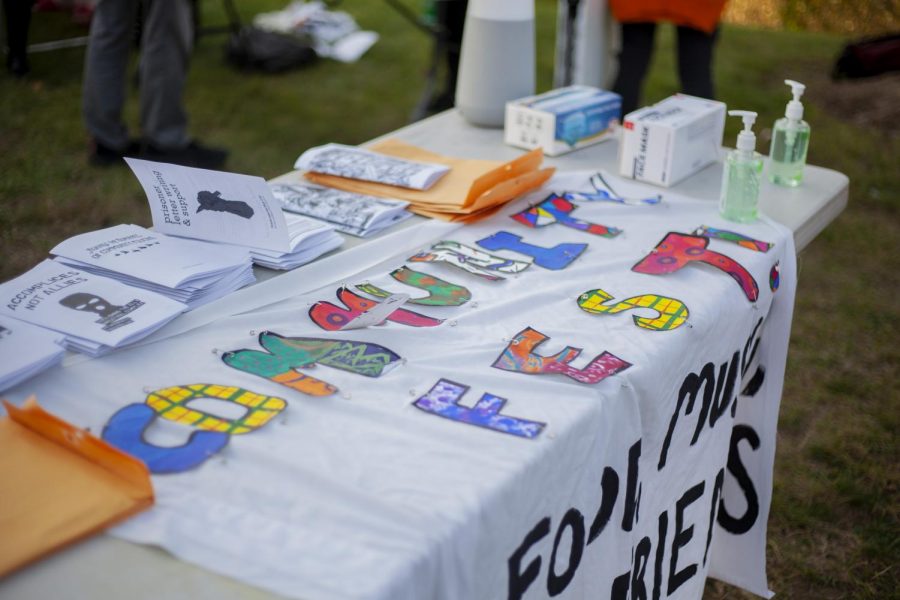 Letters pinned to a table spell out “CommunityFest” and pamphlets are laid out to be passed out on the Athletic campus green Oct. 1.

Students and Burlington community members alike gathered on the Athletic campus green Friday night to attend CommunityFest, an event organized by the UVM Union of Students.

The event featured an assembly of local activist groups. It aimed to create connections among the community and give voices to parties that are often ineligible for participation in University-sponsored events, said senior Chrysanthemum Harrell, member of UVMUS since its founding in spring 2020.

UVMUS is a democratic coalition of students, dedicated to making UVM an open and safe environment for everyone, according to their Instagram bio.

The event began with opening remarks from Harrell who was one of the primary organizers of CommunityFest.

“The University would appreciate it if the rich history of community organizing here on campus would die,” Harrell said. “But we can’t let that happen.”

Harrell’s speech recounted the history of student activism on campus, with a focus on the Howe Library, formerly Bailey Howe, named in commemoration of an individual closely tied to Vermont’s eugenics movement.

Several groups attended the event to engage with visitors.

Local food share organization Food Not Bombs Vermont offered meals at their table and the Little Red Book Club, a group aiming to educate people about communism through literature, offered books for visitors to take with them.

“College gives students an avenue to explore their social and political beliefs, in a way that they wouldn’t get to do when they were at home,” she said.

Gehan attended with the Vermont chapter of Explain the Asterisk, a group that aims to prevent sexual violence and bring survivor voices and experiences to the forefront, according to their website.

Harrell said she was pleased with the success of the event as well.

“I’m just so happy to see so many people come out and engage with the community, and give space for all of these wonderful community groups doing really important work,” Harrell said.

UVMUS has not publicized any plans for future events as of yet, but Harrell said the organization plans to work on supporting their growing organization and community outreach.