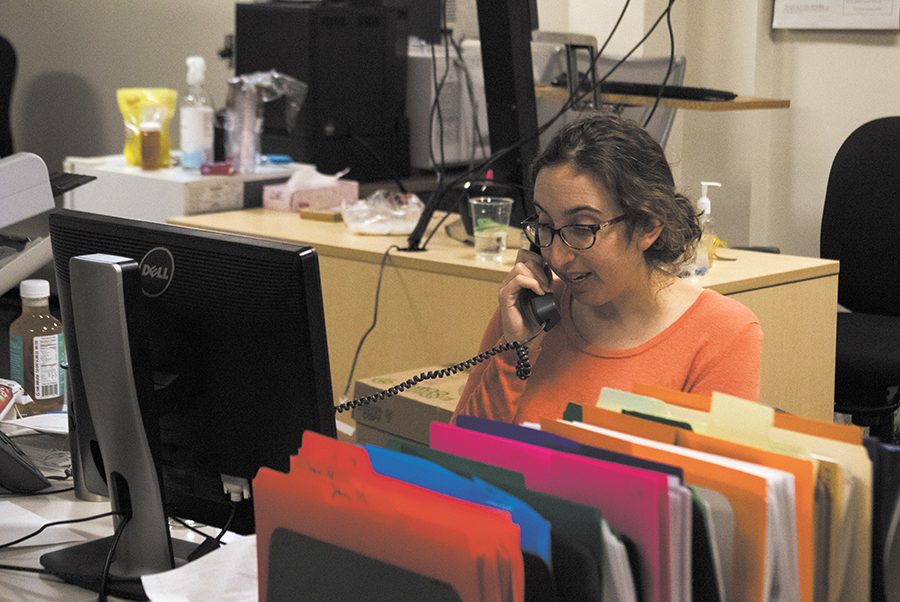 A worker at the Vermont Consumer Assistance Program takes a call Jan. 18. Students can work for CAP by mediating disputes between businesses and consumers, spreading information about scams in the Vermont area, for class credit.

The Vermont Consumer Assistance Program, based at UVM, gives students a chance to work directly with economic law in Vermont.

Since its creation in 1981 as a resource for consumers and understaffed legislators, CAP has worked closely with the University and students to handle conflicts between consumers and businesses.

Jay Ashman, founder of CAP and professor emeritus of consumer law at UVM, started the program after the previous consumer advocacy program moved to Montpelier.

When offered the opportunity to return and collaborate with an economics department, Ashman was eager to expand consumer law courses. The new program became CAP, he said.

The program receives most of its funding from the attorney general’s office, but as its staff grew in size, the University provided most of the manpower.

“Each of the two parties got a lot of bang for their buck, and when students put it on their resume it always stood out,” Ashman said. “It was service learning before the term service learning was popular.”

Enrolled students spend eight hours a week mediating disputes between businesses and consumers, spreading information about scams in the Vermont area and documenting changes in business practices that might lead to new legislation, Clark said.

“Students are very close to the action of consumer law here in Vermont,” Clark said.

“The class is almost an internship,” she said. “It could lead to opportunities either at CAP itself or associated work in the attorney general’s office.”

James Mooney ’18, who now works for CAP, said he found the experience to be a good entry point for a career in law.

“I wanted to go into law and CAP allows me to work with lawyers, attorneys and the attorney general right out of college,” Mooney said.

“At CAP, students  learn real time conflict resolution and other skills very marketable to employers,” Pfefferie said. “I took the class one semester, was hired the next, promoted after that and now I’m supervising students.”

Aside from work experience, CAP directly affects the community.

CAP’s internal records show around 15,000 calls per year from consumers, with up to $18,000 recovered for a single case, Clark said.