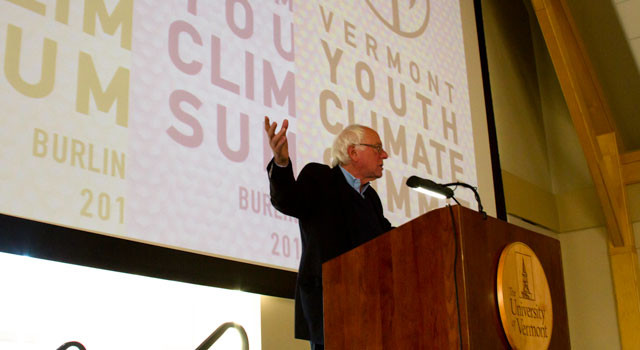 More than 150 high school students and dozens of teachers representing 26 Vermont high schools attended the summit in the Davis Center, according to University Communications.

During the summit, students attended 10 workshops, five in the morning and five in the afternoon, which covered different elements of climate action planning.

UVM students enrolled in an ecological economics course this past fall led the workshops, as part of one of their assignments for the class. The assignment was to “collectively organize a climate summit for young Vermonters,” according to University Communications.

“The summit provided a great opportunity not only to help students develop action plans that will tangibly decrease the carbon footprint of their high schools,” said senior Amelia Fontein, an environmental studies major who took the course.

“But also to pass along to younger peers some of the optimism and passion we feel about addressing climate change.”

Fontein said Sen. Sanders’ involvement has been key to their success recruiting students and underscoring the importance of the issue.

“The University of Vermont was honored to host the inaugural Vermont Youth Climate Summit in partnership with Sen. Sanders,” said professor Jon Erickson of the Rubenstein School of Environment and Natural Resources, who taught the ecological economics course.

“Our students took the lead in recruiting the high school teams and in organizing a series of engaging workshop sessions. The summit was a very successful event, and they deserve a great deal of credit,” Erickson said.